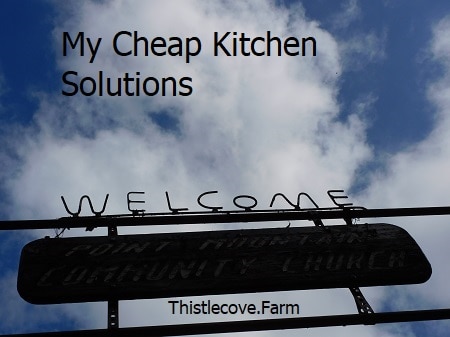 It’s that time of year when it seems everyone wants something, mostly monetary donations. I’m here to keep more of the dosh in your pocket; it may seem like only pennies but like Benjamin Franklin said, “Watch the pennies and the dollars will take care of themselves”.

My first frugal solution concerns the kitchen. Some of the frugal things I do I think are common knowledge but then I’ll talk to someone and they’ll say, “WHAT?! That’s genius!”

You may use newspapers to line the trash can bottom and that’s a good thing. A great thing is to use a  puppy pee pad which will absorb and contain as opposed to simply absorb. (Read to the end for a give away.)

Bay leaves have a myriad of uses both in the kitchen and medicinal but I, most frequently, use in soups, stews and other dishes. I also use them in flours, grains, cereals and meal to keep bugs at bay…yuck yuck.

A tea towel under the coffee/tea set up is normal but a towel under the animal water dish helps with drips and spills. That towel is also on one of those old school lunch trays which is also helpful. One of the Inky Cats like to play in the water dish; he can be heard splashing around, playing and, eventually, comes to me to have his right leg/paw (always his right) wiped dry.

A non-slip pad is put under whatever tray is likely to slide around on the counter and also under the animal’s water dish.

A dot on the top of the electrical cord lets me know how to plug in the appliance. I’m one of those safety conscious people who unplug small appliances after use.

Kitchens are usually set up in a triangle with stove, refrigerator and skin at each point. In order to keep the flow even easier, my dishes and utensils are located as far from that area and as close to the table as possible. Having the flow spread out means more people can help in the kitchen without running into each other.

My dishwasher is showing signs of age so in addition to cleaner I use a booster. It’s fabulous for getting the dishes sparkling and I’ve gained more years (hopefully) out of that appliance.

Before starting the dishwasher, run the hot water in order to get full benefit from the wash cycle. While the water is running, I’ll capture it in a pitcher and use to fill the animal’s water dish.

Because my animals live in the house, I use a lot of paper towels to wipe up their messes. For my messes I use cotton or linen towels that can be washed and reused. Inexpensive paper towels are a small luxury for me and I know loblolly pine “plantations” are grown for pulp paper, paper towels, toilet paper, etc. Those loblolly pines produce no food whatsoever for animals or humans and are grown expressly for paper so there’s no shame here. I absolutely despise microfiber everything but to each their own.

By the way, January white sales are coming up if you need to stock up on towels, dish cloths, etc. I just bought six white washcloths for about $1 on the Black Friday sale. I wait until late afternoon to buy what I need, knowing people are going for the big stuff and not the little stuff. I use the inexpensive washcloths as cleaning cloths as they last better than cutting up a sheet for rags. I don’t use washcloths in the shower so no supply there.

Slowly, but surely, I’m going away from plastic bags and toward glass containers for food storage. Unlike plastic, glass is recyclable, can be cleaned and reused many, many times. I’ve got some pretty cute glass containers that once housed olives and even Bell/Mason/other jars can be used to freeze food. If I do have to use plastic bags, I always use the freezer type as they’re sturdier and hold up better.

When the cleaning products I have now run out, they’ll be replaced with hot water, vinegar, baking soda. I’ve got gallons of cleaning products but will only keep Murphy’s Oil Soap, NokOut and…hmmm, drawing a blank but it won’t be much. Dawn dishwashing detergent cleans just about anything as does Murphy’s Oil Soap. NokOut eliminates odors; especially useful for litter boxes, dog throw up (have I got stories!) and the like.

I’m getting better at going through the refrigerator and pantry…more frequently. It’s easy for food to get lost amongst the jars and cans of whatever. Obviously I need to do this more often as last week I found a yogurt container that was severely past due date. Severely. ahem I’m guilty of buying things on sale and leaving them sit so now I put on the calendar when to check dates.

In addition to cooking from scratch, make your own croutons, here. My shortbread can be made and ready on the plate to eat in thirty minutes and if you want to gild the lily, ice cream or sauce (chocolate or caramel) is a nice touch.

A cuppa cuppa cuppa cobbler of peach, blueberries or other fruit is quick and easy using fresh fruit in the summer and canned in winter. There are other, more intensive, recipes, but this one, here, is the one I like best.

For a winter breakfast, baked oatmeal, here, is wonderful especially on a bitter, sleety, cold, windy day like today. I also like it because once it’s fixed, it waits on me to bake.

This isn’t a big money saver in the outlay sense but rather a treat. Last week I bought a rib eye steak on a huge discount, brought it home and carved it into chunks to make an Irish stew. I took that stew, a homemade apple cake and bread to my parents and we shared supper. When I left there was enough for our three suppers the next day.

Speaking of apple cake, the left over apples need to be made into another cake and time’s wasting.

What are your favorite way to save money in the kitchen?

P. S. Apologies but I forgot about the giveaway. The first three people to ask for a puppy pee pad for their trash can, will receive one in the mail. Just regular mail, mind, so if it goes awry, don’t blame me. Just claim it  here then send me your snail mail address.