Granny and PawPaw Lynch lived beside my parents; in fact, it was PawPaw who sold my parents their acreage to start their own homestead. Daddy grew up on an Appalachian homestead doing all those things one imagines on a hardscrabble farm. They raised most everything they needed to eat  (milk cow, chickens, hogs, garden, hunted, fished) and for many decades bought only salt, sugar, cloth for making clothes and farm tools. At twelve years of age Daddy started beekeeping which cut down on what white sugar consumption, there was, and that helped with the finances. Daddy also trapped beaver, foxes, swamp chicken (muskrat) and other critters for their pelts which were sold for cash. The first squirrel he shot is stuffed and sitting upright in their basement now. 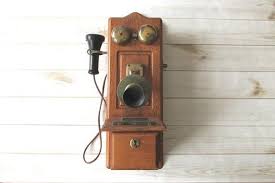 I well remember being held up to the wall mounted telephone, mouth to horn, receiver to ear so I could talk to Aunt Esther who lived miles and miles away up river. Although Grandmother died in 1963, the party line lived on until 1996 with everyone knowing everyone else’s ring…Grandmother and Granddaddy’s ring was one long and five shorts, meaning one loonngg ring followed by five quick, short rings. Early days, Aunt Bonnie didn’t have a phone; as Daddy said in a somber tone, “Bonnie was hard pressed to put water gravy on the table and a phone was a luxury for many, many years.” Aunt Esther didn’t have a phone because she and Uncle Clarence used the company phone when needed. Actually, everyone at Number 4 used the company phone, no sense in wasting hard to come by money. Aunt Ruth’s number was a long followed by 2 shorts and everyone in between had their own ring and when anyone’s phone rang everyone would run to their phones to hear the news. It wasn’t gossip as much as it was news; there wasn’t a newspaper or radio much less a television. Even today, without satt you can’t get television, only sporadic radio and the paper is once a week. All four pages of it! (P. S. Although the party line lived on, folks got the new fangled phones…receiver and speaker in one piece, attached to the dialer by a cord. It was around that time, people also got a simple ring but…BUT…when someone’s phone would ring, there would be a little blip of a ring on everyone else’s phone, alerting them to “someone” getting a call. Folks would still rush to their phones, anxious to celebrate the good news or be sorrowful at the bad.)

The photo above is a building PawPaw (not my real PawPaw but my connected PawPaw, meaning we weren’t blood line kin but connected blood line kin) built when he first set up his homestead. PawPaw was born in Pittsylvania County and, as a young man, heard about land for sale in Amelia County. When he arrived in Amelia County in the early 1900’s he had a horse, a woman and an adz. With those things things he and Granny built a legacy and, when he died, (Granny died first) he left several hundred acres. That building is of slab wood; wood that’s split from a log and all pieces are used, not just the heart of the wood. In West Virginia, folks would build houses of slab (slab houses), using wood from saw mills the miller couldn’t sell to factories. Some of those slab houses are still standing and being used.

Daddy called me, regular ring, and said, “The apples are hanging at Levi’s place and Wayne (PawPaw’s grandson) said to come get them.” Y’all know by now when Mom or Daddy call and say, “Come…”, I go. When I got there, Daddy was working in the garden (it was “only” low 90’s that day) and said, “I’m going to the house, you go pick apples”. I climbed in the Gator and down by the pond I went, over to the orchard. Once I got there, I made a bit of noise, ran the Gator in a circle to alert any snakes it was time for them to leave.

Windfall apples are those you find, with the exception of labor, for free alongside roads, old orchards, pastures, woods and old homesteads. These apples are windfall apples and will be made into apple butter, apple sauce, pies, apple and walnut bread, sausage and apple quiche and anything else I can think of. Or, until they run out. The old shed is another PawPaw built, the Gator is Daddy’s and the picker belongs to my brother. Steve jury rigged the picker so it’s extended for another three or four feet which is nice but difficult to use as it’s unwieldy. Still, better than climbing the tree. 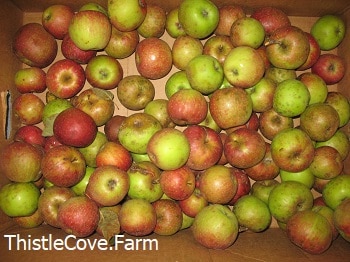 I picked about 2 bushes, left half with folks and brought half home. The first turn of apple butter is made and need to ready more apples for the next turn. I used to make apple butter over an open fire using an old iron kettle  (which I still have) but with no one to help, it’s a lot of work for one ole woman. The crock pot works well but not as much fun. There’s no butter in apple butter but the name distinguishes it from apple sauce. My apple butter has cinnamon, nutmeg, cloves, vanilla, brown sugar and demerara cane sugar and, if I have it, a splash of cider. If I don’t have cider, I’ll use a bit of water to help things along. 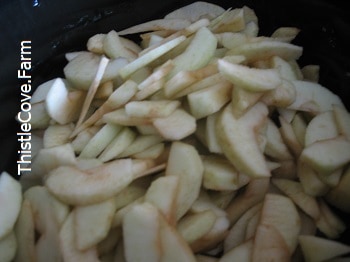 The apples are quartered, cored, peeled and sliced, in that order. You may do it different and that’s fine; there’s no right or wrong, just get the danged things in the kettle! A lot of cooks say use lemon juice to keep them from turning brown and I ask, “Why?” They’re going to turn brown anyway so why waste the time, effort, energy and money? I do things very similar to the way they were done in Appalachia by my kin. After all, if it ain’t broke, it don’t need fixin’, eh? 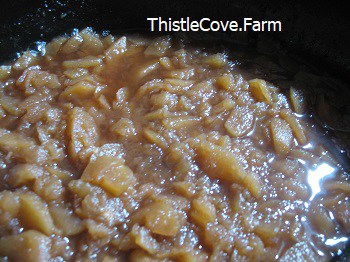 I made biscuits and ate with apple butter, cherry jam made late last year and butter. A big ole glass of milk completed the meal and it was GOOOODDDD! 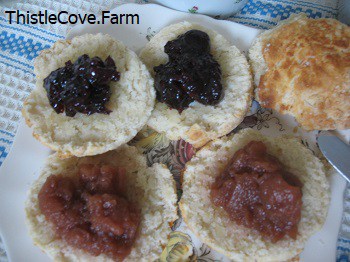 These aren’t my usual cat head biscuits but they were still fluffy on the inside and snappy on the outside. I always daub the tops with butter to help the browning process. The lower biscuit has butter and apple butter while the upper biscuit has butter and cherry jam. Something else I do differently is leave the apples with soft chunks of apple. I like a bit of tooth to my apple butter and even apple sauce…which reminds me, the different between the two are the kinds of spices used. There are fewer spices used in apple sauce, still just as good and I use both sauce and butter in making bread.

“k” asked for the recipe. Sad news…no recipe as I’m a cook, probably like your own Granny, who goes by a bit of this and a tad of that the taste to see if acceptable. I also don’t know, no one does, what kind of apple trees these were; it was enough to know they were free. 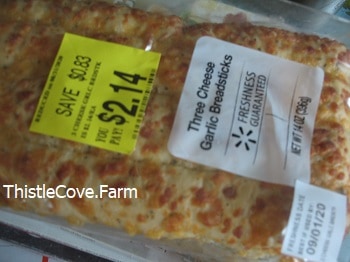 While I was in the kitchen I made croutons. When the store has bread on sale because it’s on or near the expiry date, I buy it. When I get it home, it’s sliced into bite sized pieces, distributed in a baking pan, a stick of melted butter poured in, mixed and slid into a 250 degree oven for about 90 minutes. I’ll taste and if it’s still soft, I’ll bake it for another 30 or so minutes. At this point, it’s a matter of watch, wait and see. 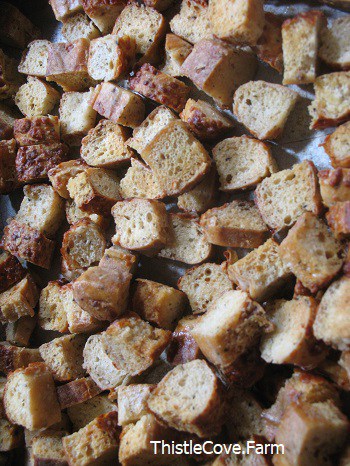 These croutons are garlic, three cheese and butter and are delicious! I’ve been known to eat them out of hand, just like chips. Any old bread will do but if it doesn’t already have seasonings, you’ll have to add your own. Do you like garlic? Add fresh, chopped or minced garlic or even garlic salt. Italian seasoning works well as does fresh, minced rosemary or basil. Whatever you already like will be good in your croutons.

When I get to the bread making stage, I’ll have a recipe (hopefully) but I’m not much on recipes as I think they’re mainly for suggestions. Even the flops can be made into something else…for example, if the strawberry jam doesn’t set, it’s used as  in trifle or as a topping for cake or shortbread or even made into strawberry ice cream.

Mercy! So many memories, good times, sad times, good food…I hope you’ve enjoyed this trip down memory lane as much as I have. What are your earliest memories? I hope they’re good!

Share248
Pin
Email
248Shares
« Can One Die From Takotsubo Cardiomyopathy?
My Other Self »

248Shares
This site uses cookies to ensure that you have best experience on this website. If you continue to use this site, I will assume that you are happy with it.OkayPrivacy Policy