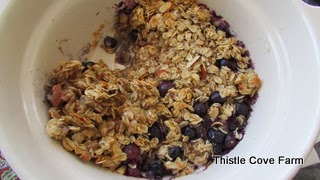 ~ baked oatmeal with almonds and blueberries ~
My contribution to Vicki’s Grow Your Blog Party is here; there are two giveaways.

There are some mornings that call out for baked oatmeal; today was such a morning. At dawn, around 7:00, it was about 10 below zero; at 1:30’ish a.m., it was about 15 below zero. When it’s this cold (and I remember), I like to have breakfast waiting on me when I return to the house from barn chores. I also don’t go to the barn before the sun is well and truly up. If there is an accident, it’s a tad warmer after the sun comes up and I’ve a better chance of crawling back to the house. I don’t want to think about these things, but I do think about them, now that Dave has passed. I’ve always planned out “what if” and pondering “what if” kept me from being raped and murdered some decades back but that’s a story for another time.

Baked oatmeal is wonderful! I’ll give you my recipe and if you’re one of those cooks who do it by feel, you’ll love this recipe. If not, trial and error is your new best friend. I’ll give you measurements but I don’t measure, not this dish anyway. I just throw it all together, add whatever fruit and nuts I have on hand and call it breakfast.

1.5 cups oats – I use the real deal, you can use quick
1 tsp baking powder
dash of salt
dash of ground cinnamon
1/4 cup veg oil – I use corn oil, none of that machine oil canola for me, ta very much
1/4 cup sugar – white, brown, or couple tablespoons of honey
1 large egg unless all I’ve got are smalls or mediums and then I’ll use 2
1 tsp vanilla – again, the real deal, no artificial stuff, please and I use about 1 tbl.
1/2 cup milk or cream – whole or half ‘n half – please, just eat less but eat real
blueberries – maybe a cup, maybe more…what I had
almonds – what was left in a 2 ounce package

Oil a baking dish, about a 2 quart size or whatever you’ve got. Seriously, it’s going to bake in anything so don’t go out and buy the “right size dish”. Puhleez.

In small bowl, mix oats, baking powder, salt, cinnamon. In another bowl, mix the wet ingredients, fruit, nuts and sugar then mix with dried ingredients. Pour into baking dish and bake at 350 degrees F until golden with crackly surface. To serve, I heat some milk and pour over the top.

I use a convection oven and bake for about 20 minutes at 325…perfection!

This is some serious eats and will hold you until you’re hungry again. No, really, I’m serious!

Sophie Shetland was on her feet this morning; thank You, God! Of course, this afternoon she was cast but hey…this morning she was on her feet after a particularly viciously cold night. I’d love to get some of Carly’s arthritis meds into her but she’s not eating all that well. I think she’s checking out but, because she’s a primitive breed, it’s going to take her some time to actually leave this veil of toil and tears. 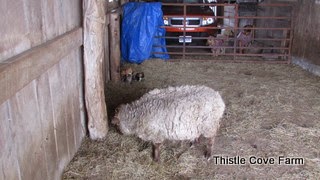 Harry Shetland was on his feet and stumbling around, blind, and that’s not intended to be a joke. My heart goes out to him, not being able to see where he’s going, yet he still manages to be mobile within his confined space. He has fresh, warmish water, food and shelter so he has the basics. I’ll keep him as long as he’s breathing; I don’t throw something away because it’s “inconvenient”; never have understood that attitude. God willing, we’ll all get old one day and I want to think someone will love me until the last breath. 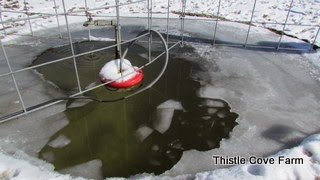 The temps are cold, very cold, and even with a de-icer the water trough is freezing almost solid. There’s no way the horses can get a drink of water so that means… 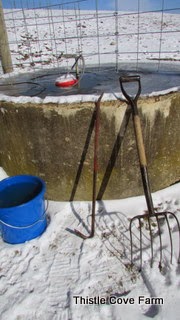 getting out the pitchfork and crowbar and busting ice. Yeah, I know you’re supposed to say breaking ice but, trust me, busting is more what it feels like. 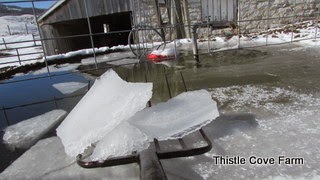 Even with the de-icer, the ice is close to three inches thick and this is just overnight. I’ll go down, just before dark, and break what’s formed since mid-day. It’s a lot easier to do it piecemeal than let it get ahead of me although, overnight, it freezes rather solid. 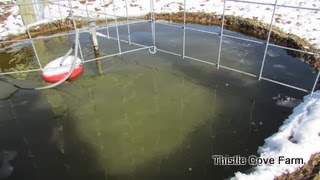 Yes! Now a water trough the horses and alpacas can drink from; the sheep have a smaller trough and I’ll break that ice as soon as I finish posting this. I’ve still got to get in wood for the stove; it’s going to be a long night and far safer to do it now, while it’s light. 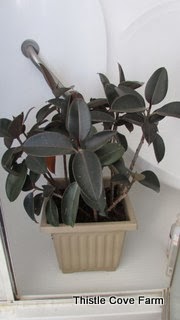 Another little something to make my life easier…when the big plants need watering (and they need water constantly due to the wood stove), I put them in the shower and give them a huge drink. When it over runs it doesn’t get on the floor.
Yesterday, when the dogs and I used the Ranger to go get mail, a fellow up the road left me some Christmas trees. He has a lawn service in the summer and a Christmas tree service in winter and noticed me picking up cast off trees in town. Apparently, he asked around and someone said, “Yeah, that’s crazy old Sandra; she picks up trees to give to her sheep.” So, he called and said, “I’ve got some left over, want them?” Well heck yeah and now I’m going to bake him some shortbread to say, “thanks!” 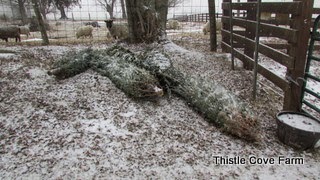 Daniel Jones threw these trees over the gate… 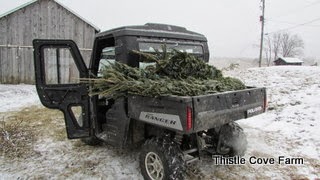 I loaded them into the Ranger…two trips… 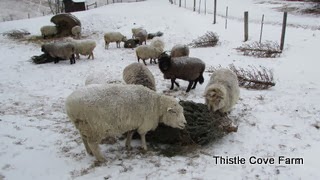 and took them to the sheep lot. My wooly babies say, “Thanks Daniel Jones!” 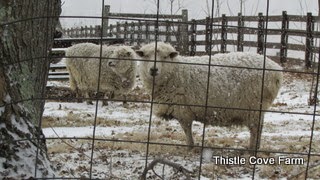 So, here’s looking at you and hoping you’re having a warm day. BTW, I just received a telephone call from someone who is now absolutely positive I’m a cantankerous old biddy. She’s right but I feel I have good reason. The call starts out, “Hello, may I speak to Sandra.” “Yep” because I already know it’s someone I don’t know and, more than likely, don’t want to know. “My name is (whatever she said because I knew I wasn’t going to have to remember) and I’m calling you because of a very important bill that concerns our environment.”
“Okay,” says I, “read it to me.”
“Um, what?”
“Read it to me, please.”
“Well mam, I don’t have it.”
“So you’re asking me to call my Senator and Congressional Rep to talk to them about a bill I don’t know anything about just on your say so?”
Well mam, I’m just trying to make some money and help our environment.”
“Thank you for working for a living and not being on the government dole but it still remains.  You want me to do what you want me to do on your word? No offence, but I don’t know you from Adam’s cat, and the inference you’re making is, because I won’t do what you want me to do then I don’t care about “our” environment? You need to tell whoever hired you to get that bill in front of you so you’re not caught flatfooted.”
“Uh, mam, I’m sorry to have disturbed you. You have a nice evening.”
“Yeah, you too, good-bye.”

That is so not right! Please, do not call me, ask me to do something simply on your word and then get all offended because I call your hand. Hey, I’m happy you’re not sucking the government tit but be prepared…is that too much to ask? Besides, it’s probably some dang liberal organization and we all know how well that goes over with me. I’m so conservative I make Ronald Reagan look like a tree hugger and I care about the environment but not to the exclusion or detriment of human beings. God calls us to be stewards of HIS earth; we’re to worship the Creator, not HIS creation. Don’t go all Al Gore on me, I don’t think much of him; have you seen his nine million dollar Southern California house?  Wonder how big that carbon footprint is?

It sucks pond water, as someone recently told me about something else. I won’t give her credit because she might be a liberal and I don’t want to offend her personally. That should prove I have a limit to being cantankerous, don’t you think?

ROTFLAM which translates, “rolling on the floor laughing at myself”.

Oh lawz, cabin fever might be setting in, ya think?

Blessings ~ the strength to do the work God sets before me ~ sunshine ~ we’re one day closer to spring ~
Share
Pin
Email
« Chhhhaaaattttiiinnnggg with frozen lips
Thank You, God, it’s Friday! »