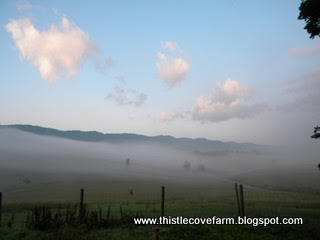 Foggy mornings continue here in the Cove and this morning was exceptionally beautiful. We, meaning the dogs and I, went downstairs a bit before 6 and the madness started! The kitten is still living in Sadie’s dog crate which frustrates Sadie no end, and she, the kitten, has decided she’s had enough of jail. 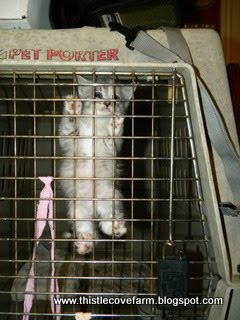 Fabric has been hung so she’ll play and start using her eye/paw coordination. She is let out, several times a day which is good for both she and I. She gets to interact with the family and I have to settle down and be the negotiator should conflict arise. After about thirty-six hours of captivity, she began purring and that was a sign she was beginning to trust; now, she’s totally gentled. Little ones have such short memories at this age, it doesn’t take long to “change their minds”. 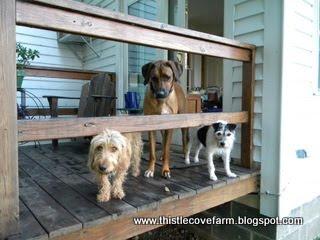 Sam, Sadie and Abigail stayed on the porch as I wandered into the side yard; I wanted to take the first picture you see and they didn’t want to get their paws wet. Heavy fog means heavy dew and these little prima donas move but little except for food.

We needed groceries and that takes up the entire morning. There’s no need to cross the mountain for one errand so I also went to the post office and mailed a package to my nephew serving in Afghanistan. Then Lowe’s beckoned and I bought paint for the farm office bathroom and smaller officer; after, it was finally time to go to the big box grocery store. 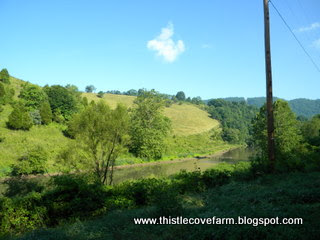 Do you see Bossie? How about the ducks? Okay, do you see the heron? In the following three photographs, you’ll see all three. This photograph is at the bridge at Maiden Springs and the beginning of the Little River where it springs from the underground cave. 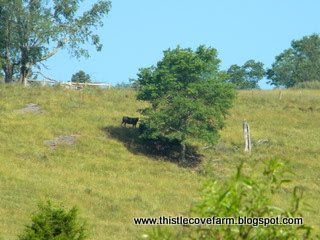 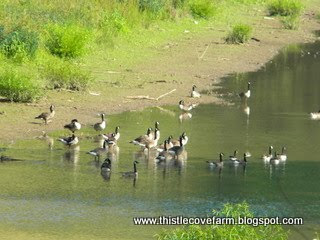 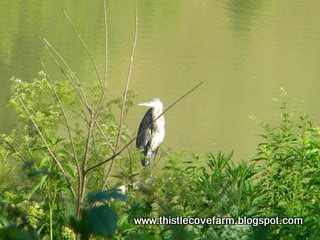 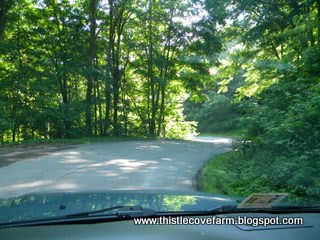 ~ the long and winding road… ~

It’s not quite fifteen miles across the mountains and most of it is like the above…twisting, turning, curvy, U’s and switchbacks. The first ten miles is two-lane road, notice the lack of painted lines, and today I saw a total of eleven vehicles both going and coming…busy day. If I drive the speed limit, it’s about a twenty-five minute drive, unless, of course, there’s a cattle, sheep or horse drive; then, it can take an hour to get across the mountain. 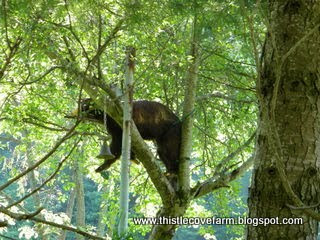 The first little while the homeowner put this stuffed bear up the tree, people just about drove off the mountain. At dusk and dawn it’s especially hard to tell this isn’t a real bear, even now. 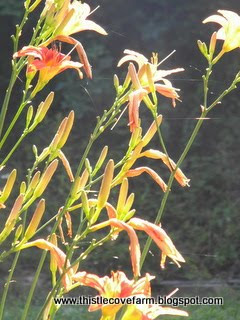 While it’s true there are more spectacular flowers, to my mind, the ditch lily is among the happiest. It grows where other flowers are called weeds and, while its life is short, it is beautifully happy. Surely there’s a life lesson, eh? 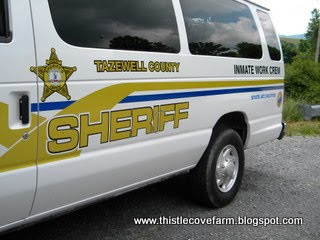 On the way home, I stopped to chat with the folks who were picking up trash. The inmates volunteer to do this as it gets them out of the jail cell, into some fresh air and, sometimes a happy ejit…me…will stop to pass the time of day and say thanks. The Deputy Sheriff was also a volunteer as this was his day off and he was driving the inmates around the valley so they could pick up trash. Thanks, Guys; you’re appreciated! 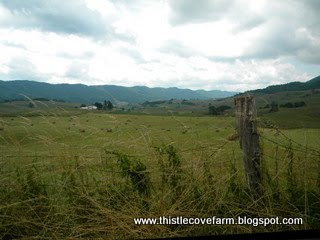 All told, the trip took about three hours which is about normal for grocery shopping. If I go to town, the trip takes a bit longer as there are more errands to run. There’s nothing ever easy or fast once I leave the farm.

Dave called from Bluefield and said Sam’s had raspberries on sale for $1.50 for twelve ounces. He picked up enough to make a couple of turns of jam and that’s on the stove now. Tonight is quilting but don’t think I’ll make it as the jam will take the next couple of hours. That’s okay though, the jam will taste good when the snowballs fly. 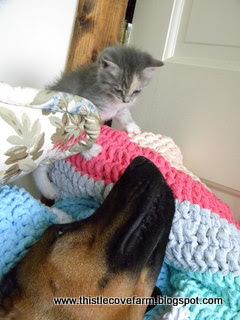 Shaddie, our first Ridgeback, had a very strong mothering instinct. She’d try to steal lambs from their mothers, she’d steal kittens; she simply loved to mother. I’m not sure if Sadie will have as strong a mothering instinct but, for now, it’s enough they explore each other without injury.

Peace at Thistle Cove Farm…and all will be well.