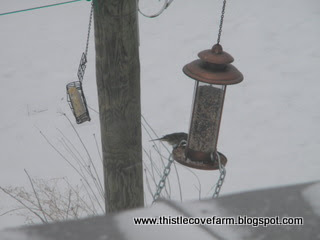 Housekeeping note – I try to always respond, privately, to each note but sometimes it takes me a while to comment on the blog. If your settings are set to “no reply”, that’s why you’re not receiving a quick response.

Re. my last entry and questions…thank you to those who had answers and I’ve figured out the what and how and wherefore’s. If any are interested, I’ll do a separate entry on bloggie techie stuff. I learn how to do a few simple things and am now too big for my britches! At least my hat still fits, I’ve sweatpants galore. -grin-

Dave and I moved to this little farm, he in May 1995 and I in June 1995. He set up a bed downstairs while, each night, I would trudge upstairs, carrying a lighted candle, to my bed. Mom was so concerned the neighbors would think we were “shacking up” and, thus be shunned, but I was so concerned with packing up two households and moving them across the state plus working with a realtor to sell those same two houses, that what the neighbors thought was way on the back burner. Besides, we weren’t “shacking up” and the Almighty was fully aware of our circumstances so Mom’s concern, while born of love, seemed a mite misplaced.

I kept a journal of that first year and sent out hard copies to various relatives and friends. Mom and Daddy’s preacher, Jerome H., called them the Thistle Cove Farm Epistles and was always urging “send the next chapter”. It’s hard to believe, but I know exactly where those Epistles are located and will drag them out and start posting those first months of farm life. Looking back on what we accomplished, I find I’m amazed at how we lived and what we went through.

January 1996 was the worst winter storm southwest Virginia had seen in a decade or more. At least, that’s what we’re told. It was very snowy, high winds, low wind chills and snow drifts to my waist. At that time, we were living in three rooms and heated with a coal stove and a wood stove. We had a couple of lights, extension cords strung hither and yon and a sense of adventure that carried us through. That and the Good Lord above of course. We didn’t have walls but were the proud owners of R-19 insulation, hand stapled in between the studs and 6 mm plastic hand stapled atop the insulation. The plastic kept the insulation from being blown out of the walls when the winds picked up. It’s safe to say the winds pick up a site more than they stayed calm, then and now. Maria was at her absolute best that year and I don’t mean that sad, skinny girl who’s trying to find herself.

The photo of the bird feeder was taken from the upstairs bathroom. The chains are hung, either side, to help keep the feeder from swaying, a lot, and spilling the seed. Both chains weigh about a pound or pound a half each so you can see how hard the wind is blowing. 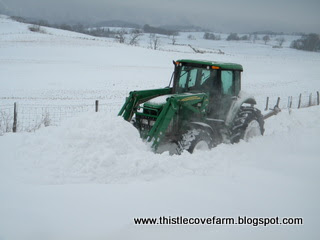 ~ neighbor John, plowing a path ~
When I headed to the barn this morning, I saw our neighbor, John, coming down Cove Road. I walked to our front fence to see how deep the drifts were and found him plowing a path. Prior to sometime in the late 1960’s, Cove Road was simply Rt. 608 and a dirt road. Even though it’s now paved, it’s never had a coat of paint splashed down the middle or on either side. We simply don’t have that much traffic, except in hunting season, of course. Thankfully, hunting season is only a few months a year so traffic is, generally, sparse the rest of the year. 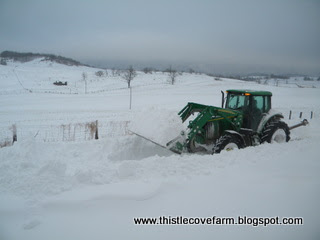 The snow drifts are, fairly, deep; too deep for us to break a path from our driveway to the road so we’re here for a while, probably a couple of days, but that’s okay. We’ve food a-plenty, milk, water and I made five quarts of chicken stock yesterday. Some will be frozen while some will be made into chicken noodle soup, vegetable soup and, along with some home made bread, will keep us in good stead for a few meals. 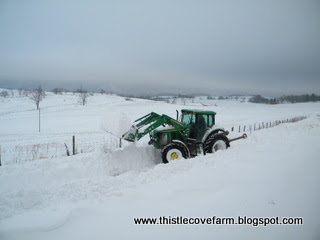 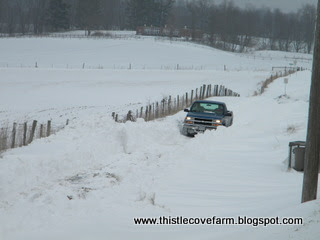 ~ hope springs eternal ~
This truck driver waited a while, thinking he could walk in John’s steps and get from there to somewhere else. I’m not sure who this is nor where he’s going but there are only two occupied houses at the end of our road. Even so, if he doesn’t have four-wheel drive, he’ll still not make it all the way; the road is simply too covered in snow and if he slips, even a foot, he’ll end up like this truck: 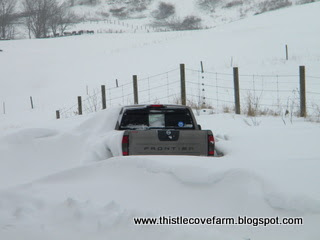 ~ stuck ~
Last night, around 7 or 8, Dave and I thought we heard a vehicle but when we looked out every side of the house, didn’t see anything. This truck was in a blind spot of Cove Road and we could never see him. We’re not sure what the driver did but will hear, eventually. As you’re looking through his back window, through to the wind shield, you see just how deep the drift at that point. 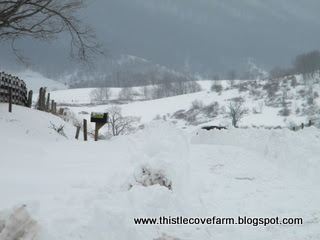 ~ after John plowed the road ~
Carefully, John plowed a path beside the truck and then continued on to feed his cattle. At some point, he picked up the driver…perhaps at the house further down the road…and came back to clear another path for the truck to escape. 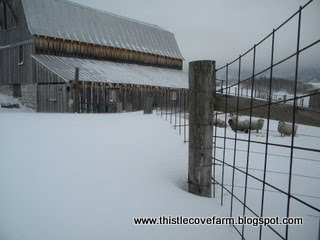 ~ snow drifts on the farm ~
On my way to the barn, I was plowing through some waist high snow drifts. These are eight foot fence posts and the next fence post beyond the one you see in the front is showing about a foot. For once, I followed the dogs and let them break a path for me. 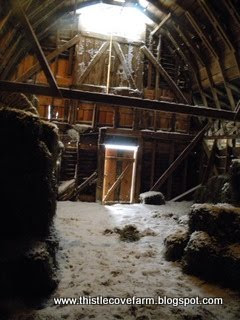 The barn loft got its share of drift but it won’t negate the nutritional value of the hay. I fed all the animals some square bales this morning; it’s a tad better quality than the round hay and I figure they need the calories. This day isn’t going to get much warmer although last night was supposed to be the coldest of the winter season thus far. 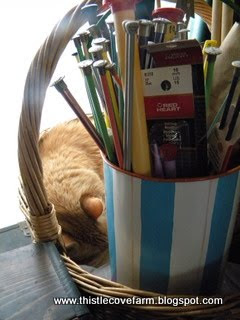 The lesson here? Go thou and do likewise, especially in this cold, snowy season.

Blessings ~ safety ~ good neighbors ~ seed for the feeder ~ soup ~ home made bread ~ you, because encouragement is one of the freest, sweetest gifts and you’ve shared in abundance ~