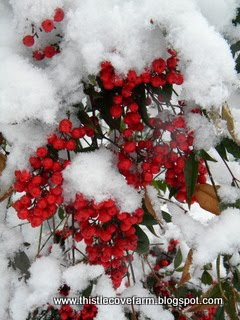 Please, some of you savvy bloggers out there, I’ve a question or three but I’m afraid they aren’t posed very well. I’m not a high tech blogger and am in need of much help -smile-.

2. I’d like to match up my Followers with my Cozy Reads; make them one and the same, for the most part. Oh, some of the folks I like to read don’t have the Follower button on their blogs but I enjoy knowing when they have updated their blog. What’s the simplest way to match up Followers and Cozy Reads?

3. Is there a place to find out those whom I follow? I’ve lost track if ever I was on track to start!

4. Out of sheer curiosity, why do you blog?

Lately, I’ve been reading about blogs, women who blog, women who write about blogging, blog conferences, etc. I suppose BlogHer is one of the oldest, having been around for a number of years now. I joined BlogHer a while back but, truth be told, I’m not at all sure what it’s all about and, more often than not, forget to keep up. Now that I think about it, I’ve joined a number of “communities” and am still clueless. I probably shouldn’t admit that, eh? But truthfully, don’t you find it a bit, or more than a bit, confusing? There’s talk of Twitter, ShoutLife, Linkedin, Facebook and, probably, dozens more; I haven’t even mentioned the ning social networks! I’m overwhelmed and feel the need to focus but how?! And on what?!

Blissdom 10 conference just ended in Nashville and there were hundreds, perhaps thousands, of women who attended. The workshops looked amazing, quite interesting and, more than likely, very worthwhile both in terms of participation and learning.

Tara Frey, Typing Out Loud blog, has released a new book called Blogging for Bliss and I’m finding it an intriguing read. The subtitle, “Crafting Your Own Online Journal – A Guide For Crafters, Artists and Creatives Of All Kinds” grabbed me. It’s chockablock full of useful information, great photographs and wonderful blurbs and links to all sorts of blogs. I’m finding it enjoyable and am gleaning all sorts of information both regarding blogs, artists, arts, crafters, crafts and creative types. Perhaps she has the answers to my first questions and I’ve not read to that point…time will tell.

There is one thing she’s written that makes my head tilt sideways and my mind go, “HUH!?” She writes about being authentic and genuine, paraphrasing, then goes on to write on page fifteen, “Keep in mind that creative blog readers come to your journal to escape, so it can be disappointing or uncomfortable for them when they see political rants, religious overtones, or foul language. If you want that type of blog, you may be in the wrong neighborhood.”

She has a point but how can one…I…separate myself from God, my Creator? Not that I want to but my point is, on the best day I ever lived, I never had a creative thought, word, deed or action. It comes from God, all of it. ALL. If you don’t believe in God and I visit your blog, I’m not offended by your lack of belief and am still able to glean information and enjoy my visit. But how can I be authentic and genuine and never write about my faith? How is it possible for me to blog about my bliss yet never mention my Creator? I maintain it’s not possible nor do I want to try. Truly, it’s not my intent to dismay or make you uncomfortable but better you than God, eh? -smile- As to question number four, I’m still working on my answer. 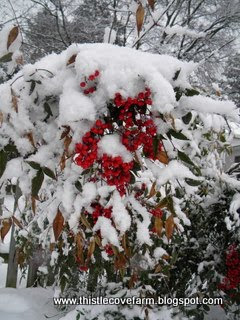 Dave and I have just returned from Richmond, VA where he had a business meeting. While he was in his meetings, I took the opportunity to shop at some thrift stores. Pickings were slim but I still managed to find a few treasures, some of which I’ll, hopefully, show you tomorrow, vintage Thursday. 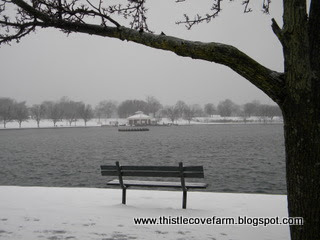 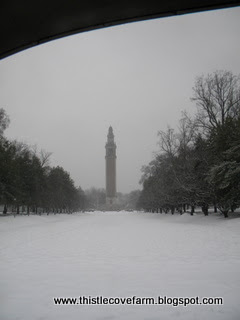 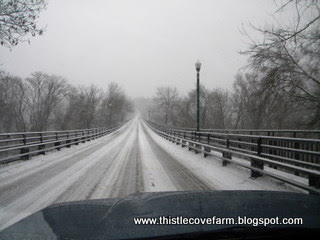 ~ Boulevard Bridge ~
Have you ever listened to old folks say, “I remember…”? I just know you have; heck, some of you are those “old folks”. I certainly am an oldster and well remember when the Boulevard Bridge was called “Nickle Bridge” because…yep, it costs just a nickle to drive across. Now you have to throw seven of those same nickles into the catch-all just to cross the bridge. Thirty-five cents to cross the nickle bridge; why, it just ain’t right. It ain’t right a-tall! the old gal is mumbling to herself…again. -grin-

On Saturday I was able to get to Amelia County to visit my sister, her family and Mother and Daddy came as well and I took a few side roads to take the above photos. There weren’t many cars on the roads, making for easier driving and I tended to drive about five miles below speed limit so other cars could zoom around me. I’m more of a “get there safely” kinda gal as opposed to the “get there fast” kinda gal. You know the kind…built for comfort and not for speed kinda gal. 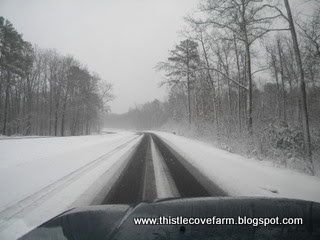 Dave and I came home late Sunday night, long story there I won’t go into but suffice it to say the journey is supposed to take half of the plus eight hours it took. There’s another storm approaching so we went to the grocery while we were able and today woke to lots of snow, huge drifts, high winds and this: 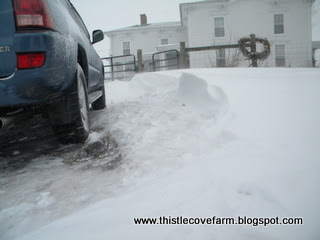 ~ Feb 2010 snow storm ~
Snow drifts are above my knees but the good news is, it doesn’t hurt when I fall. I fall a lot in deep snow because it’s just so dang difficult to motivate from one step to the next. Or something like that. My bones ache, my joints seem frozen in place and my fingers are numb. I’m building up an impressive set of face wrinkles from squinting in the snow blindness and, now, completely understand why Aunt Bonnie and Uncle Ray didn’t bathe but about three times a week. When you live in an old farmhouse, it’s downright painful to get totally nekkid and that’s the way you’ve got to be to get washed off really well in the shower. As much as I LOVE getting in the tub, my body just whimpers at the thought and the bedroom is hovering at the not quite balmy temperature of 49 above zero F. That’s sure to change though; winds are picking up and the wind chills are robbing my dear little bedroom of its measly 49 degrees.
O Lordy. Is it okay for a grown woman to cry like a puppy? 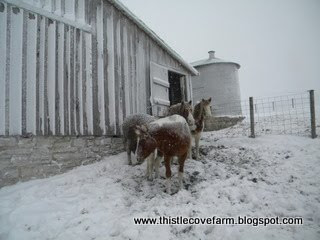 ~ Dani Girl, Meri Go Lightly, Dandy Man ~
There are four horses in this lot and pasture but you only see three. Why, you may very well ask? It’s because Peaches is a royal witch and she stands just inside the barn door, preventing the others from entering. Sometimes, but if and when she feels like it, she’ll let in Dandy Man, her son, but for reasons known only to her and she’s not telling. It riles me but I figure it’s just something they all have to work out amongst themselves. Just like humans…why can’t they share? 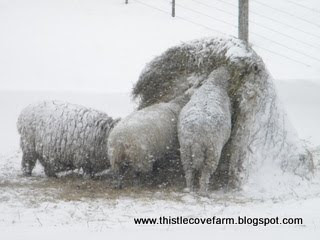 ~ sheep feeding at round bale ~
The sheep have a free choice round hay bale and feed as their stomachs dictate. From the looks of it, I’ll have to put out another round bale by Friday but if the storm keeps up, will set out a bale tomorrow. 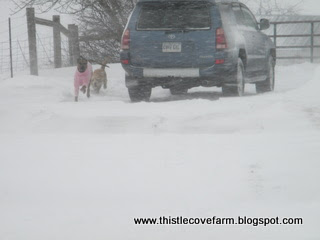 ~ Sadie and Sam, playing chase ~
Sadie and Sam love playing chase in the snow. Abigail…not so much but she has old bones and it takes more energy for her than the puppies. The puppies haven’t reached their first birthday and Abbie has seen 14 years on this farm and was an adult when we found her. She’s entitled to her comforts. 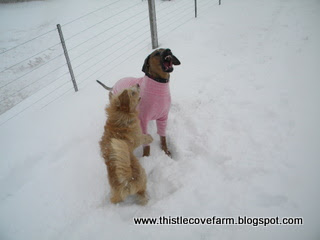 ~Chewbacca, Sadie style ~
We run a relaxed household here at Thistle Cove Farm and it’s a good thing. In early evenings, the puppies tend to go on a tear and Dave and I step aside and laugh like loons as they play chase in the house. We’ll open up the doors so the puppies have access to front and back stairs and watch as they chase each other through the house, across the furniture, playing chase and tug of war with an old rope. If laughter is good medicine, we’ve a daily dose. I suppose there are those who think us insane for not only allowing the dogs to play chase but allowing them in the house and GASP! in the bed with us. But I shrug and know we’ll not live forever in this veil of tears and the more happiness I can gather, the happier I’ll be. 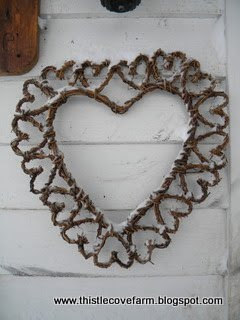