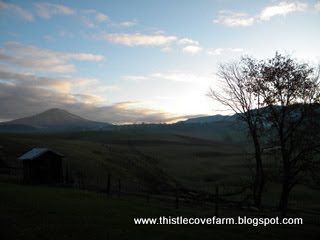 ~ the place where morning gathers at Thistle Cove Farm ~

Are you familiar with Rich Mullins? He was a extremely gifted Christian song writer and musician who passed away in 1997 but left behind a legacy of music and words that are haunting in their beauty and are being sung still today. He played several instruments and was best known for his skill on the hammer dulcimer; you’ve probably sung his songs in worship services. Sing your Praise to the Lord and Awesome God are two of his songs. His last major work, Canticle of the Plains, was loosely based on the life of St. Francis of Assisi.

In 1993, he founded the Ragamuffin Band, taking the name from Brennan Manning‘s book, The Ragamuffin Gospel, written in 1990 where Manning defined ragamuffins as “the burdened, the wobbly and weak-kneed, the inconsistent, unsteady disciples. the smart people who know they are stupid. the honest disciples who admit they are scalawags”.

ouch. um. That would be me. Trying hard but, mostly, trying. A practicing Christian because I can’t seem to get it right. In fairness though, I’m not that inconsistent because there’s one thing I know and that is I’m a child of the Almighty God; it’s what keeps me on the straight and narrow, heading forward with eyes upon the Christ prize in heaven. I know there are folks who don’t embrace Christianity, nor indeed, any faith. I’m good with that; it’s between them and their God but when ya know that ya know that ya know…it’s a really great thing!

Back to Rich…he wrote a song…and I’m ashamed to say I can’t remember the words…but he’s playing the hammer dulcimer and the song is s-w-e-e-p-i-n-g in its grandeur. He starts with the words, “in the place where morning gathers…” and goes on to talk about “those wild Dakota hills”, “there’s fury in a pheasant’s wings…”. There are only a few songs that, when driving, I’ll chance blowing out the speakers; this is one of them. I’ll throw open the moon roof and, I’m telling you…I can feel God. Right there, just above my moon roof, sitting on His throne, tapping His toe, swaying with the music and…this is the part that stings, just a tad…smiling because He’s got Rich there in front of Him, singing to his own CD.

Way cool. When I saw sunrise this morning, I thought of Rich playing his hammer dulcimer, singing his heart out and the sheer joy he derived from what he did, when he nailed “it” and knew it. The sheer joy I feel when I listen to his music or the music of The Ragamuffin Band or read the Ragamuffin Gospels and know we’re all in this thing called ‘life’ together; we’re all struggling, we’re all pressing onward toward a goal of our own choosing. 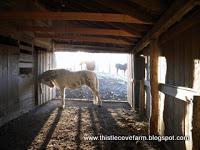 At the barn, Dandy, scratches his head against the door handle before coming over to say good morning. I love the way the light streams in, casting long shadows against the dirt floor and the old timbers. 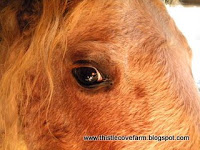 Peaches, ruler of the pasture…or at least her pasture and her three “youngins”.
I’ve separated the eight horses into four and four so the two geldings are apart. HayJ, the big’un was beating up on Dandy which wasn’t a good thing. Not a-tall. 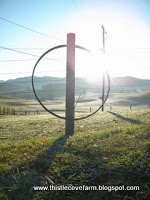 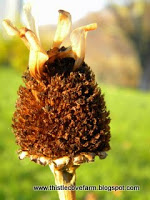 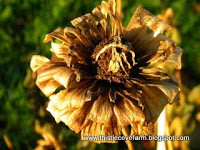 The gardens have played out but there’s still beauty to be found in the leftover flower heads. 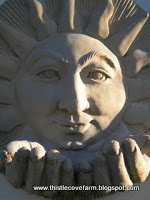 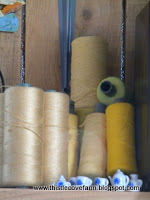 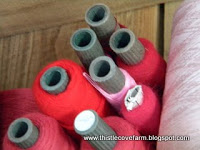 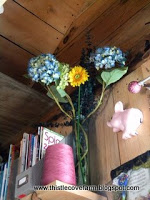 There’s no place for the eye to rest without seeing something beautiful and meaningful. Some might think it crowded, cluttered and too busy but, for me, it’s restful, peaceful, exciting and invigorating all at once. It’s a great place to simply “be”. 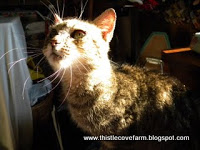 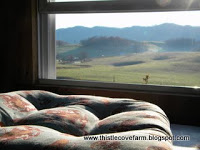 Boscoe has become my studio cat. Without going into a long story, after we came home from the beach, I found Bos staying at the barn but he’s not a barn cat. He’s a back porch cat and when I brought him back to the house, he was in pitiful shape. Something has been pounding on poor Bos with regularity and with power. Bos is not a fighter, he’s a lover and has always been a cuddlekins. We weren’t sure about bringing him into the house…too many kittens and puppies and things would go wilder than usual, so, last night, he was put into the studio with litter box, food and water. The studio has heat and he’s been, safely, ensconsed there ever since. He’s happy, has been a perfect gentlecat and shows no signs of wanting to leave so he doesn’t have to leave; he’ll stay until he decides he wants to mosey back outside. In the meantime, he has several perches, this one with a stunning view.


—not sure what’s going on with the italics, can’t return the font to plain…sorry–


Are you familiar with Stampington and Co.? How about Somerset Studios? The later is published by the former with a slew of terrific, inspiring and inspired magazines including Artful Blogging which is a collection of “visually inspiring on-line journals”. In other words, eye candy. Zowie eye candy. A place where like minded folks are gathered to be showcased, to strut their stuff and, perhaps most importantly, to show the rest of us we’re not alone in our quest to make things with our hands, our hearts, our minds. To bring beauty, coziness and comfort into our worlds and our homes. To celebrate our a-likeness, to accept our differences, to gather ideas, to be stimulated and to stimulate, to share. I believe it’s a quarterly publication; when a new issue comes out, it’s my constant companion and goes where I go. Okay, not in the shower but, certainly, in the bath and most definitely to bed.


Other of their magazines are HandCrafted and Life Images but I’ve not found either one in the bookstores so I’m going to have to order them both. Seriously. My mental health demands it.


Blessings ~ being able to see the place where morning gathers ~ the barn ~ sunrise ~ Boscoe ~ inspiration before me, in print and on the web ~ Rich Mullins’ music ~ ragamuffins, loved by God ~