Hallelujah! Daylight savings time is behind us for a few brief months. It’s not that I mind it during the spring and summer but for whatever strange reason, by the time we slouch toward October, my body rhythms are totally skewed. Yesterday, I woke up and felt approaching normal; this morning I work up and felt like I was reborn and does it ever feel great! I skipped exercise class, opting to give the house more than a lick and a promise and, while I didn’t finish, the start was enough to make me happy. 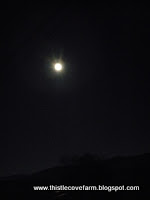 We call the November full moon a Full Beaver Moon because there was still time to set beaver traps before the swamps froze. Daddy has set his share of traps…and please, do not leave me testy little messages about cruelty to animals, etc. That was a different time and a different place and there were, and are, Appalachian folks who put bread on the table with what their trap line provided..meaning they trapped the beaver, fox and other small animals and sold their pelts. Not to mention ate the meat. I still know folks who hunt for meat and between what they kill and what others give them, they’ll eat half dozen deer a year. If you’ve not noticed, times are hard, especially for the working poor and, in total contrast to what hear from the media, unemployment is inching, countrywide, to the ten percent mark and beyond. Frankly, I have no problem with people killing deer all year long when it’s for the table; it’s the “sport hunter” that tend to raise my hackles. 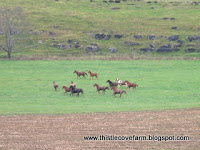 ~ horse herd, other end of the Cove ~
There are three hard surfaced roads leading out of the Cove as well as one dirt road that also crosses a mountain. This dirt road is the only primary road, Route 91, in the Commonwealth of Virginia and dang near impassable in the snowy winter months. A vehicle has to have four-wheel drive in order to, safely, traverse the mountain and there are several switchbacks, S and U turns. It’s terrifically exciting driving back over that dirt road, across that mountain especially when it’s pitch black with no moon. One’s mind can go a little crazy thinking dire thoughts, remembering there’s no cell phone service and the only way to get help, should help be necessary, is to walk in either direction. At the top of the mountain, you’ll have to walk a good few miles in either direction and then chance no one being home when you get to the bottom. Needless to say, I don’t travel that mountain very often in the dark.
There’s another road leading out of the Cove; it’s through Smiley Ratliff’s property at the head of the Cove and you have to have four-wheel drive, engaged, to cross that mountain. It’s not even a dirt road, rather it’s a grass path that animals have made and, sometimes, humans have used. It’s never even crossed my mind to try that road. 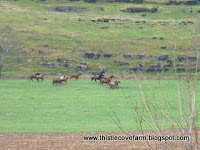 ~ going toward Paintlick ~
At the far end of the Cove, there’s Paintlick; it’s where the American Indians painted on  stone outcroppings and those paintings may still be seen; click on “Paintlick” and you’ll be at the start of a slide show of those interesting paintings. They are going the way of all flesh, that is to say, fading but are distinct enough one can still allow the imagination to take flight. Across the road from our house, when the field has been cut and in winter, there’s a definite dark circular impression in the earth and this is where an Indian village was once established. 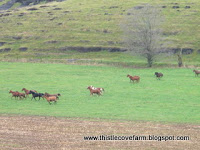 ~ the horses are in a huge field, a few hundred acres, running back and forth… ~ 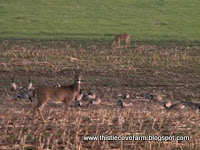 ~ Deer, grazing amongst the geese ~

At one end of the field, corn has been cut and all sorts of wildlife graze, including white tailed deer and Canada geese. I counted half dozen deer but the geese were too numerous to count. 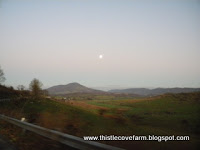 ~ Full moon hanging over the Cove and Morris Knob ~

I feel the need to nest, to prepare for those cold, dark, winter months where one hunkers down and tends to home and heart. I made apple butter from our Granny Smith apple tree and it’s delicious! I’ll hot water bath it tomorrow and, hopefully, there’ll be a tad left over to slather on some cat head biscuits. I think I’ve got some home churned butter in the freezer so sounds like there’s a feast in the making.

As to knitting, I’ve been turning out wash and dish cloths that will go for Christmas gifts. I still have a ton of stuff to mail folks…seems there’s more work than time to accomplish it. I want to spend some time wandering around Sew, Mama, Sew! Handmade Holidays III; I “found” a fabulous fruit pie that’s made in half pint wide mouth jars and want to make some of those as well and am sure to include my peanut butter and chocolate fudge, shortbread, lace cookies and a bunch of other goodies. The Christmas countdown as begun, the gauntlet has been thrown down and I’m off to a, reasonable, start.