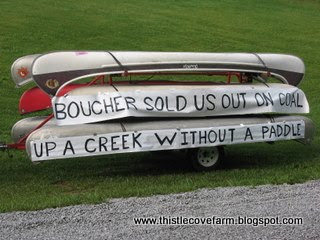 RE: Cap and Trade – Don L. Blankenship, Chairman and CEO of Massey Energy, fourth largest coal company in the USA notes, “In Spain, an economics professor calculates that green job schemes have destroyed more than 110,000 jobs in that country, of 2.2 jobs destroyed for every one created. The CEO of the world’s largest renewable energy company, Eon, is warming the EU that further cuts to CO2 emissions will only raise the cost of energy, putting the region at a competitive disadvantage and driving production overseas.”

God knows what the figures are in the USA but if you’re a small business owner, between Cap and Trade and ObamaCare – Bend Over, Please.

So, you don’t think a coal company has anything to do with you? Au contraire, Dear Voter! If you’ve flipped on a light switch, turned on your computer, read a newspaper, magazine or book, driven your vehicle or ridden public transportation…in other words, if you’re a member of the 21st century, living in the USofA, indeed most of the civilized world, coal affects you Every Single Day and you should thank a coal miner. If you’ve eaten today, thank a farmer.

RE: National Health Care Socialization Plan – Dick Morris and Eileen McGann are two writers appearing on The Hill, a website aimed at keeping up with the “Inner Circle” madness that has spilled over into our everyday lives. Will Rogers said, paraphrased, of President Calvin Coolidge, “He didn’t do nothing much but nothing much was what we wanted done.” We, the plebes that pay taxes and vote those folks into office, used to could say the same about our “representatives”. No longer.

“The American Medical Association (AMA) was facing a 21 percent cut in physicians’ reimbursements under the current law. Obama promised to kill the cut if they backed his bill.”

“The AARP got a financial windfall in return for its support of the healthcare bill. Over the past decade, the AARPhas morphed from an advocacy group to an insurance company (through its subsidiary company).” — “Obama solved their [AARP] problem. He eliminates subsidies for Medicare Advantage. The elderly will have to pay more for coverage under Medigap, but the AARP — which supposedly represents them — will make more money.”

You don’t recognize Medigap? Gee, me neither. Wonder who owns them?

THANKS AARP…not. When it’s time to renew my membership, guess what? It’s not happening! Oh, and by the way, you may stop sending all those requests to support a “national health care plan” ’cause that’s not happening either. As a matter of fact, I’ve already sent my Senators a letter asking them to vote NO. As soon as I finish with this blog entry, I’m going to telephone them, just in case they’ve forgotten my request to vote NO.

Instead, I’ve telephoned American Seniors, an organization that advertises itself as a “conservative alternative to AARP”. Stuart Barton, President of American Seniors, has written ObamaCare No, Targeted Reforms, Yes and, in part, states,“The American Seniors Association, which represents hundreds of thousands of members nationwide, has several major concerns. First, any government-run plan is bound to limit patient-doctor choice. Second, the House bill includes an employer mandate that would kill jobs and lower wages. Indeed, the current House legislation attacks baby boomers and seniors — in fact, every American– by underwriting the $1.5 trillion healthcare price tag with new taxes and by cutting $500 billion out of Medicare over the next 10 years.”

Mr. Barton quotes Camille Paglia, a liberal Democrat writer for Salon, in which she “eviscerates Obamacare perhaps more shrilly than any conservative pundit to date. Consider:


“You can keep your doctor; you can keep your insurance, if you’re happy with it, Obama keeps assuring us in soothing, lullaby tones. Oh, really? And what if my doctor is not the one appointed by the new government medical boards for ruling on my access to tests and specialists? And what if my insurance company goes belly up because of its government-bankrolled competitor? Face it: virtually all nationalized health systems, neither nourished nor updated by profit-driven private investment, eventually leads to rationing.


“Paglia’s specific criticism of Obama, which ASA shares, is withering. “Frankly,” she writes, “the president gives little sense of direct knowledge of medical protocols; it’s as if his views are a tissue to hearsay and scatter-shot worst-case scenarios.”

YEOUCH! Can you hear us now?

And, while I’m on a rant… I don’t want to forget the Golden Boy of Environmental Causes…most especially those that will make him a Billionaire…he passed the Multi-Millionaire status long, long ago: Al Gore. Smart boy that he is, he has positioned himself to receive Billion$$$$$ in government fund$$$$$ when, yet more, global warming legislation is passed.

Do I believe in global warming? I’m not sure but I do know Michael Crighton didn’t believe in it; he researched for three years and then wrote State of Fear as his response to what he believed was a hoax. In an ABC interview, he said,”I’m saying that environmental organizations are formenting false fears inorder to promote agendas and raise money.”

OH NO MIKEY, say it ain’t so! Surely not!

Weather keeping has only been done for about the last one hundred years. Of course there are fluxuations in the weather, always have been, always will be but Global Warming…? Ummmm, who knows Beyond A Shadow of A Doubt? The answer is: no one. Not Al, not O, not Teddy, not you, not me. No One. That doesn’t mean I don’t turn off the lights when I leave a room but that’s, primarily to save money and the side benefit is, I don’t use energy…er…money more than necessary.

In closing…here’s a truth No One can get around: You Cannot Take It With You. Period. Nothing goes – Nada. Zilch. Zero. All that lovely lolly you told uncountable lies for and spent years amassing and, in some cases, sold your soul to obtain – it Stays Behind as does whatever name you’ve made for yourself. After you’re gone, it becomes Someone’s Else’s Money and what’s left behind is the old maxim: Liars figure and figures lie. Oh, and global warming? Well, that’s going to pale in comparison to the Hades hot it will be down below.