If you stop and think about it, every birthday is a milestone and I’d rather live my days simply, in order to travel large, than vice versa. My parents instilled in me a yen to travel. Every year Dad would get two weeks vacation, pile the family into the truck camper and we’d see the USA. One memorable trip was out West where we saw Wall Drug Store, Badlands, Mount Rushmore and still spent 3 or 4 nights at Yellowstone.  (As an aside, Mom and Dad just sold that camper to a young man with a wife and two children who’ve reported they’ve already made great memories. Well done!) As to Dad’s 1969 Chevrolet truck… 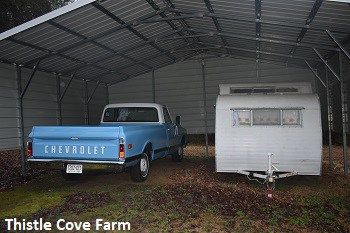 it rests beside my 1967 Scotty canned ham camper and both will, eventually, be put into the local car show.

For those of you who’ve seen my photos on Facebook you know I’m still working on packing light. Dave was far, far better at it than I…then again, he expected me to carry a lot of stuff for us along with my stuff. I was happy to oblige and credit Hot Hands with saving him from a hospital visit during a Sahara Desert camping trip with Tauregs and Bedouins but that’s another travelogue.

If you haven’t figured out by now…this post will have a lot of tidbit information including personal observations, choices, reasons, etc. One of my favorite things to do is cruise the travel groups and pick up other people’s suggestions, tips, etc. Trip Adviser is the absolute best I’ve found; people are generous with their information although they sometimes get a bit sticky when their advice isn’t taken. BTW, no, I’m not receiving any compensation from any of my links…just passing along things I’ve found useful or I use.

One more thing…a friend asked, “Did someone plan your trip for you? Did you use a travel agent?” Well, no and yes. I planned my trip because in 2017 I spent a day in Edinburgh and knew I wanted to return. I also knew I wanted to see as much of Scotland as possible but once I decided what I wanted to do, where I wanted to go, where I wanted to stay, I used Sunshine Journey to obtain reservations for hotels and plane. Yes, I traveled solo albeit to a country where we share, somewhat, the same language. At least, until they started speaking Gaelic and then I would simply sit (or stand) and let the language wash over me in a poetic verbal cascade.

Some few weeks ago, at a thrift store, I found A History of Scotland by Neil Oliver. (Seriously, is there anyone on the planet who does broody as well as the Scots? I think not.) If you enjoy history, this book is enthralling. I’ve learned, and am learning, so much not only about Scotland but about the USA as well and highly recommend your reading.

I manage to go with a 21″ Pacsafe suitcase and a under seat bag using a small Pacsafe wallet to hold passport, identification and money. (Coming home is a vastly different tale which, eventually, you’ll find out.) If you’re unfamiliar with Pacsafe, they have “un-cutable” suit cases, camera cases, wallets, purses, camera straps, etc. As a solo traveler, not worrying about having my wallet or purse cut open is worth the extra money.

There was no direct Edinburgh flight but my only layover was the Philadelphia, PA airport, filled with interesting art.

looks like this seat has been sprung from many a weary bum /haha/.

I’ve got to hand it to PHL, they do an admirable job of making their airport interesting.  When going eastbound, I always fly the red eye…it’s a lot quieter because once food has been served, people settle down for the night flight and most folks sleep. A few read or watch movies but most sleep, including children and babies. When heading home, I tend to fly mid-day, a much noisier flight, in order to arrive in time to drive home in daylight.

Arriving at the Edinburgh Airport “Where Scotland Meets the World” and going through customs is much the same as anywhere else. My response to his question, “Why are you in Edinburgh?” I said, “To spend money in celebration of my 66th birthday.”  He laughed and said, “Happy Birthday; spend a lot while you’re here” and I told him I’d do my best. There are those who say, “Don’t try and jolly the airport personnel” but I’ve always found a kind word along with a smile or laugh goes a long way. If they’re having a bad day, I find out quick enough and quieten myself.

There were several options to get to center centre from the Airport…taxi, bus or tram which I chose and it was a marvelous choice. The bus might have been a good choice as well but certainly wouldn’t have taken me through the countryside.

My first glimpse of a stone bridge.

For folks with no garden, allotments are provided. (The Guardian has many great articles on allotments, well worth your read.) Basically, an allotment is a patch of earth where one may grow a garden. Near me, I know of housing developments who have adopted the custom.

As we near center centre, housing developments, such as these duplexes, come into view. It’s interesting the back garden (yard) access is from the house side and not the rear.

Beautiful stone buildings with lovely ironwork; even though I’m a country hen, I still find these old buildings breath taking in their beauty. How long have they been standing? What goes on in them now? I think it would take a lifetime to suss out the mystery of Scotland.

Anthony Bourdain said, “Travel isn’t always pretty. It isn’t always comfortable, Sometimes it hurts, it even breaks your heart. But that’s okay. The journey changes you; it should change you. It leaves marks on your memory, on your consciousness, on your heart, and on your body. You take something with you. Hopefully, you leave something good behind.”

Yes, this trip was daunting and exciting and a bit frightening and strenuous and YES! I’m planning my next trip. Getting out of my comfort zone is a Very Good Thing. It causes me to take deep breaths, live with eyes wide open and when Marti said to me, “I envy you. You’re not afraid of anything” I said, “But I am afraid of one thing especially. I’m afraid if I ever say “no” to God, He’ll stop giving me opportunities.” Hans Christian Andersen said, “To travel is to live” and I want to live more fully, more alive, more. But now I hear thunder and need to close the computer; there’s more, much more, to the Edinburgh trip. I hope you’ll share my memories and photos.