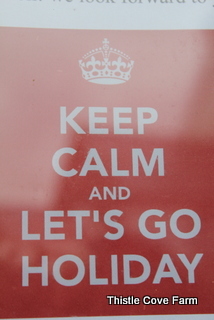 Anita, at Castles Crowns and Cottages, is hosting a virtual travel party entitled: 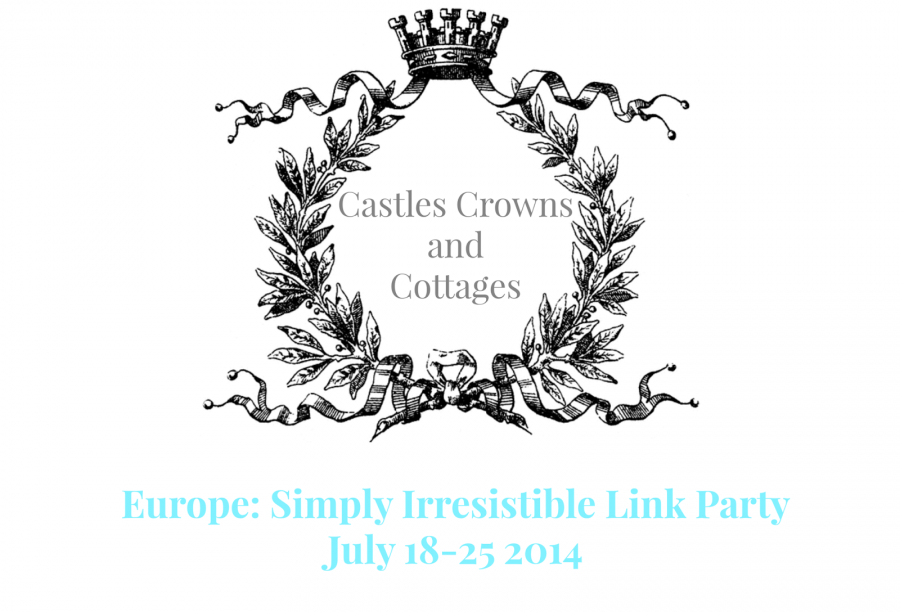 (The blue print says “Europe: Simply Irresistible Link Party July 18-25, 2014”)
It’s a virtual party and travelogues may be imaginary or places one has visited. Last November I went to Ireland and, in several posts, you’ll be introduced to my thoughts and photos. The series will end with an Irish gift giveaway…are you ready?
These two lads evidently lost their heads over me…LAM! (laughing at myself) 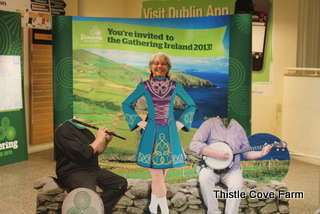 The
November day my plane touched down in the Republic of Ireland it was raining.

Of
course it was raining; it’s Ireland, therefore it’s raining.
Fortunately, living on a farm, I’m used to weather and was prepared
for chilly, rainy weather so wandering around the terminal, looking
for transportation meant a minor inconvenience and not a tragedy. I
opted to take the bus as opposed to a taxi; buses meant rubbing
elbows with locals and that meant, possibly, good tips and advice.
The older woman who sat next to me accepted, with a smile, my apology
for my barely controlled suitcase as it skittered hither and
thither. She asked if I was from the States and proceeded to tell me
what she liked best about her home. For a city woman, she dressed
country in sensible walking shoes, tweeds, a raincoat and carrying an
umbrella; my kind of woman and we both enjoyed our short visit. 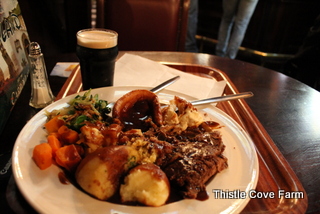 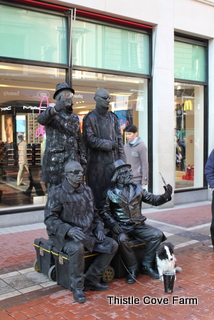 ~ Dublin statues, all alive, save dog ~

Dublin
is a cozy city and a walkable one; I was never far from anywhere,
especially as I’d opted to stay in a, more or less, central location.
Not in the Temple Bar area because it’s rowdy, busy, filled with neon
lights, noise, pubs where drinkers spilled into the streets and more
energy than I wanted to either expend or be around. I prefer cities
in manageable bites; small portions where one partakes of the culture
and the sentiment and where history can be smelled, tasted, touched
and felt without being burdened by a crush of humanity. 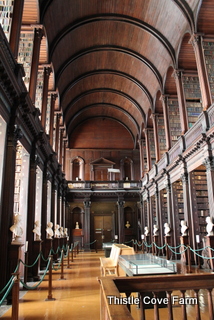 At Trinity College, The Long Room was a must see. “Under the 1801 Copyright Act Trinity College was designated as an Irish legal deposit library entitled to a copy of every book published on the two islands. ” The Long Room measures 63.7 metres long, 12.2 metres wide and 14.2 metres high and, in a word, is amazing! 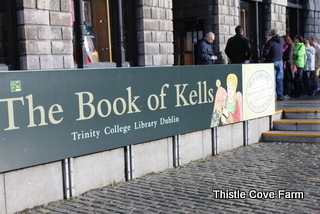 At Trinity College, the Book of Kells was also a stop. I
always visit as many churches, cathedrals and see as many important
works as I can and have been blessed to stand at the alters of the
Gutenberg Bible and the Magna Carta in London. To see the Book of Kells was as inspiring and tears were quietly shed; if you’d like to see digital copies, click here. 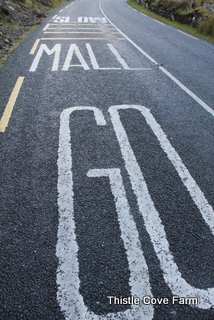 A
couple of days in Dublin and I was ready to hit the road with Vagabond Tours, Discover Ireland tour. The first driver was having a bad day week life while the second driver should be on the “promote Ireland” poster. Day and night, chalk and cheese; the difference between them was unbelievable but both were very safe drivers and Vagabond Tours is recommended with this caveat…be aware with November ends tourist season. Prior to booking, I asked about visiting Inis Oirr, Aran Islands, a sheep farm and Skellig Michael but, upon arrival was told “closed for the season”. Still, Vagabond Tours is recommended and kudos to them for a lovely trip with very comfortable lodgings chock full of charm and with breakfasts to die for. Out of 29 counties in the Republic of Ireland, we traveled through the majority and three of the four provinces: Leinster, Munster and Connacht although I later visited Ulster in Northern Ireland on my own. 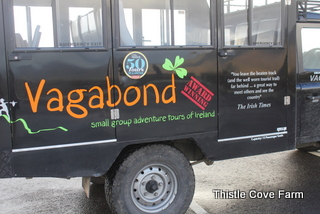 Going
south, one of the first stops was the magnificent hill top setting of Rock of Cashel where the wind was beating a few tears from the
clouds. 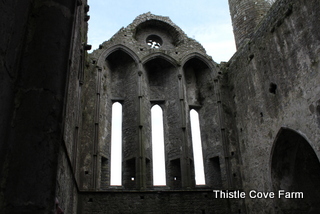 It reminded me of home and I knew, better than most, what it
would feel like in a few months. What was a chilly, blustery day
would become bitterly cold, making the monks earlier decision to
leave for warmer climes an understandable one. This group of 12th, 13th and 15th century medieval relic buildings keeps watch across the valley where an Abbey once nestled, protected from
the worst of the wind. Even so, when the monks left, the nuns
followed. 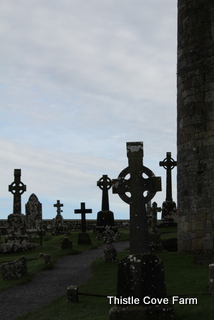 
BlarneyCastle was a delight. At least, I’m sure it would have been had I
gone but, having no desire to press my lips where hundreds of
thousands have pressed their flesh, I bypassed the Castle and had a Murphy’s and lunch in 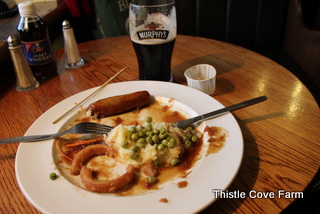 Muskerry Arms pub and also the first place I saw “my people”
meaning a farming gent, sitting at the bar, Guinness in hand, barn coat
spread open across his body, muddy boots resting on the fender and
his newsboy hat pushed off his forehead. He was holding court and I
could only imagine the exchange having to do with the weather (of
course), harvest, autumn planting, the price of petrol and a dozen
other topics peculiar to those living close to the earth and her
seasons.

A walk up the road and a little retail therapy meant a wool vest and snood at the Blarney Woolen Mills which were, eventually put into use. In some of the outdoors photos of me, it looks like I’m as round as I am tall and that’s due to the enormous number of clothes I have on. I took silk long johns, wool sweaters, Dave’s Barrow, Alaska fleece jacket with hood, a rain hat and rainproof jacket and wore Patagonia waterproof boots all of which came in handy when a stop alongside the road meant a visit to the fairy glen.


Mercy! I’m exhausted and it’s just the first day or two and am hopeful you’ve enjoyed the travelogue and photos thus far and will return for more episodes. I am so grateful to Anita for hosting this little party; it’s bringing back so many wonderful memories and I’m enjoying myself...all over again… 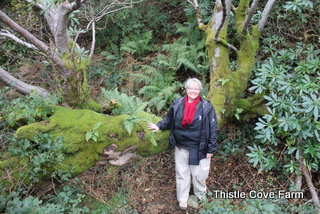