My Grow Your Blog Part post is here and there are two giveaways.

Time again for Patrice and her Chats on the Farmhouse Porch although, since it’s frigid cold she’s moved inside…don’t let anyone tell you she’s not bright as a copper penny! First, Q&A, then a catch-up with farm happenings. 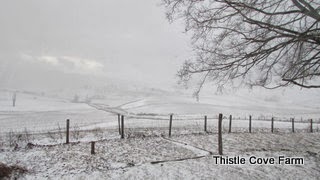 1. Have you tried any DIY cleaning products or skin care products from the i-net? I did make laundry detergent but it’s in need of a boost due to limestone, iow very hard, water here on the farm. I usually throw in a handful of baking soda to boost my home made detergent. Our well is 650 feet deep and gives 75 GPM (gallons per minute); we think we hit an artesian well and it’s the sweetest, coldest, clearest water I’ve ever drank.
I make my own cleaning fluid for kitchen and bath and, to clean windows, I buy the cheapest vehicle window fluid and put it in a spray bottle.
As to skin care products, if it’s good enough for MFK Fisher, it’s good enough for me and I use the butter wrapper to moisturize my face. I also use EVOO on my face and body and it works wonders, especially in winter but the downside is the dogs love to lick me. Also using a humidifier in the bedroom helps a ton. 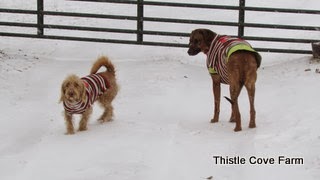 It’s been so cold the dogs are wearing two sweaters and still shivering. It’s 12:30 p.m. and the high for today is around 8 above zero F.

2. Do you like to enter sweepstakes, giveaways or prize drawings. Not so much but I’ll enter a giveaway on a blog; that’s total fun. I’m participating in Vicki’s, 2 Bags Full,  Grow Your Blog Party and, for the second year in a row, it’s fun. It’ll take me a while to visit all the blogs, there are almost 600, but I’ve enjoyed those I’ve visited thus far. I start at the top and work my way down.

3. How often do you visit your library? It’s almost 20 miles, one way, from the farm and I’m there, usually, once a week. I figure my county taxes buy me the county library, law enforcement as in sheriff’s department and the landfill and I pay a private contractor to pick up trash weekly. Other than that…what, pray tell, do I get for the thou$and$ of dollars the county charges me? 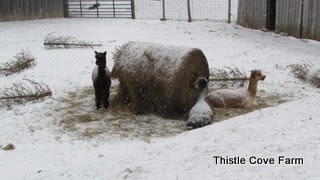 The ‘pacas are able to get to the same hay bale as the sheep. As you can see, it’s also in the same small lot where the Christmas trees were placed; sheep and ‘pacas alike enjoyed having a bit of green in their diet. This time of year, it’s a real treat.

4. Do you have a simple mobile phone? It’s a straight talk from WalMart, does that give you a clue? There are a lot of advantages to living in a rural area, having mobile phone service isn’t one of them. When I move to central VA, I’ll go on my sister’s plan and buy a smart phone. I said it before, “smart cars for dumb people” and now it’s going to be “smart phone for a dumb user…me!” Dave was the high tech geek and I’m still the low tech geek. I’m not as bad as I used to be, I’m now able to watch DVD’s on the television. When he was alive it was easier to say, “Pretty please…”. Now, if it does, or doesn’t, get done around here the person to blame is the one in the mirror.

5. Tell Patrice something new or interesting. Hmmm, I’ve been knitting hats and scarves to take to a neighbor’s restaurant. Ashley and Daddy John have opened Fisher and Co. Restaurant and I wish them well. They have great food and, after getting their sea legs under them, are to a terrific start.
I just ordered the year 2011 of my blog to be printed; should arrive next week, if not sooner. Next to be printed is 2012 and I’ll be caught up. If you’ve never had your blog printed into a book, you should consider it. It took me years to make the decision and now I wonder what took me so long? Especially since Dave died, my soft cover blog books have been such a pleasure for me. That first year is still a total blank, the shock was tremendous and I haven’t a clue how I functioned. The only thing I know is God kept me each and every step. Blog2Book has printed 4 books for me and I’m quite happy; what can I say, I started blogging back in the dark ages. 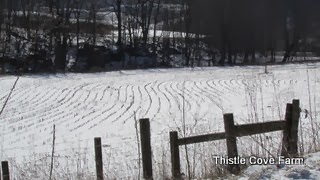 We’re in the midst of a winter storm, extremely low temps, wind and it’s taking a lot of me to keep chores and the wood stove burning. People talk natter a lot about vortex, global warming and the like but all I can say is weather records have only been kept since 1880, according to this site. Who can say, with any degree of certainty, they know squat about the last few million, few thousand or even few hundred years? No one, that’s who! Especially those who have made Billion$ off their brand of an inconvenient truth to a kool aid drinking public. If ever there was a man who liked to hear himself talk, it’s this one or this one. They’re twins from different parents. I do know…when politicians talk, I’m watching what they do and, mostly, the talk is all lies in order to line their pockets. Good luck buying ice water in hell, you bunch of shysters. 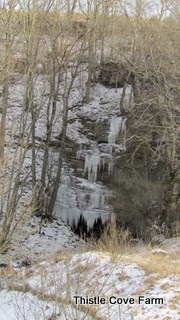 We’ve been having a typical Appalachian winter…snow, wind, ice, low temps and it’s made chores extremely difficult. Carly Shetland is still eating, drinking and taking her meds twice a day, blind Harry Shetland (sounds like a blues musician) is eating and drinking well (and should be since I carry it to him and put it under his nose twice a day) but poor Sophie Shetland isn’t doing all that well at all. She lies down, rolls over, gets cast and can’t get to her feet. I’m going to the barn 3 or 4 times a day to get her to her feet where she stands, stunned, until she can move around a bit. She and Harry both have warm water to drink because I bought another electric water bucket. It was just too hard on me, trying to break ice out of black rubber buckets and was less expensive to buy another electric bucket. I’m going to take some of Carly’s meds to Sophie and see if they’ll help. It’s the last thing I know to do. 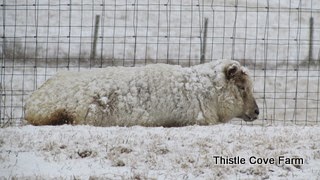 It’s time to get the mail; in order to do that, the Ranger will be put into use. When it’s this cold, I’m tentative about walking farther than the barn. It’s about a football field walk, one way, to the mailbox and it’s cold enough my gloved fingers begin to turn numb before I get down the driveway. Plus, I’m not crazy about the dogs walking on the road as I’m not sure what the highway department has laid down. While I’m out, I’ll check on Sophie Shetland and, probably, pull her to her feet. Yes, my back does constantly hurt, now that you mention it.

My brother wanted to know what I do all day so I told him I tend to animals, keep a fire in the wood stove as well as clean it of spent ashes, clean house, do laundry, dishes, am packing stuff to move, sell and giveaway, working on a marketing plan to sell the farm and take copious rest breaks. The older I get, the harder it is for me to recover from the tremendous cold so rest breaks are urgently necessary. On the GYBP someone made the comment reference me and the farm, “…a piece of the simple (ha ha) life” and it made me smile. I think the main difference between me and urban dwellers is, I’m more focused on food, shelter, clothing. Sure, I’d love to live closer to an urban area, say an hour away (book stores, coffee shops, thrift stores), but I’d still spend most of my time at home. Home is where I’m happiest, it’s where my animals are and it’s where I want to be. I’ve spent a lifetime getting to this stage and I don’t want to miss a second. Other than the name of Jesus, home is the most beautiful word in the world.