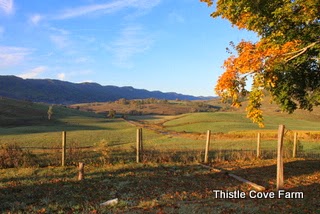 Autumn is my favorite season but I say that about them all. Dave died in Autumn and that which was already bittersweet has become a bittersweet burden. Thistle Cove Farm and this valley are breath taking and heart catching beautiful. I am so blessed to live here, even without Dave, I am so blessed to live here. All the seasons, each season, has beauty that bids tears on a daily basis and the crisp autumnal season carries a bittersweet glow; a reminder that even earth needs her sweet rest. The golds, oranges, reds and russets of October will soon give way to November’s storms. October’s death is peaceful, even serene, but November will scream in the timeless agony of howling winds that threaten to, then do, rip the decreasing daylight into increasing night. Some nights, the rain becomes ice pellets and I am happy to sit inside, close to the fire with dogs and cats cuddled ’round. 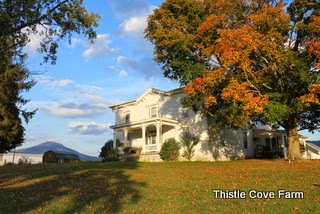 Between the falling leaves and the Canada geese calling, it’s Autumn on the farm. A lot of days are gray and overcast but when the sun shines, it’s a Gift of the finest measure. I think it’s going to be a harsh winter and have been working, almost feverishly, to get the farm and house ready. The chimney sweep has been here; both chimney and wood stove are ready. All that needs to finish is to bring a load of wood from barn to back porch then wood laid in the stove to be match ready.

The propane tank was filled this summer so the propane heaters are ready as well. As a matter of fact the pilot light was turned on in the bathroom and even that small flicker of heat is enough to dampen morning’s chill. A young man was here to work on the furnace and, God bless him!, he thinks my oil bill might be cut by one-third; dare I pray for one-half? I neglected having the oil furnace cleaned after Dave died; it just didn’t dawn on me it needed to be done. The furnace was full of soot and a piece had broken which meant the furnace wasn’t working properly and I was wasting money, a lot of money. Thank God, the haze of grief has lifted enough for me to begin to get life back in some semblance of order. The grief still catches me by surprise though; I think I should be ahead by now but, weekly, am reminded of how off-center my life has become. I ponder, a lot, of womenfolk in my family and how they kept so busy after their husbands died. The majority of them lived in Appalachia and we share that similarity also. 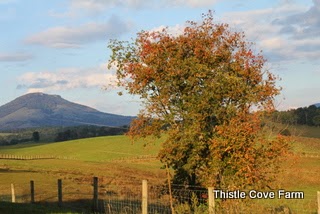 Both Grandmothers kept gardens, sewed, did handwork, canned and put up food and, generally, continued to keep body and soul together. It was harder for Grandmother B. who lived on the small, hardscrabble farm she and Granddaddy moved to when they married. Grandmother L. kept busy with all the above and then, in her late sixties, she began keeping foster children. Today, many a child owe their good start in life due to her largess.

Aunt Bonnie, Daddy’s oldest sister, remarried but still worked tremendously hard on her small farm. She had milk cows and would churn butter and sell milk, butter and buttermilk; she’d sell eggs from her small flock of chickens and, during those long Appalachian winters, in a tiny corner of her small bedroom, she’d make patchwork quilts. I don’t think she ever sold a quilt but would keep some and give others away. She gave me one, “Kid, you’re to use this quilt; don’t hang it on the wall or some such foolishness. It’s meant to keep you warm. Understand?” Of course I said, “yes” and slept under that quilt for years.

Aunt Esther, Daddy’s sister-in-law, quilted, did crochet, embroidery work, gardened and put up food. Both women had scads of grandchildren, great-grandchildren and great-great-grandchildren and both took it as a matter of pride those off-spring had something at Christmas and birthdays and, quite often, a hand crafted gift. Aunt Esther never re-married and only a few weeks before she died, during our last visit, she told me, “Sandra, I’m just so tired. All I want is to see Clarence, to be with him again.” She was widowed in her early 50’s and close to 50 years, my heart still breaks, remembering. She had offers but no one could ever measure up to Uncle Clarence; he was a man’s man and a man after God’s own heart. It’s been said by more than one wife in Daddy’s family, “No one could ever measure up to…”. A young girl told me, “I’m still single because it’s going to take someone amazing to get me to marry.” I told her, “I’ll be a widow a long time, maybe always, because it’s going to take someone more amazing than Dave for me to re-marry and I can’t see that happening.”

I talk to God all the time; fortunately, He’s never said, “Sandra, hold that thought, I’m busy.” He always has time for me but I’m beginning to feel my heart has grief callouses from the daily life struggle without Dave. The pressure of isolation is heavy even though I keep very busy on our home stead. Recently, I read, “boredom is the disease of a vacant mind” and nodded, appreciatively. I cannot remember the last time I was bored, probably before meeting Dave, and there’s always something to do and, even when I’m “at rest” the knitting basket, quilt hoop or embroidery lie ready to be picked up and a few rows knitted or stitched. If God allows me to live until my work is done, I’ll be older than Methuselah when I die. Fortunately, my timetable isn’t God’s timetable and I’ll go Home when called; just as will we all. 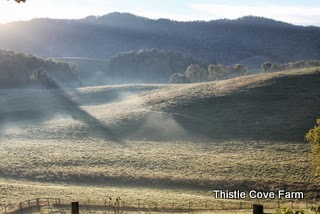 ~ morning fog ~
“There is so much beauty in autumn and so much wisdom;
so much separation and so much sorrow!”
~ Mehmet Murat ildan ~

There’s a sense of ennui in Autumn; something that’s not felt in other seasons. Dave would tell me my Autumn posts always carried a fair measure of ennui, of bittersweet. Those last weeks of his life he would tell me, “Try not to grieve too much, try to remember how to live again.” But he never told me how and it looks like I’m a slow learner. I met Dave in Winter and lost him in Autumn; those years between were heady years, full of friendship, then adventure and love and finally contentment. You might as well know, I want need to leave this valley, this farm. I want need to move to a place where Dave and I never lived. God willing, I’ll take the animals and memories and make a fresh start where family and friends await. I don’t want to but it’s what’s best; I want to live life again, not merely survive. For almost two years, I’ve lived Autumn and Winter; I want to live Spring and Summer again before I die. 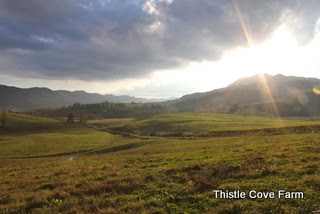 ~ the view from my window ~