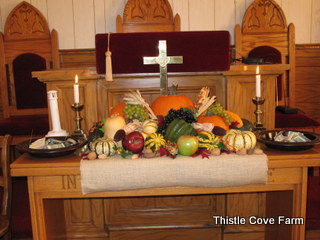 “In everyone’s life, at some time, our inner fire goes out.
It is then burst into flame by an encounter with another human being.
We should all be thankful for those people who rekindle the inner spirit.”
~ Albert Schweitzer ~

“Hem your blessings with thankfulness so they don’t unravel.”
~ proverb~

“Instead of complaining that God had hidden himself, you will give him thanks for having revealed so much of himself.” ~ Blaise Pascal ~

“A man who is eating, or lying with his wife, or preparing to go to sleep in humility, thankfulness and temperance, is, by Christian standards, in an infinitely higher state than one who is listening to Bach or reading Plato in a state of pride.” ~ C. S. Lewis ~
“I would maintain that thanks are the highest form of thought, and that gratitude is happiness doubled by wonder.” ~ G. K. Chesterton ~

“The only people with whom you should try to get even, are those who have helped you.”
~ John E. Southard ~

“A sensible thanksgiving for mercies received is a mighty prayer in the spirit of God. It prevails with him unspeakably.” ~ John Bunyan ~
“An active faith can give thanks for a promise, though it be not as yet performed, knowing that God’s bonds are as good as ready money.” ~ Matthew Henry ~

“Thanksgiving comes after Christmas.”
~ anonymous ~
“For everything created by God is good,
and nothing is to be rejected,
if it is received with gratitude;
for it is sanctified by means
of the word of God
and prayer.”
~ I Timothy 4:4-5 ~
If you’d like a name added to the prayer list, please let me know…but no anonymous requests, please. Names will be kept until end of the year and then removed so the list can begin anew in January. Around the world, people are praying.
Prayer Keeping ~ Maxine ~ Roland ~ Jason and Sara ~ Patty ~ Lizzie ~ Pamela ~ Marydon ~ Katie ~ Debbie ~ Sandy ~ Geoffrey and Terry ~ Jane and Lance ~ Misha and J ~ Timi’s family ~ Stephanie’s family ~ Quesenberry family ~ Smith family ~ Jones family ~ LindaSue ~ Raeann ~ Mike ~ Wayne ~ Steve and Gwen ~ Greg ~ Ethan ~ Mildred and John ~ Billy ~ Charles and Cassie ~ Erik and Jessica ~ Ally Belle ~ Claudie ~ Maryann and family ~ Annie’s family ~ Evan ~ Minnie ~ LaShon ~ Sparky ~ Kathie ~ Charlotte ~ John ~ me ~
Share
Pin
Email
« Thanksgiving 2012
Lily, meet Levi »