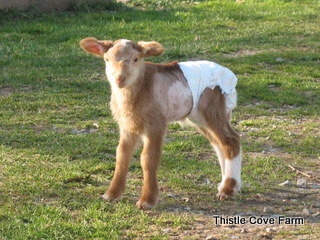 After pouring my guts heart out in the last post, I feel ever so much better, although, I think it has more to do with your kind comments than the emptying of my soul. In my case, soul emptying isn’t so much courage as the fear of standing before God, hopefully in the far future, and having Him say, “I gave you such a Large Life, why did you choose to live small?” shudder!
In this “grief journey”, I’ve learned it’s best to just go with it when it happens. There’s no stemming the flow of grief but I do try to stay on the farm, behind locked gates, when grief overwhelms me. If I’m in public, I head for the nearest restroom or back to the car; there’s no need in causing others discomfort and, if there’s one thing I’ve learned, folks who can handle a crying woman are few and far between. When I’ve encountered someone in distress, if it’s someone I know, I give them a hug and ask if I may pray for them. If they say “yes”, I start praying; if it’s someone I don’t know, perhaps I’ll touch them on the arm or shoulder and ask the same question. As the old saying goes, there are no atheists in a foxhole and no one has ever turned down my offer of prayer.
Each week brings new opportunities to work as well as the same ole grind. Of course, my same ole grind is beautiful to me…lambs, calves, kittens, spring…and, once again, the cycle of grieving has taken an upturn. In other words, grief will be “manageable” for a day or three or God knows how long, before I’m swamped again. It’s a roller coaster ride sans seat belt and all I can do is hang on and try to keep up but knowing God’s plans are for me to prosper and do well, to give me hope and a future while I cast my cares upon Him because He cares for me. With Him carrying me and the load, I can do this grief journey! sort of.

“That it will never come again is what makes life so sweet.”
~ Emily Dickinson ~
Ashley, a neighbor, works at her SIL’s vet clinic and is forever bringing home the waifs that are abandoned or need special TLC. Like the lamb above; he was attacked by a dog and sustained severe injuries all over his body. There are those who say if you look cross-eyed at a sheep, it will fall over dead. This lil’ feller says naaaaaay! He’s still alive, doing well, drinking a bottle and wearing diapers because he’s living in the house. I told John, Ashley’s husband, “I could never work at a vet clinic; it’s a license to starve.” Meaning, of course, I’d bring home Everyone who needed a home. How on earth do you think Dave and I ended up with 5…sometimes 6 when Jake comes to eat…dogs, 3 house cats, barn cats, rescued sheep and horses? 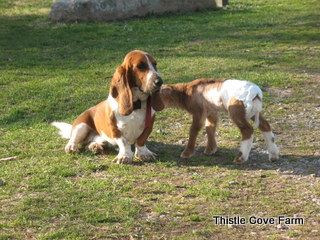 ~ Flash and Lambie ~
Flash, John’s “basket hound”, is long suffering as Lambie nuzzles in the, unrealized, hope of finding a working teat. 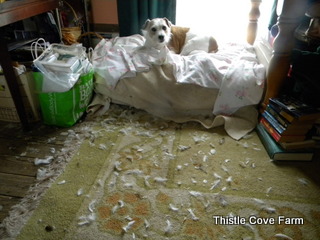 ~ is this the look of guilt? ~
One of the dog beds is a feather mattress…hard to believe, eh? I bought it at a thrift store, not knowing it was a feather mattress but, as you can see, now I know. It needs a sheet, sewn into a U shape, so I can stuff the mattress in there, fold the end under and stop vacuuming feathers every week. It looks like someone has killed chickens in my office! 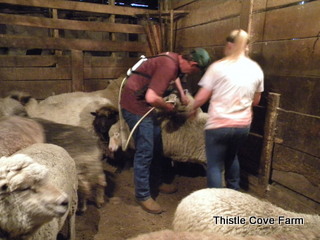 ~ Daniel, Morgan and my sheep ~
Last week was sheep de-worming and we’re going to shear in April. The farm isn’t open to the public any longer, I can only do so much and something had to give. Friends have asked if they can come help; well, gosh, gee, if you’re sure….HA! free labor…gotta love it! I’ll fix a wonderful homemade lunch – bread, soup, dessert, iced tea, coffee – and we’ll make it a fun day. My little flock is only 28 so it won’t take Clinton but three hours or less and that’s if he takes his time. I wanted to shear this weekend but Clinton is knee deep in lambing and can’t take time away from his own flock. In the next few days, I’ll try and get to his farm to take some photos.
Our Cove Volunteer Fire Department is active and we’re up to 18 members…hurrah! I won’t fight fires but I’ll bake cookies for every meeting and take notes, keep records, etc. Basically, whatever makes our fire fighter’s lives easier, I’m there to do willingly. We’re a very small community but spread out over thousands and thousands and thousands…you get the idea…of acres. In our valley there are about thirty people but we go to the surrounding valley’s when we’re called upon to help. None of us are paid, we do this because we want to help ourselves and each other; we live the way our Grandparent’s lived and the way we’re admonished…treat others the way you’d want them to treat you.
That’s not to say we don’t argue, fuss and fight at times but we always manage to kiss, figuratively, and make up. We have to; we’re dependent upon each other and look out for each other’s homes, livestock, fences, each other. 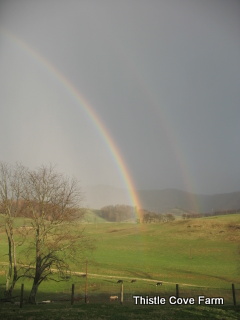 ~ double rainbow ~
Throughout the years, we’ve seen several double rainbows off our back porch. Did you know before Noah’s ark and the 40 day and night rain, there’d been no rain upon the earth? Only dew and after the flood subsided, God gave Noah a a promise or covenant that said He, God, would set a (rain)bow in the sky to let it be know He, God, would never again destroy the earth by water. The Bible is full of God’s promises and, lest I forget, I’m forever reminding God of His promises. It helps me no matter what emotions are racking my brain and body and it’s the only way I can live. With God’s help, I simply live, each and ever day. Bless His name forever. 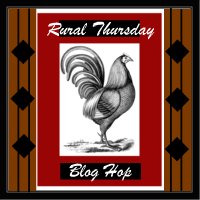