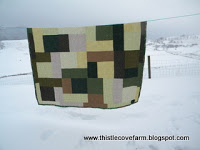 This is the quilt I made for JW, my nephew. He loves to hunt and is a real home-boy, steady, reliable, courteous and spends his evenings, mostly, at home. Last year, I made him a fleece throw and he uses it constantly. Unfortunately, it’s a tad short and he has to choose to have either his chest uncovered or his feet. This quilt is about double sized, perhaps a bit larger, and should cover him more than adequately. The colors were chosen because they look camouflage but, I don’t think, as distracting. In fact, I think they are rather pleasing and I wouldn’t mind having a similar quilt with a different back.

It’s a Turning Twenty pattern on one side and on the other side, a stag deer pattern on a solid piece of material. Due to my recent eye injury, I was unable to hand quilt so had this one machine quilted with maple leaves and then hand hemmed and am over the moon with how nice it looks. I am now, officially, a huge fan of machine quilting! 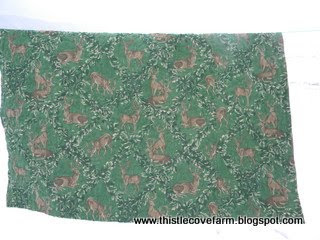 I tried to get close up so you could see the stags but it looks slightly wonky due to the surrounding snow.
Perhaps this is better: 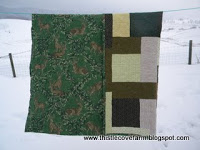 JW has a brother, Staff Sgt. D., who is serving in the Air Force. I have material to make him a quilt and will, hopefully, have it ready for his May birthday. Every year it seems I’m getting ready for Christmas sometime in late summer/early autumn and then WHAM! it’s here and I’ve not finished everything I wanted to make for folks. Fortunately, the nephews are forgiving lads and as long as I keep the gifties coming, they are kept happy. -smile-

The back porch is always a good place to sit and watch the pastures, the valley and Morris Knob. This hand built chair is lovely with the snow piled upon. Did you know five inches of snow equals one inch of water? We had about twenty plus inches over the weekend, and more since, so Mother Earth is drinking her fill, slowly. 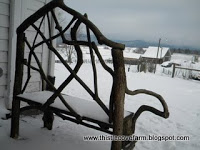 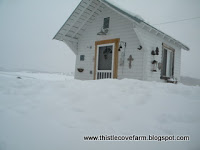 Recognize the studio? We didn’t have that much snow but we did have snow drifts that large. Boscoe Mancat now lives in the studio and he’s grateful when I make my way there with his canned tuna, fresh water, cat food and fresh kitty litter.
Christmas decorations are simple. Inside several Nativity sets adorn separate rooms and outside wreaths hang on gates, studio and barns. 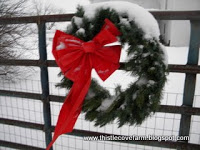 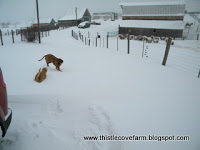 The puppies love LOVE the snow and spend hours playing; so much time playing outside that when they come inside, they are covered in snow. Sam more than Sadie and he has huge snow balls hanging off his feet and face. He just gives me a goofy grin and jumps up for lovin’. Sadie does her attack stance while Sam watches thoughtfully. Sadie runs… 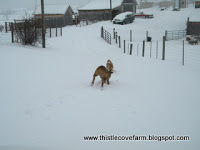 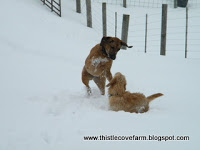 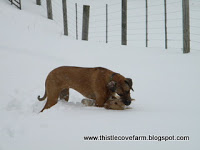 Sadie rolls Sam into the snow… 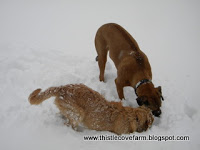 Sam escapes and runs back…yes back! for more fun. 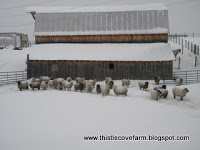 The sheep aren’t so impressed but then, for the most part, they are aged. I’ve got a couple of old guys who will be put into the barn and short lot when if the snow melts anytime soon. Now, I just feed them as separately as possible from the rest of the flock and they seem to be doing as well as possible…considering their age. They must be close to 15 or 16; I brought them, from someone else and to Thistle Cove Farm in 1997, or thereabouts, so am not really sure of their age. 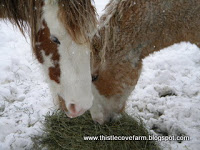 Peaches and her son Dandy Man both eat from the same flake of nutritious alfalfa. Peaches is Queen and although she allows Dandy to share her food, she makes sure he doesn’t eat more than she allows. They are both American Curly horses and Peach has a wiry, poodle coat while Dandy has a straight coat.
Sam has springs where his legs should be. If he wants to jump up, not a problem, he simply looks at where he wants to be and then POOF! rises to that point. It’s absolutely amazing and he’s constantly surprising me with how high he jumps. 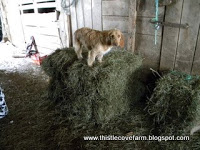 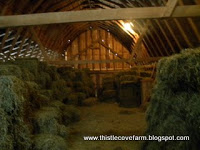 One of the things that brings me great joy is a barn loft FULL of lovely, sweet smelling alfalfa. We put up more than 300 square bales of hay this summer as well as a couple of dozen round bales. The square bales weigh anywhere from 50 to 75 pounds and the round bales are 1300 pounds; enough for us and anyone needing hay for their livestock. Happiness is Hay, especially when you’ve mouths to feed!
Merry Christmas, until next time,
Blessings ~ snow ~ quilts ~ machine quilters ~ water ~ beloved sister, mother of beloved nephews ~

Share
Pin
Email
« When I Grow Up…
Christmas Week »