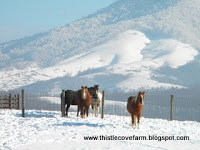 I’ve not ventured off the farm since the snow storm but the needs of the animals will always make me go. The horses and sheep both needed minerals and anyone who knows me knows I’m keen on minerals. I firmly believe good food, good water and minerals make the fleece as well as the sheep. The horses look much better when they, too, have adequate minerals. 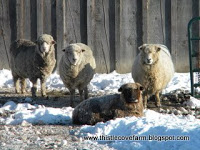 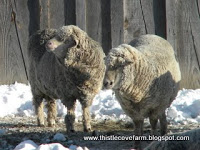 ~ Polly and Sally, Merino twins ~
Polly and Sally are Merino twins who are pigs in sheep’s clothing. These big girls EAT and will knock me down if I’m not paying attention. Yes, they were bottle babies and have never gotten over being held and fed and still firmly believe it’s their due. As you might expect, this is Not A Good Thing. Just
imagine, sheep are about knee high and, when rambunctious, are perfectly capable of taking out a knee. At their very worst, they are capable of butting someone to the ground and then killing them; it’s been known to happen. BTW, the sheep don’t really look wonky; I think that’s due to my making the photos smaller so the page will load more quickly. 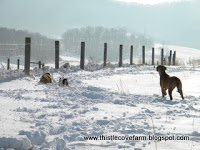 ~ Abbie, Sam, Sadie ~
It tough, having to perform one’s toilette when the snow is belly deep and there’s an audience. Perhaps now the dogs know what it’s like for me…ya think? -smile- Having dogs is like having children; I’ve always got an audience, I’m never alone and someone always wants to poke their nose in and ask, “watcha doing? Even so, it’s still not as bad as needing to go when I’m caught at the barn. There’s nothing like taking a quick wee and having a horse’s nose investigate. OH MY! 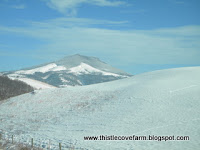 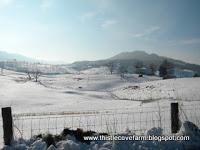 ~ earth home of my heart ~
Coming home, we round the curve on Rt. 91 and see Home. There aren’t many times I fail to, at the very least, slow down…but mostly I stop…just so I can glimpse home. It always quickens my spirit, catches my breath and makes me count my blessings; God is so gracious and kind to us. 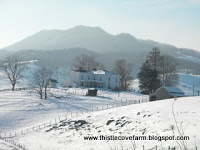 The homestead is just smaller than thirty acres; all that’s left over from a pre-Revolutionary War land grant multi-thousand acre farm. The full story to be told later, after Christmas, but, for now, just know it’s home. 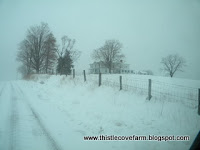 ~ in the midst of the snowstorm ~
Each day I check the round bales of hay to make sure the horses still have plenty to eat. The dogs and I take the Ranger and even in the deep snow, in four-wheel drive, I’m able to go where I need to go. Coming back from the lower pasture, I stopped to take this picture. It shows the starkness of the area but it also shows the beauty of home.

“Every house where love abides
And friendship is a guest,
Is surely home, and home sweet home
For there the heart can rest.”       ~ Henry Van Dyke ~


“Home is the one place in all this world where hearts are sure of each other.  It is the place of confidence.  It is the place where we tear off that mask of guarded and suspicious coldness which the world forces us to wear in self-defense, and where we pour out the unreserved communications of full and confiding hearts.  It is the spot where expressions of tenderness gush out without any sensation of awkwardness and without any dread of ridicule.”                     ~ Frederick W. Robertson ~

“I had rather be on my farm than emperor of the world.”  ~ George Washington ~

Merry Christmas, until next time,