Lately, there’s been a sense of ennui around here. Nothing definite, nothing I can, quite, put my finger upon but, a very real, air of ennui. The dictionary says ennui is “a feeling of utter weariness and discontent resulting from satiety or lack of interest; boredom”. I am not bored nor do I have a lack of interest; in truth, I have so many interests I tend to be scattered without focus or concentration. As to “satiety”, that’s not true either except in the idea of being satiated with work. There’s always work to be done and I am overwhelmed with work, to the point of being so far behind, I feel I’ll never catch up. I owe people yarn samples, have for some time, and am kicking myself to ‘just do it!’

Perhaps the ennui stems from the political scene: it seems so overwhelming and unbearable. We, the voters, are so divergent, so contrary in our opinions and beliefs and seem to have a hard core idea of where, how and when the direction this country should be headed. We don’t seem to listen anymore, especially our “elected representatives”; they especially seem to be listening solely to WIIFM radio. They only want to know, “What’s In It For Me” and no one else matters, especially constituents.
I’m fearful. For us all.

Perhaps the sense of ennui comes from living in a haphazard state. Regardless of what I, or Dave, wanted, our house is still not finished from the water damage of eleven months ago. We’re headed into winter with things left undone even though I asked, begged, pleaded and, eventually, demanded the work be accomplished. All for naught but I’m still going to “fix up” like everything has been accomplished to my satisfaction. The dining room will have furniture moved in, hopefully, this week and the drapes and sheers have been hung. I’ll unpack those many, many boxes of porcelain, china and “precious goods” that Dave’s mother left behind.

Hmmm. Wait a minute. Perhaps that’s also a cause of ennui. Dave’s mother passed away a year tomorrow. I wouldn’t be surprised if my body is responding to what my mind pushes away. That was a time fraught with overload; she became ill on 3 Nov and passed away on the 19th. A short, furious illness that was caused, essentially, by old age; she was well beyond 95 when she passed away. She died on Wednesday, a few moments before midnight, and was buried on Saturday; that time was full of details, details, details that are now, mostly, forgotten. Not the day though. That Saturday was bitter; the temperature was about 24F, wind chill was around 15F above, snow snugged the ground and sleet split the sky. The only good thing about that week were the people, family and friends who gathered to support, pray and love us through that time. 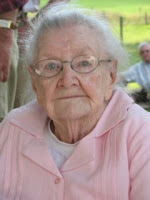 Yesterday, we took Boscoe to the vet and there’s yet another mystery. He wasn’t getting better as quickly as he should have and a vet visit was in order. Dr. Anne hasn’t a clue what the underlying cause of his epizootics are but she thinks environmental. She also thinks his immune system has crashed and his paws look like he’s been “introduced” to chemicals that have eaten away the top layers. He was full of ear mites and fleas – both signs of a compromised immune system – and she stuffed him full of antibiotics, flea treatment, ear mite treatment and steroids. She thinks he’ll pull through, we should know in a week to ten days. Bos is already feeling better; he greeted me this morning as a cat should, by stretching and taking notice of what was going on around him. His appetite is excellent and he’s shown an enormous appreciation for the canned tuna we’ve been feeding him. Bos is eating dry cat food but we felt he could do with some pure protein as well; he agrees. He also thinks he should be allowed to go outside but, not yet, perhaps not ever again. 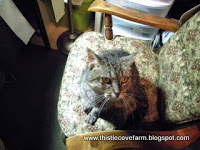 In the past week, I’ve mailed a baby quilt, three hats and a fleece throw to folks; have almost finished the quilt top for my nephew’s Christmas gift and have knitted two mobius scarves.  I’m thinking some serious studio time might put me to rights or, at the bare minimum, leave me with something to show for my time. There are several quilts to finish as Christmas gifts, some more knitting, some mini-art quilts and a few other smaller projects. I’m having to plot my time carefully so things will be finished and received by folks by Christmas day. 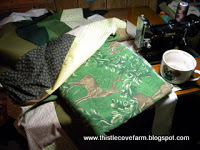 Two days after Christmas I leave for Tomsk, Siberia where I’ll spend time in an orphanage and then go to Moscow where Christmas will be celebrated with Russian Christians on Epiphany, 6 January. I love celebrating Christmastide, more so than just Christmas. It’s an entire Season from Advent, 1 Dec., through Epiphany, 6 Jan., and prepares us, Christ’s disciples, to look ahead to world missions in light of the Nativity.

In the western world, we’ve gotten away from the Christmas SEASON and are focused solely on the material aspect of the day – the buying, wrapping, giving and receiving of gifts – and not The Gift that makes the rest possible. Christmas begins what Easter finishes: God’s Divine Plan.

One suitcase is being filled with little gifts for both children and adults and it makes me so happy to open it and think of the joy they will bring. The Children’s Home, as orphanages are called, houses children with Fetal Alcohol Syndrome, Down’s Syndrome and those with physical handicaps. Gifts include small hand lotions, vinyl shopping bags, stuffed toys, balls, packets of flower seeds, bubbles, New Testaments, yarn, knitting needles, crochet hooks and whatever else can be found before Christmas. If you’d like to send a little something, let me know and I’ll give you my snail mail address. I’ll try to blog from the road so pray that and the trip will be a success.

A bucket of walnuts, soaking in water, will be used to dye some naturally colored Thistle Cove Farm yarn. I always enjoy using walnut dye on dark yarn as it gives a richness and depth of color that caresses the light in a way man-made dyes cannot. 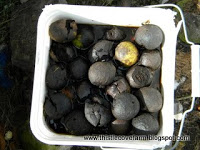 I visited family this last weekend; we met at Mother and Daddy’s cabin in Webster County, WV and rode over to Randolph County to visit my brother. Fairview Farm, his farm, is for sale and is absolutely beautiful! It’s about 130 acres, bordered on two sides by National Forest, about 19 miles from Snowshoe, has some pasture, some wooded, all fenced, a pond, outbuildings, two-vehicle garage and much, much more. It’s Very Private, with a quarter mile driveway that juts off from a dirt road that juts off from a two-lane, un-lined secondary road. 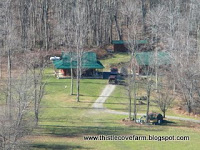 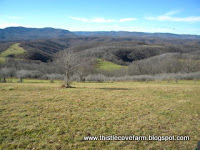 It’s not good, I don’t believe, for me to focus upon myself too much; self reflection tends to result in too much belly button gazing and serves to compound what niggling little problems I think I might have. I much prefer to use my blog to focus on the Good Things but, if you’ve read this entry and said a prayer, please know you have my gratitude. That’s one thing I enjoy about blogland – “meeting” other folks and tucking you into prayer as you are brought to mind throughout the day and week and, hopefully, y’all do the same.

If you’re interested in having a first edition copy of Anne Morrow Lindbergh‘s Gift From The Sea, leave me a comment and your name will go into the drawing. Please note there is a name and address on the inside cover and that, probably, detracts from the value but it’s still a free book, shipping included.

From Gift From The Sea:
“…I want first of all…to be at peace with myself. I want a singleness of eye, a purity of intention, a central core to my life that will enable me to carry out these obligations and activities as well as I can. I want, in fact – to borrow from the language of the saints – to live “in grace” as much of the time as possible…By grace I mean an inner harmony, essentially spiritual, which can be translated into outward harmony…I would like to achieve a state of inner spiritual grace from which I could function and give as I was meant to in the eye of God…”