The Hunt for the Unicorn Tapestries ~

Are you familiar with the Unicorn Tapestries? Some believe unicorns to be an animal of myth and mystery, a fable if you will. Not I. I believe unicorns existed until man hunted them out of existence just as other species have been hunted out of existence. I know many people who don’t believe in them just as they don’t believe our beloved companion animals and pets won’t be in heaven with us. 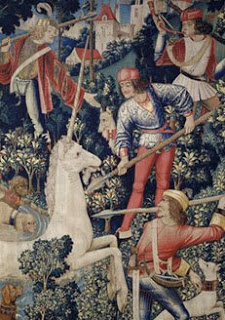 O ye of little faith! If one chooses to believe our beloved companion animals and pets won’t be in heaven with them…they are correct. Their faith won’t be rewarded. But for those who believe, what a day, glorious day, that will be when we, not only, see Christ but also our four legged friends!

Can you tell I’m a believer? -smile- Faith, as a child has, I have in abundance.

The Unicorn Tapestries are, generally, considered to be the finest surviving set of medieval tapestries in the world and the seven tapestries tell the story of a unicorn hunt. The Hunt of the Unicorn Tapestries, as they are correctly known, are hanging at the Metropolitan Museum of Art in New York City at The Cloisters and are believed to have been woven between 1495 and 1515 in the Netherlands. In 1680 they were noted as part of the inventory of belongings of French Duke Francoise VI de La Rouchefoucauld. In 1922, John D. Rockefeller, Jr. purchased some of the tapestries and in 1938 the Cloisters opened with the tapestries gifted to the museum.

The tapestries are woven in wool, metallic threads and silk and the vibrant colors were produced with just three plant dyes – weld for yellow, madder for red and woad for blue. Can you imagine?!! THREE dye plants! Only three! Yet those three, and combinations thereof, are responsible for these tapestries that defy description.

The Unicorn Tapestries are now being recreated at Stirling Castle, Scotland. The project began in 2002, is expected to be completed in 2014 and tapestries one, four and seven are completed. One of three weavers works every day, save Christmas and perhaps one or two other days on the Unicorn Tapestries. This is an amazing task especially when one considers there are only three primary weavers. Surely in medieval times there would have been dozens of weavers but we’ll never truly know.

Thimbleanna wrote about her visit to Stirling Castle and then The Cloisters where she saw both the original and the recreated tapestries. What a wonderful thing…to have seen both! Please visit her and read about her accounting as well as see a lot of beautiful photographs.

While extremely beautiful, I find the tapestries sad. The Bible speaks of unicorns, several times, and one time is Job 39:9-12 “Will the unicorn be willing to serve thee, or abide by thy crib? Canst thou bind the unicorn with his band in the furrow? or will he harrow the valleys after thee? Wilt thou trust him, because his strength is great? or wilt thou leave thy labor to him? Wilt thou believe him, that he will bring home thy seed, and gather it into thy barn?”

Do you think God created the unicorn simply because it gave His eyes rest when He gazed upon His creation? Can it be God created something simply for beauty? I think that’s possible just as I believe God has ways that are higher than our ways, wiser than our ways. Isaiah 55:8-9 writes, “For my thoughts are not your thoughts, neither are your ways my ways,” declares the Lord. “As the heavens are higher than the earth, so are my ways higher than your ways and my thoughts than your thoughts.”

It’s said the unicorn is the symbol of wayward, lost, foundling and stray animals. Thistle Cove Farm has a unicorn flying over the farm. Our human eyes can’t see it but the animals know it’s here; just ask the rescued animals who have found shelter and sanctuary here, they know it’s true. My eyes rest on their beauty and I thank God.

Blessings ~ The Hunt for the Unicorn Tapestries ~ weavers ~ unicorns ~ God’s ways and thoughts ~ a heaven filled with beloved companion animals, pets and loved ones ~