Today was Agriculture Day at Thompson Valley Fire and EMS Center. A while back, one of the area farmers had a tractor fire and wasn’t prepared with fire extinguisher, cell phone, walkie-talkie or even near to a house where he could go for help. All he could do was climb down off his tractor and watch as it burned.

Here we are in neighbor Bill’s barn lot as we all prepare to drive up the valley. In the close left corner is Red, driving our tractor. Dave has a business meeting and couldn’t take part in the fun today; he missed a really good time! 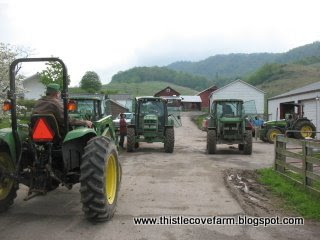 The newer tractors are able to travel at a faster rate of speed than the older models. I drove “cow’s tail” so traffic coming up on us knew there was a reason for going slow. Safety first, last and always! The rest of the tractors are, just barely, visible in the foreground while one of the older tractors travels a bit more slowly. 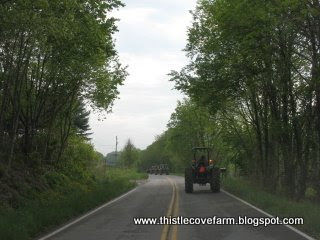 Wal-Mart is a good community neighbor, to rural folks anyway, and they gave $1,000.00 for the express purpose of purchasing and installing fire extinguishers on tractors and other farm vehicles. Other corporations came as well as extension representatives and it was a great day. The folks at the Thompson Valley Volunteer Fire & EMS Squad wrote the grant and today the “Cove Folks” drove in a caravan to be a part of the event. That meant a ten mile drive for us so Dave and Red, a neighbor, decided it was too far for me to drive. Red drove our tractor and I drove our Polaris Ranger. Several businesses donated prizes and I took a pan of homemade shortbread. I can’t compete with free farm equipment but I’ve yet to see a man who doesn’t enjoy something home baked -smile-. We also had lunch, thanks to the Farm Bureau women and other community women then, after lunch, got busy with fire extinguisher installation.

This group of men represents only a small number of the fifty or so tractors driven to the head of the valley. All of these tractors represent three farms and four out of the seven are owned by one farm; the rest of us own one tractor each. I told the men I had a great idea for a fund raiser calendar. In the same vein as “Calendar Girls” we should do a nekkid men with their tractors calendar to raise money for the community. One of the guys asked me if it would sell. I told him I thought it would probably sell really well in prison. They laughed and said they would pass the hat instead. 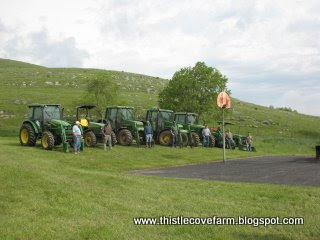 I thought a fire extinguisher worked by smothering a fire but I’m wrong. Mike Bennett, no relation, is the Thompson Valley Volunteer Fire Chief and told us there are three things necessary for a fire – heat, oxygen, fuel and if one of those is removed, the fire is extinguished. When using a fire extinguisher, he told us, “remember PASS – Pull the pin, Aim at the base of the fire from about eight feet away, Squeeze, Sweep left to right, right to left.”

Elizabeth, Mike’s wife, told us one of the most important places to have a fire extinguisher is in the bedroom. Of course, sly comments and grins ensued but she hastened to explain, “God forbid but you could have to fight your way out of a house fire during the wee hours.”

O MY GOSH! I never thought of that; I never even imagined it! While I do have fire extinguishers in the kitchen and in the barn, I have none in the bedroom but that will be rectified in the coming week; it will become a permanent part of my “kit” – flashlight, matches and candles. Thanks, Elizabeth!

This little feller is Mike and Elizabeth’s nephew and shows the correct and safe way to dress when driving an all terrain vehicle. It’s important to install safety guidelines at an early age; we want our children to grow up to be old farmers one day. 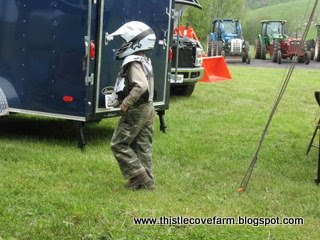 Daniel, Mike and Elizabeth’s son-in-law, installs a fire extinguisher on my Polaris Ranger. The grant was for any farm use vehicle and my Ranger certainly qualifies. And, yes, the Ranger proved, once again, to be a Man Magnet although several women gave it the big eye as well. It’s a good little vehicle, carries more than I can load, is safe and looks great…it’s a good thing indeed and now it’s a safer vehicle. 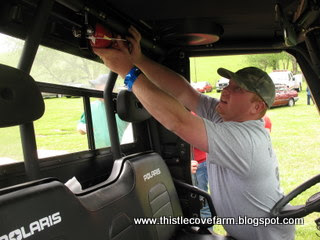 This little tyke is Dr. Anne’s son. Dr. Anne, you may remember, is our vet and her son is a FIT…Farmer In Training. Henry, his Daddy is a farmer and raises cattle and sheep. This little feller has it all going on…bib overalls and green and yellow John Deere tractor which, as anyone knows, is The Only Color Tractor to own! Just ask any JD owner -smile-. 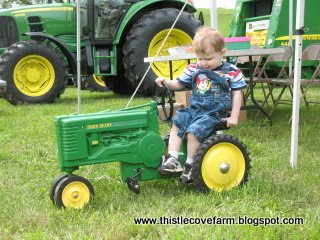 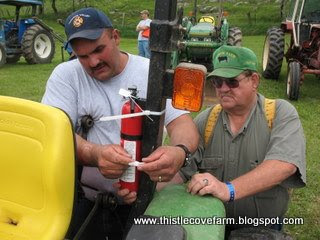 Headed home in early afternoon, satisfied we’ve done what we could to prepare ourselves for a fire emergency. This program is a gift to the community and will benefit the lives of many. The information learned, the fire extinguishers given and installed will, hopefully, never be used but they are there if ever needed. THANKS Thompson Valley Fire and EMS, Wal-Mart at Pounding Mill and the many others who gave time, prizes and money to make this event happen and successful! 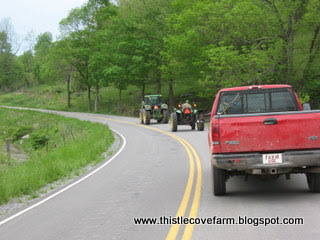