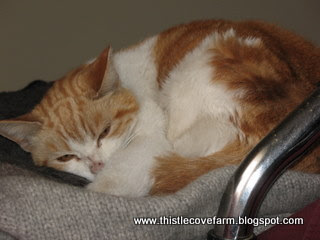 “Jenny, with a J, ta very much,” says the new one. She’s made herself at home, holds her own against Miss Hattie Cat, the teenage terror and, for the most part, side steps around Miss Kitty. Abigail and Gracie give her plenty of room especially after she smacked Abigail for coming too close to her nether regions. She smacked me as well but, as with Abigail, her claws were drawn.

It amuses me how the cats will claim each others’ space. “Oh, you’re sleeping on the wool sweater on top of the ledge? No problem, I’ll go into the office and sleep on the woolen pad on the chair.”

Thus far, everyone is adjusting, humans and animals and that’s a good thing.

Boscoe is doing better and he’s been turned outside again. His paw looks better and habit tells him to come when called so he’s getting his meds twice a day. I think he’s going to have to have a second schedule of meds and if I were braver, I’d catch him and pour peroxide on his paw. Perhaps I’ll wait for the Cat Sack before attempting such a painful manuover…potentially painful for both of us.

Today was just lovely for being outside and getting outside chores accomplished, so I spent the day planting flowers and fruit trees. The two apple trees are Grimes Golden and Rusty Coat. Grimes Golden is an old West Virginia apple tree found by Thomas Grimes in Brooke County, WV in 1790 although some say later. It’s such a beloved apple, a granite monument still stands in Brooke County in its honor. Nearby neighbor, John Chapman, aka Johnny Appleseed, established a nursery and while he’s famous for planting apples, not many know the kind of apples he planted were called “spitters”. They were so called because of their extreme tartness, even bitter taste to some. Colonial America was founded on cider; it’s what people drank in copious quantities and the best apples for cider are tart apples with some sweet apples to offset the tart flavor. IOW, spitters.

Some believe Grimes Golden to be one of the parents of Golden Delicious and is a small to medium sized apple with clean yellow skin when ripe. Sometimes it has russet spots and the apple has a spicy, sweet flavor with a crisp, tender flesh. It’s a good all-purpose apple, used for apple sauce, apple butter, fried apples and cider. Grimes Golden is an excellent pollinator, also known as “self-fertile” and the fruit ripesn in late September and over winters quite well.

Golden Delicious, also known as Yellow Delicious, is another West Virginia apple. It was found on the Anderson Mullins Farm in Clay County in 1912 and it’s widely accepted that it’s from a Grimes Golden pollinated by an unknown pollen parent. One source says the Golden Reinette. Mr. Mullins sold the tree to Stark Brothers Nursery in 1914 for $5,000 to Stark Brothers Nursery and Stark Brothers immediately put up a steel cage around the tree to prevent folks from stealing scionwood for propagation.

Like it’s offspring, Golden Delicious is self-fertile and an excellent pollinator. It has multiple blooming periods and the fruit ripes in September but is not a good keeper. It bruises easily, does not store well and is best eaten in hand. Contrary to popular belief, is kin to Red Delicious in name only. Since 1955, Golden Delicious is the official state fruit of West Virginia and since 1972, the Clay County Golden Delicious Festival has been drawing crowds.

The Rusty Coat may also be the Sweet Rusty Coat and is an old Southern apple with a nutty, sweet flavor. The fruit has a very dark yellow skin with red striping and russet coat combination. The man who sold me the apple trees has a box of Rusty Coat’s he’d overwintered and the fruit still looked firm albeit going to soft. But, after six or seven months in storage the fruit was remarkable in both looks and flavor. Rusty Coat ripens September October and is good for drying and desserts.

Both my trees are semi-dwarf three year old trees and should reach fifteen to twenty feet at maturity and should begin to bear fruit within two, certainly three, years. Good news, certainly, as I enjoy baking pies, making cider, apple sauce, drying apples and eating out of hand. My brother makes excellent cider using as many as half dozen varieties. His cider keeps well and I’ve some in the refrigerator that has a nice twang as well as a probable high alcoholic content. It should, it’s been in storage for more than a year -smile-.