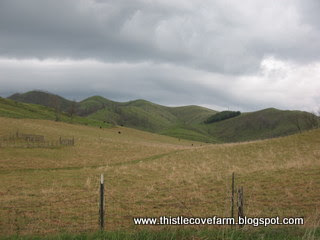 It’s been a day, several actually, but there’s no way to catch up, only to say a few words before getting back into harness and tracks. Boscoe, our little studless muffin back porch cat hurt himself. God, and Boscoe, only know how or when. His front left paw is injured, the nail pulled ??? torn ???? Anyway, it’s gone. I bundled him up for a trip to Dr. Anne but forgot the camera so all you’ve got is my word for it.

At Dr. Anne’s office, we bundled Boscoe into a “Cat Sack” so she could examine him closely without the two of us being torn into. That Cat Sack is a nifty thing and I’ve ordered one. The cat is stuffed into the sack and it zips up, complete with a little muzzle, and velcro on either side allow a front leg to poke out. The top zipper zips both forward and backward so rear legs can poke out…which leg is needed. Poor Ole Boscoe, he was a comical sight although his attitude said there was nothing funny about it!

Upon examination she confirmed my diagnosis…claw gone, infection set in, swelling, pus…the whole nine yards. She gave him a pain shot, upon my request because I figure why should he be in pain, and then cleaned him up. She stuffed antibiotics down his throat and we loaded him in the carrier to bring him home.

Ahem. We also loaded a little orange and white “dreamcicle” female cat to bring home. Someone brought her to Dr. Anne’s office and after being spayed, vaccinated and vetted upon, she’s ready for a new home. She’s somewhere north of five years and south of ten years but she’s no spring chicken plus she’s small for her age. She’s a bony little thing too but I’ve already started fattening her up. She’s been called Honey but that’s just not her name. I think it’s either Ginger or Ginny but Dave’s not sure. So, we wait until she tells us her name; sometimes that can be a day or two, sometimes a week or two. Patience, patience. Whoever she is, she’s a good fit with the household…not afraid of anyone, human nor animal and willing to hold her own. In time, she’ll provide to be a good companion to all. 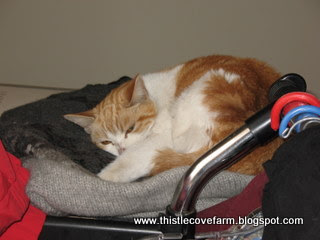 When Dave got Boscoe home, he was turned loose. We figured he’d be here this morning for breakfast. It took some time and a lot of calling but he finally showed up and now he’s locked in the front parlor with cream, water, food, litter box and snuggly bed. He’s staying inside until he finishes his meds and I’m sure he’s healed nicely. If I could have gotten my hands on him last night, I would have given him another dost of antibiotics just to jump start him.

Here’s Boscie, licking his chops after having cream. He’s a funny little feller, doesn’t want the nice comfy, snuggly bed fixed for him. He wants a nice, quiet, dark corner. 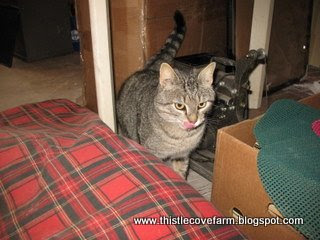 We saw snow flakes this morning, high howling winds that threatened to steal the breath from my throat. I set out hay this morning, the horses have pasture, somewhat, but it’s not growing in as well as it will be this time next month and they are hungry. My attitude is if they waste a small bit of hay while they are eating to keep warm, that’s okay too.

It’s too early for Blackberry Winter, that’s generally around the tenth of May. I’ve checked the Almanac and there’s nothing on for today but it’s sure strange weather. The wind threatens to tear the windows from the frames, the studio is rattling, the studio bell is clanging. It’s a harsh day, frightening in it’s intensity. It’s Earth Day although I’m sure Mother Earth laughs at the idea. Isn’t everyday Earth Day? For God, for whom a days is as a thousand years and a thousand years as a day…isn’t every day “earth day”? It’s His creation and, until man and woman stumbled and fell, God was doing a grand job of things. For sure, He loves us a lot.

Blustery cold and snowy day
April’s not laying down for May
Wind screams down the chimney to toss curtains aside
Giving rise to the thought of ghoasties and goblins
In the dark, dark ideas arise but banished in the light.
I stand at the window, hoping, hoping for calm
outside, Wind howls, tugs my hair
Wind laughs at my hat and hurls sunshine into heaven
The animals are panicked, horses running on air
Sheep crowded on a hillside
bustling each other for green along the fence
None wanting nor willing to be on the outside line.
Cats huddled in the barn, curled into hay
Cats huddled in chairs, curled into cushions
Dogs at my feet.
We all hunker down, waiting out the storm.