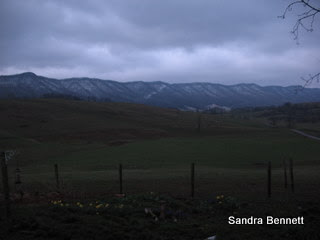 It’s been a week! We’ve had a bit of snow, a lot of rain and the sun was able to break through the clouds once or twice but never for very long.

This photo taken off the back porch, looking toward the upper pasture and Morris Knob in the distance. The Knob is the tallest mountain in our county and stands about 3400 feet; our house is about 2400 feet. Just over the rooftop you can see specks…those specks are my horses and six of the eight are taking a lie-down. It may be unusual for horses to take a lie-down all together but it’s rather usual for mine. They enjoy warm, sunny days and know how to take advantage of them. 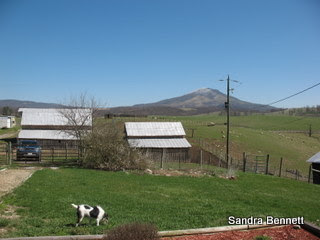 The zoom is used here so you can see, left to right, Izzabella, Tumbleweed, Bo, Dani Girl, HayJ and Lightly. The other two, Peaches and Dandy Man are walking the fenceline, to the right. Dandy Man is Peaches’ shadow until I go to the pasture and then he’ll run to me for pets and kisses. What sweet horses, all! 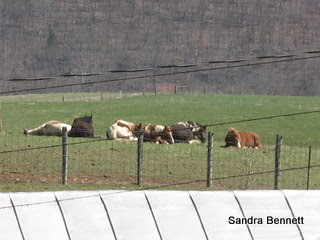 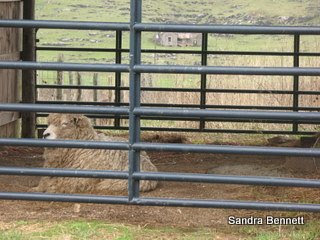 I’m gearing down, Sheep Shearing is Saturday and I’m almost ready. Every year I fret over weather…why, I do NOT know other than that’s the only thing I can do is fret. Yes, I do pray but when I forget, I fall back into fretting. Saturday is supposed to be hot, 70F or thereabouts, and sunny…hurrah! But today the sheep are in barn prison and not atall happy about it. Zach has his own cell, off and separate from the others as they were about to wool him to death. I found him cast on his side, feet and legs pumping mightily in his struggle to right himself as his flock mates bumped into him mercilessly.

Poor dear! I moved him to another shelter and he looked so grateful, as if to say, “thanks, Mom, thought I was a goner there for a while!” Sheep, like most animals, are herd or flock animals. They prefer being with their own kind but will accept the companionship of other animals should their own kind not be available. Zach seems to enjoy being by himself; he gets pets, kisses and love daily, cracked corn and sweet alfalfa to eat and I carry him fresh water twice a day. He seems quite happy and I’m sure he feels much safer!

The animals enjoy sunny days but the sheep suffer due to their heavy wool coats. Even though there’s snow on the mountains, they still struggle when the temps get much above 70 F. 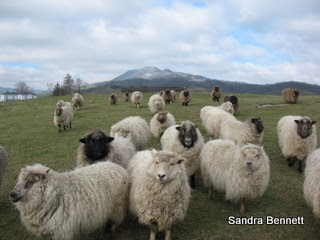 Yesterday there was a cow break; about 40 yearlings got loose and decided to look for greener pastures. Abbie and I had gone down the road and were able to help get them back in their, correct, pasture. 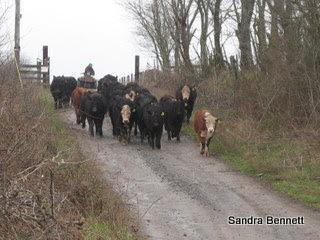 We’re the first farm on Cove Road which dead-ends at Ward’s Cove. The head of the Cove, in recent years, was owned by Smiley Ratliff, now deceased. At one time, he was on the cover of Time Magazine and made his multimillions in strip coal mining. Strip coal mining has a lot of controversy surrounding it and I don’t claim to know the particulars. One thing I do know is, a lot of folks have bread on the table due to paychecks from those mining companies and a lot of non-profits have benefited as well. Just last year, the local community college was given $150K by the Ratliff Foundation.

Smiley was one of the first to welcome us to the Cove and invite us to his house. For that, we’ll always be grateful. He was a character, a legend in southwest Virginia but also a WWII and Korean war hero, bank founder and, at one time, was the largest land owner east of the Mississippi. He tried to buy Henderson Island, off the New Zealand coast, which you’ve, likely, never heard of but the name Pitcairn should ring a bell. Henderson is one of the three with the other two being Pitcairn and Mangareva Islands. First he attempted to buy, then lease, and word has it around here the Queen eventually nixed the idea. She was in good company because Captain Paul Watson thought the idea rather dreadful as well.

Smiley was a well-rounded, self-made man who had, what to me were, confusing ideas about Christianity. We talked about religion and he, just as I, held strong opinions on what was required for a person to go to heaven. I found Smiley to be a gentlemen and though we never agreed on that topic it didn’t stop us from having other interesting conversations. 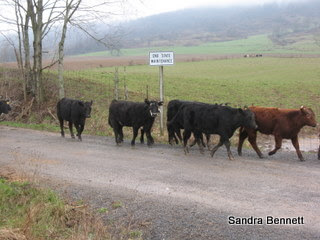 The sign says, “end state maintenance” and, sometimes, even our road doesn’t get scraped in the winter. It all depends upon how much snow and how stretched the DOT employees. After all, thee are only two, maybe three, houses where folks live full time. In all, there are less than six people living on Cove Road.