Clinton Bell, is shearing one of my Shetland sheep while, in the background, the crowd watches in terror. My sheep are tame, pets all but still aren’t crazy about being tipped on their rears in public. They would actually rather lead quiet lives where they only have to see me, preferably with treats of corn or alfalfa. Clinton also de-worms them, gives them their rabies vaccination and, if necessary trims feet. He usually only has to trim feet on a couple of sheep. Clinton says the less stress a sheep has, the less their feet need trimming. One thing my sheep are NOT is stressed! Except on Sheep Shearing Day and then they stand around, stomping their little feet at everyone. Sheep have no defenses except flight and, with pounds and pounds of wool, they aren’t all that fast so they stomp their little feet. It’s kinda cute to see them angry. 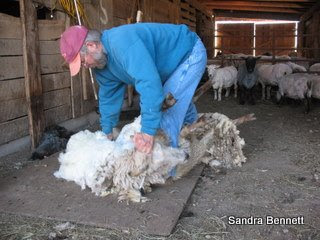 I wonder if that’s what it’s like with God when He sees us get angry. We stomp our little feet, throw our little tantrums and, basically, can’t do much about anything. Except we don’t know that or have yet to come to grips with it. About the only thing we’re in control of is ourselves and, sometimes, spill the milk with our attitudes.

Anyway, until each sheep was sheared, they would stand around, stomping their little feet and snorting. Poor little dears. They were sheared anyway and felt all the better for it but just wouldn’t think it so beforehand.

Daniel Miller, our catcher, is a soft spoken man with a wry sense of humor. He told me earlier today, he slept on the floor last night and woke up stiff as a board today. Shearing and catching is Very Hard Work and I’m indebted to both men for the great job they did. Daniel wears gloves because his hands get very sore when he’s catching sheep all day. It’s better than being at a rodeo because there’s generally no injury in shearing but there’s still a lot of ‘rassling, tugging and struggling on the part of the men. Some of the sheep weigh more than, a lot more actually, two hundred pounds and Daniel simply has to manhandle them to get them to the shearing floor; they don’t go willing, no not one. 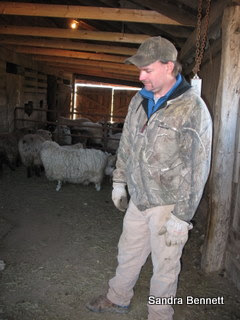 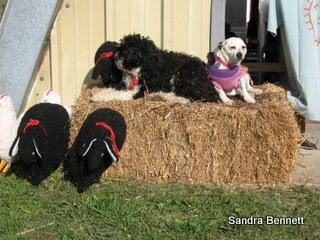 Some person, perhaps in desperate circumstances or that’s what I want to think, dropped these two beautiful dogs up the road. Friday afternoon, I picked them up, brought them home and fed them. They spent the night in the farm office bathroom, with water and heat, and Saturday spent the morning charming all who saw them. The little black and white smooth coated dog was shivering so I let her borrow one of Abigail’s sweaters. Apparently, she loved the sweater and both dogs curled up on the straw bale, close to where they could smell ham biscuits.

At day’s end, they went home to live with Fran and she’ll spoil them just like they should be spoiled. Happy, happy dogs.

Today is, in a word, beautiful! The temps are in the high 60’s, a gentle breeze and the sun to
warm old bones. The sheep are nekkid and happy. My sweet Zacheous is having himself a fine
time and a Big Day. He’s not carrying around a weighty fleece, his nails are trimmed, he’s had his
rabies shot and de-wormer and all’s right with his little world. He’s traveled far today, all the
way to the far end of the hillside pasture and is right pleased with himself. It’s been a long, long while since he was able to travel so far. Most of the winter he’s been kept in the barn with his mates, Buster Brown and Thomas, both of whom are now gone to the Great Shepherd. Zach has surprised me with how well he’s done. Yesterday, he wasn’t all that pleased with being sheared; he’s terribly arthritic and it hurt his old bones to be turned on his arse. After he was sheared, he stumbled around, fell a few times, struggled to his feet but, finally and fortunately, made his way upright and then stayed there. I fed him some cracked corn and that gave him some strength to carry on. Today, his little world was turned upside down when he ventured to parts not seen in months and months. 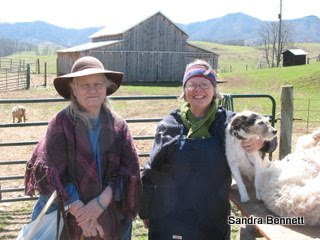 Blogland has brought many wonderful people into my life; this is June and, with her daughter, came from North Carolina. She’s a talented woman and weaves, knits, quilts, long arm quilts and loves Traditional Japanese music. She’s the only person I’ve ever known who loves this music; she also loves Celtic and classical but that’s not nearly so esoteric as Traditional Japanese. Thanks for coming, June; loved meeting you, and Kathleen, in person!

Lura is also from NC and a friend of many years. She’s a talented woman whose latest interest is making looms. She’s doing a great job and soon I’ll photo her two of her looms and post here. 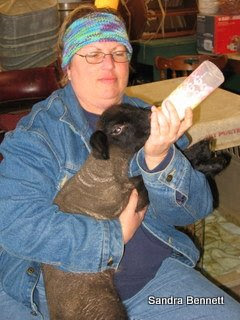 Mary gives one of the Suffolk lambs his last bottle of the afternoon. The lambs were a huge hit and loved the attention…especially the bottles of lamb milk. 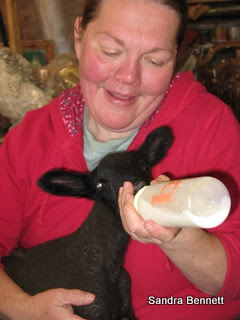 Leslie Shelor, Fiber Friend of long standing. We’ve known each other many years and it was fiber, fleece, and all things textile that brought us together. My life has been greatly enriched by her friendship and I’m blessed by her friendship. Having said all that, this is the first time we’ve ever had our photo taken together! I suppose we’re always too buy “doing” that we don’t stop to think “photo”. That’s now been remedied and I’ll enjoy this memory for a very long time.

Leslie always wears dresses or skirts, never pants and I “usually” wear dresses or skirts. Come Sheep Shearing Day though, I wear pants as I’m not partial to showing J. Q. Public the color of my undies. Trust me, the way I twist and turn to pick up fleeces, something is going to show so I want it well covered with pants on this day. I wear aprons a lot as they are So Handy. All those pockets plus keep my clothes clean. Grandmother Bennett was on to a good thing when she wore aprons all her life. Just wish she hadn’t worn them out so I could have a bit of Apron Memory. 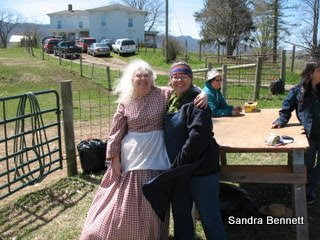 Gaynell D., Quilt Maker Friend, was caught unawares. She, like most of us, hates having her photo taken but I wanted to show her with her beautiful quilts. 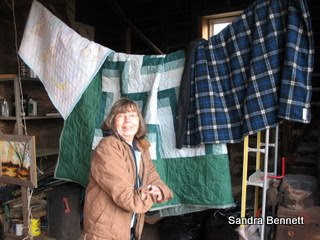 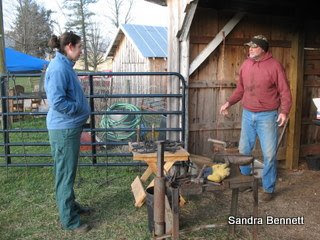 Mary M., yes the same Mary feeding the lamb, is Shearing Day Resident Basket Maker and her work is excellent. You can see her work more closely at Lost Arts Guild and I’m hoping, apparently against hope -smile-, she’ll soon start her own blog! 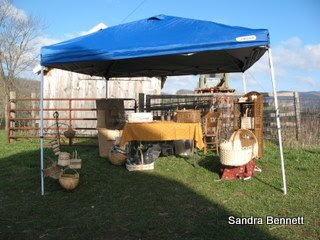 Birds of the air make their nests all over the world but here, at Thistle Cove Farm, they use wool to line their nests. The cow skull is a good place to stick some fleece for the birds to gather. It amuses me to see the skull even useful in death. Bluebirds are nesting a hundred feet, or so, from this skull. Perhaps they will use some of this wool? I hope so! 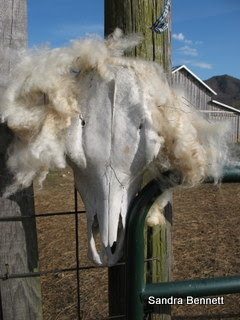