This is the molasses, yes, it is homemade, in the enamel saucepan on stove top. I think enamel makes for a better end product and I know for sure it’s easier to clean! 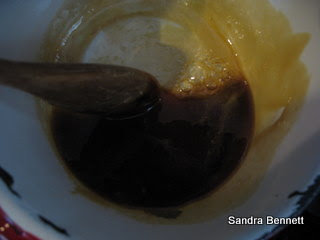 I learned how to cook and bake by watching the women in my family. From the time I was old enough to eat, I was old enough, almost, to watch Mom, Grandmothers, Aunts in the kitchen, at either the stove or sink. Grandmother didn’t have an icebox but had a cellar and spring house where foods were place to be kept cool. Aunt Bonnie had an icebox, later a refrigerator, but still had a cellar. We’ve also got a cellar but needs clearing out, a hot day job, so I can begin storing food again. Dave wants to put wine there as well and that’s a good idea as it’s always cool but never freezes.

Daddy’s Mother, Hattie Gay Hamrick Bennett, was born in the 1800’s and all of her life, used a wood cook stove. I well remember the time when she got the wall mounted, old fashioned telephone hung as well as remember Daddy holding me up so I could put the ear piece to my ear while he talked into the mouth piece. Ummm…you do know these were two separate pieces, right? -smile- Her ring, three long and a short, let the other folks on the party line know who was being called. Everyone kept up with everyone else’s business because they would all run to the phone and listen in to the conversation. One soon learned not to put anything Very Personal over the phone line!

It’s just been since we’ve lived at Thistle Cove Farm that Aunt Esther has gotten a private line. As recently as the late 1990’s, she had a party line and, same as above, folks would rush to listen in whenever the phone rang, no matter for whom it rung. -that makes me smile so I’ll leave it written that way-

This is the molasses, with a pinch of baking sody, aka baking soda, to be stirred in and made a part of the whole. 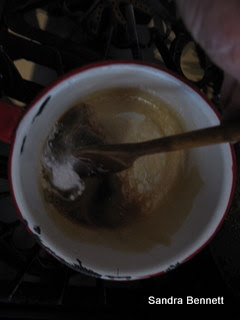 The sody and ‘lasses are beginning to fizz. 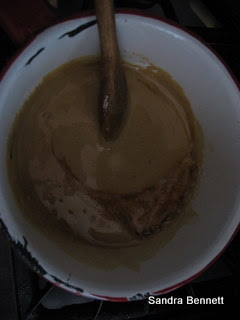 Anyway, at a tender age, I was allowed to help bring her kindling, wipe and set the table; all chores designed for young hands. Truth be told I was probably more in the way than much of a help but, at the time, I was in my element. Our womenfolk have always tended to home, hearth and family, have made a life for themselves taking care of husbands, children, spinster sisters, wayward brothers and anyone else who wandered across their path and needed a resting place.

It was Grandmother Hattie Gay who influenced me the most in my biscuit making. To this day, I make cat head biscuits, the old fashioned way, without a recipe. As a matter of fact, that’s what we’re having for lunch today – cat head biscuits, thick sliced black pepper fat bacon, macaroni salad, milk, water, coffee. My 1914 Acron stove works well for her age but the tops of my biscuits don’t brown as nicely as the bottoms. I’ve not noticed the flavor is affected though and no one else has complained so I must, still, be doing something right.

According to Joy of Baking, flour was once spelled flower and dates to a time when mortar and pestle were used. Some folks still hand grind their own flour but I buy mine in bulk. 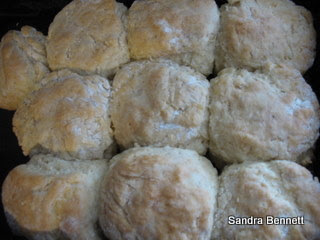 As best I can, here’s the receipe. Make sure your flour is fresh, as fresh as can be. I use baker’s flour but perhaps you have your own favorite brand.

2 tsp. baking powder, more or less, generally I use more becaise I never measure my flour so always end up having to use a little bit more of everything to even it all out

4 tablespoons butter, shortening or corn oil -not vegetable oil though, always use Real

about 3/4 cup whole buttermilk. Please. Not the low or no fat stuff!

I don’t sift although some say it makes for a lighter product. Well, okay. I do sift using my fingers but not a sifter. I figure why dirty up something else?

Cut in shortening or butter using hands or fork, doesn’t matter. I always use a fork so I can spear some of the worked dough for a taste sampler. Love cookie dough as well -smile.

Add buttermilk gradually, stirring until soft dough is formed. Turn out on lightly floured board and lightly form into circle, just enough to shape.

Cut out with 2 inch floured biscuit cutter, I use a tin can, cut out both ends, that used to hold something but I can’t remember.

Bake in a greased metal pan in a 400 degree oven for 12-15 minutes or until done. I cook by sight and my old 1914 Acorn stove is a bit cranky so it, usually, takes a lot longer for me.

Makes 6 biscuits if you’ve done it right plus a little left over for sprinkling with cinammon and sugar or snacking…the dogs and I like raw dough.

I serve with real butter, sometimes home churned butter, sometimes churned butter from another woman who churns. Also on the table hot ‘lasses whipped up with a pinch of sody, as told above, or home made jam – strawberry, cherry, blackberry or, my personal favorite, blueberry and damson conserve. Most always, there’s a goodly serving of peppered thick sliced bacon on the side…what’s breakfast without a little pork fat, eh? And, yes, for those inquiring minds…as a matter of fact, I do butter my biscuits before pouring the hot ‘lasses over them. It’s okay though, it’s not like I eat like this but once every so often.

That’s about it, try it and let me know how you like it or give me your favorite biscuit recipe. Let’s face it, even poorly cooked or baked food, served with lots of love taste better than fast food thrown over a counter. But when good food is cooked or baked with love…that’s amore! 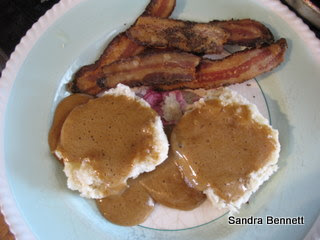