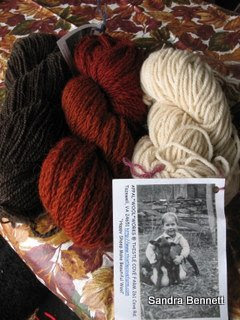 The two hand dyed skeins of yarn are farm spun while the naturally colored yarn is mill spun. I bought the naturally colored yarn from someone, now retired, in Pocahontas County, WV. As you may know, that’s the home of Pearl S. Buck, 1932 Pulitzer Prize winner and 1938 Nobel Prize winner for her book The Good Earth. The Stulting Family, in 1847, immigrated from Holland to Greenbrier County and later to Hillsboro, Pocahontas County, WV where Mrs. Buck was born Pearl Comfort Stulting in 1892. When she was three months old, her missionary father moved the family to the mission field in China, and subsequently, English was her second language, taught to her by her mother and tutor.

The Boxer Rebellion split the family apart and women and children were sent to the, relative, safety of Shanghai where they lived for almost a year. Eventually, she would attend Randolph Macon Women’s College, here in Lynchburg, VA, to earn her degree, Phi Beta Kapa, in 1914.

As a side note, in 2006 Randy-Mac, as it’s fondly known, began accepting males and the next year formally changed its name to Randolph College.

Back to Mrs. Buck. I can vaguely remember dissension in our WV family regarding Mrs. Buck. I was never sure what the problem was because grown-ups shut up when ‘little pitchers with big ears’ were around. I’ve since researched and found out, essentially, the dissension was, as put by liberal Presbyterian Harry Emerson Fosdick, “Shall the Fundamentalists Win?”

Sigh. It’s this kind of controversy that, in my belief, ole Lucifer just loves to stir the kettle. When we Christians are arguing over theology, it takes our eyes of the primary prize…Jesus Christ. If we could but keep our eyes on the prize, stay the course we would ALL be rewarded with eternity in heaven. But, no, we must argue, fuss and fight over who has the right to say what’s right and what’s wrong. Sheesh. I thought God had already decided all that and it’s up to us to “work out your salvation with fear and trembling” as it’s written in Phillipians 2:12.

Anyway, Mrs. Buck’s views became highly controversial in the Fundamentalist-Modernist Controversy and she had to resign as a missionary. Her life is fascinating, full of twists and turns; she was a very public figure and worth a deeper look.

All that to say, the naturally colored yarn is 50% Cheviot wool 50% silk with the wool coming from Pocahontas County, birthplace of Mrs. Buck, and being spun with Chinese produced silk, in China, in the Jiangsu Province where Mrs. Buck once lived. That has a circularity that’s rather comforting, I think, and I mean no pun on Mrs. Buck’s middle name.

This skein is all I’ve left and the hang tag is a 1934 photo of Daddy when he was seven years old. He’s kneeling, arms wrapped around twin black lambs and beaming at the camera. Look closely and you’ll see the stacked rock fence in the background. Daddy was the youngest boy of thirteen children and most beloved of his oldest brother and sister. As to the skein of yarn, I’ve yet to decide whether to hand dye this skein or even what I’ll make. I do like to hold it and think about the history of what it represents, the people who have had a hand, so to speak, in the making of it; the two countries that have produced it. To me, it represents history both in the past and in the making; probably in the future as well.