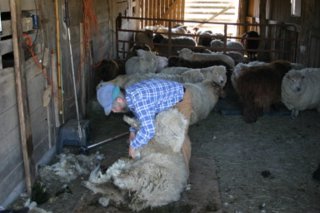 An annual rite of spring is Sheep Shearing Day @ Thistle Cove Farm. Every third Saturday in April, our rare breed flock of Shetland, Romney, Merino and cross bred sheep are shorn of their woolen fleeces.

Friday night, prior to dark, I’ll put the sheep into a “short lot”, or, in the possibility of rain, into the barn. They won’t be allowed food or water from Friday night until after they are shorn. It’s not to their liking but it’s to their benefit. Just think of you having surgery…same principle applies…you’re much more comfortable if you’ve not had food or beverage prior and you’re safer as well. Thus it is for the sheep. Although…if you ask them, they will tell you of their trials and tribulations in being deprived of nourishment for even those few hours. Most sheep sleep at night…right? Not my darlings. They will bed down at dark but if they hear my voice or even my car drive onto the farm…UP they will jump and madly begin bleating at me. FOOD, FOOD, FOOD…we NEED food!

Listen up guys and ewes…it’s DARK and every other sheep in the valley is asleep. Go thou and do likewise.

The sheep enjoy being relieved of their winter coats but are sorely angered at the rudeness with which they are shorn. There is a process to the madness of shearing which begins with the sheep being locked up, as mentioned above. The next morning, James arrives and he’ll catch sheep for the shearer. James will actually go into the lot where the sheep are located, choose one and then catch it with his right hand on the sheep’s rump and James’ left hand in the sheep’s mouth. James will be careful to place his hand *behind* the sheep’s teeth, toward the back of the jaw. He’ll avoid being bitten and it’s much easier, safer and gentler to guide the sheep in this manner.

As James guides the sheep to the shearer, he’ll, gently, bend the sheep in a semi-circle shape and, at the same time, push the sheep’s rump to the floor. The sheep can then be rolled and stood up on its rump in perfect position for Clinton to shear.

Clinton Bell, our neighbor and shearer, has been shearing sheep for more than four decades and is more than capable. He wears soft New Zealand leather booties that have seen years of use and are “lathered” on the bottom with years of lanolin. The lanolin helps Clinton grip the floor with his feet and grip the sheep with his legs and helps keep both shearer and sheep safe. It takes Clinton perhaps three or four minutes to shear a sheep using his electric blades. Some shearer’s use hand blades which leaves a coat of, maybe, two to three inches on the sheep. With electric blades each sheep is shorn to the skin.

Once the sheep is shorn, s/he is released to the next lot where, invariably, the end up fighting because they don’t recognize each other. How funny! Leslie Shelor of Greenberry House will be on hand to help wtih skirting and then she’ll assist with spinning and fiber arts demonstration. For those who don’t know…skirting means cleaning the raw, right off the sheep fleece of tags such as manure, urine and unwanted vegetable matter (VM) such as burdock. I try to keep clean pastures so there’s little VM to pick out. It’s easier to keep a clean pasture so the sheep will have clean fleeces than it is to clean the fleece.

I like to shear late in the year so the sheep are not discomforted by cold weather. Most folks like to shear in early winter so the ewe’s are more comfortable for lambing and the lambs can find their mother’s teats quickly and easily. In cold weather, it’s imperative a lamb find the teat so they can nurse that precious colostrum and be warmed by the milk. I didn’t put a ram in with my ewes last fall so there aren’t any spring lambs this year. It saddens me greatly but unless and until I can sell a horse or two, I refuse to have more mouths to feed. Why add to the burden? My sheep do not go to to the market nor do they don’t have to worry about being the star guest at any mealtime. All my sheep have to do is grow excellent quality wool fleeces and let me love on them; an easy, and safe, life compared to most other sheep.

For those of you who may know such things…no, my Shetlands don’t blow their coats or, at least, they have yet to do so. A Shetland is a primitive breed and are from the Shetland Isles of Scotland. During late winter/early spring, Shetlands will roo or blow their coats. For whatever reason, mine don’t roo. I think it’s because they have little to no stress in their lives, received the best free choice minerals available for purchase, eat fresh pasture and hay grown on our farm and drink mountain spring water from an underground source that surfaces on our farm. My sheep, it saddens me to say, have a life seventy percent of the world’s population would envy. That’s a sad commentary on humanity, isn’t it?

Sheep are completely and totally domesticated animals and have been for thousands and thousands of years. Without humans to tend to and care for them, they would, in large part if not all part, eventually die out.

We start shearing whenever Clinton gets here and that’s somewhere between 9:00 and 10:00 a.m. We’re on farm time and sometimes interruptions prevent us from doing what was planned when we planned it. That’s okay. The sheep have to be shorn and they will be…eventually. When the sheep are nekkid, Clinton packs up his tools and goes back to his farm.

Lost Arts Guild members will be on hand to demonstrate traditional mountain crafts such as spinning, making 4-string mountain dulcimers or brooms from broom straw. We might even have a woodworker or farrier or fillet crochet artist. We never really know but just go with whatever happens. It’s a good day albeit a working day on the farm and our first priority is to shear sheep.

Please see our website, Thistle Cove Farm, for directions and, if you’re driving a distance, please call Friday night to make sure we’re still a go. We can never predict an emergency or a change of plans but we’ll try and keep you up to date. It’s a great day on the farm, full of photo opportunities. Bring a lunch and enjoy our picnic tables.

Also, we’re collection donations for the Komi Kids Yarn Project so bring a few dollars for that. There’s no charge for parking and I ask you to park on the road to keep the farm lane clear for workers.

Thistle Cove Farm – where it’s beautiful one day and perfect the next!