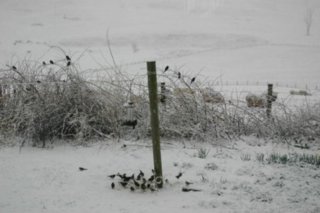 ch has been determined to go out like a lion. As you can see from the photo at left, March has pretty well succeeded. In the background some of the Thistle Cove Farm woolies can be seen as they graze the pasture adjacent to the house.

I like keeping seed for the birds but Dave tells me if avian influenza comes to our area, bird feeding will cease. I’ve read the pros and cons about “bird flu” and some say it probably won’t happen while others say people will die by the millions.

Frankly I don’t know whom to believe but just like Y2K, I’m prepared. The worst that happened with Y2K was people laughed at me for being prepared….all the while munching lovely home made bread, eating wonderful soup canned straight from the garden and drinking coffee we had put by in a half dozen containers.

Yep, when we’ve had major power outages around here, we’ve been able to make sure some folks had a little care basket with life’s necessities – coffee (instant because they didn’t have a working cook stove), cookies, bread and the like. Whether it was because my folks grew up during the depression or because they were Appalachian, or both, we’ve always tried to be prepared. It’s a good thing no matter if a person lives in rural or urban America…maybe especially urban areas. If we’re caught in a major crises in this Country, rural folks can always go out and shoot wild game. 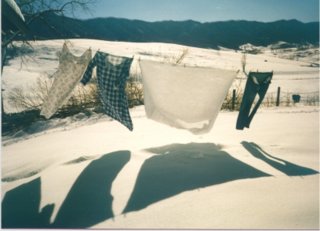 I enjoy hanging clothes on the line, as long as it’s a sunny and/or windy day. At times, however, I slip up and my clothes are still hanging on the line during a snow storm. The clothes hanging on the line here are not merely hanging…they are frozen stiff. It looks like the wind is blowing and it is…a little bit…but the majority of that stiffness is from being frozen. I thought it made a great photo and keep it around to remind me to not take life so seriously.

For the past few weeks I’ve been laid up with a recurring back injury which has resulted in being partially paralyzed in my left leg, walking with a stick and dragging my leg. The chiropractor has put me, more or less, to rights again and I’m in much less pain and able to stay out of bed for longer periods of time. Right now though, I’m so far behind in my chores and duties and I’m beginning to wonder if I’ll ever get caught up. I’ve got a couple of orders that need to be boxed up and mailed; I was supposed to go to Leslie’s this Friday past for a dye day but Ole Man Winter took care of all those plans. On Saturday, I was supposed to go to Blacksburg for a knitting sock making class; Ole Man Winter stopped those plans as well. Today, it’s still snowing, sleeting and there’s a sheet of ice on everything. It takes me longer to do my chores but the Workhorse makes it easier. Like one of the farriers tells me, “that’s a right sexy little golf cart you’ve got there Missy”. I tell him it’s not a golf cart but he enjoys teasing me so we’re caught up in playing this yes, it is and no, it isn’t game. I think I’ve gotten the last word though…I’ve never seen a golf cart with rear wheel differential and a hydraulic six cubic foot bed on back. And, even if I don’t, he’s a cutie and I enjoy our bantering. 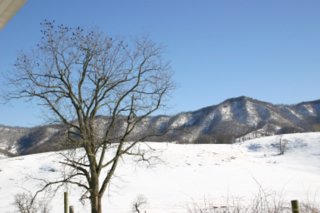 God’s blessings on you, yours and the work of your hands.