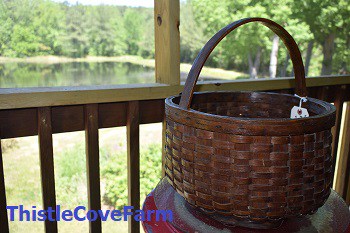 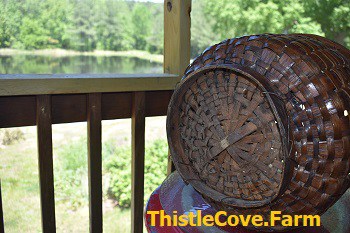 As Dave once said, “Goofing off is no fun unless there’s something else I should be doing.” What I should be doing is writing checks, paying bills, stamping envelopes yet here I sit, typing. After the house flood, Mom and Daddy are again sitting in their own chairs, sleeping in their own beds and unpacking boxes galore. The sibs and I are helping but, truth be told, it’s Beloved Sistah who is helping most. One of the times I was there, Mom picked up the above basket and said, “This belonged to Grandmother Bennett and she kept her homemade lye soap in it. Do you want it?”

Yes, please. It no longer holds Grandmother’s lye soap but it holds lye soap from a variety of sources. Years ago, I made lye soap and ever since it’s the only soap I’ll use on my face. Dave and his sister used to get the most awful chilblains on their hands but once I convinced Dave to wash with homemade lye soap, his fingers stopped cracking open and bleeding in cold weather.

Grandmother’s basket was, most likely, made in the late 1800’s; perhaps Grandmother made it but there’s no way of knowing now. It’s still as sturdy as the day she put her first batch of soap in it and now holds my collection. When I travel, I buy useful items…lotions, toothpaste, handmade soap (difficult to find but I keep an eye out), clothing (scarves…lots and lots of scarves), shoes, jackets. I’m not keen on junk souvenirs (not even junque <g>) souvenirs which are soon lost or broken. 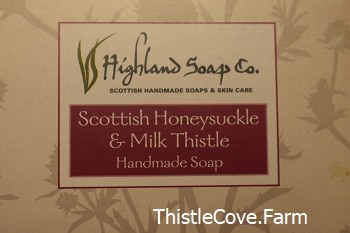 Last May, while in Scotland I stumbled across the Highland Soap Company and brought home ‘Scottish Honeysuckle & Milk Thistle’ soap. 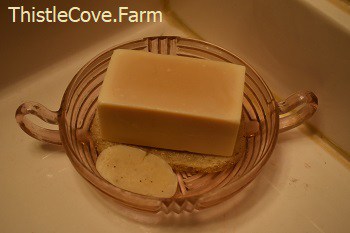 The soap dish is pink depression glass, a thrift store find for ninety-nine cents and used in the half bath (which gets the most use in this household.) Originally, the dish was probably used for pickles or beets and the soap sliver is the last bit of my thistle soap. The large bar is patchouli from Michele at Toes in the Dirt blog in western Virginia. She farms at Honeysuckle Farm, using milk from her goats to make her lye soap. She has a variety of goods on her site and sells at farmers’ markets so both site and market are worth a visit. I’m a simple soul and am able to wax lyrical regarding soap and this patchouli bar is especially nice. It has a lovely scent, lathers well and is highly recommended! Also recommended is her blog where she gives hugely helpful advice, the most recent being how to start a garden for a newbie. Again, highly recommended!

One note…handmade soap does need to be kept out of water as it will melt. I found those little soap pads and they work well and can be tossed in the washing machine as well. 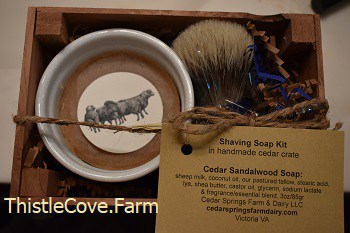 Located in the next county  from me is Cedar Springs Farm & Dairy where Suzanne makes soap using her sheep milk. Her husband made these cute little crates from cedar trees he felled on their farm and it contains sandalwood soap and a brush. Yes, it’s designed for a gentleman but as there’s not such in my life, I’ll use it instead <smile>. Suzanne gives soap making classes and it delighted me to take one where I made six bars of unscented shea butter soap; one bar was given to my sister and I’m still waiting on her comments but, almost daily, I walk by and pick up a bar simply to smell and remember. Suzanne makes charcoal soap (the only lye soap I used on my face) and I’ve an order in for a couple of bars. 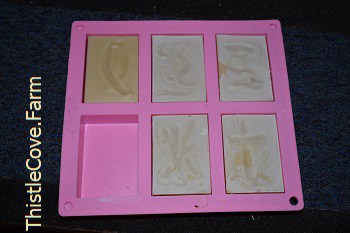 For years I’ve recommended handmade soap to folks, especially nice for folks with various skin problems. When properly made, cold process lye soap will not burn or even cause irritation and is the only soap I’ve used on my face for twenty-five years. I don’t know if the law has changed but it used to be the only product that could, legally, be labeled soap was that made with lye, water and fat which is why you see bars labeled “beauty bars”, etc. in stores. They aren’t truly soap. Either animal or plant fat may be used and the lye is sodium hydroxide or Red Devil Lye and water. One reason I stopped making soap was due to the difficulty in finding Red Devil Lye. A haz mat label had to be purchased, all thanks due to folks who were making illegal drugs…boo hiss!! I understand sodium hydroxide is back on the shelf and…oh yeah…let me add making soap to my list of things to do! <g>

What I’ll do instead is offer The Natural Soap Book as a giveaway; I’ve not used this book so no recommendation but it’s one I had on the shelf. If you’re interested in winning this book, leave a comment; from among comments, one will be randomly chosen but you’ll have to provide your own basket as Grandmother’s basket wants to stay with me.  Oh! and if you’ve a mind, once you make soap I’m happy to try a bar and review.

62Shares
This site uses cookies to ensure that you have best experience on this website. If you continue to use this site, I will assume that you are happy with it.OkayPrivacy Policy