Do you remember here, the first photo of The Malt Shovel? This is a close up of the sign because I found the metal spikes interesting. They’re to keep birds from perching and pooping, thus keeping clean up easier and patrons cleaner.

It took me a (long) while to figure out how to get around Edinburgh. In fact, it was only when Mags showed up and helped, it all became clearer (notice I didn’t say clear). Prior to flying to Edinburgh, I did a fair amount of research…I knew where I wanted to stay, where I wanted to go, how I wanted to travel but no clue where the hotel was placed in relation to the rest of the city. Also, no clue where I would eat; as I got hungry, I would look around and make a selection.

In 2017 I spent a delightful day in Edinburgh and vowed to return to spend more time both in Edinburgh and in Scotland. Exiting Waverley Train Station, one dogleg’s right and Perre is on the left. It’s an artisan filled jewelry shop where I purchased amethyst earrings both trips. (Thistle Cove Farm…purple…amethyst = no brainer, eh?)

Around the corner these steps lead to the next level. Edinburgh is built on seven hills, so it’s said, and I believe it. This city is not handicapped friendly…cobblestones, stairs at every turn…but it’s also an ancient city. My tee shirt says Edinburgh 976 and I believe it. It’s one of the most beautiful cities, at least the old part, I’ve ever visited but, truth be told, I can say that about much of Europe which is built of stone.

When one exits Waverley Train Station and dogleg’s left, The Scotsman Steps lead to North Bridge Street, The Scotsman Hotel, the former home of the Scotsman newspaper, and the Hilton, where I stayed. I chose the Hilton Carlton (across the street) because it was familiar and I received points…in fact, I now have enough airline points and hotel points to fly free and stay a few days free. But, now that I’ve gotten the lay of the land, so to speak, I’ll stay elsewhere.

Since 1899, the 104 steps (I walked down) have linked Waverley Station to North Bridge; each step is made of a beautifully colored different marble and for more photos and the rest of the story, click here. 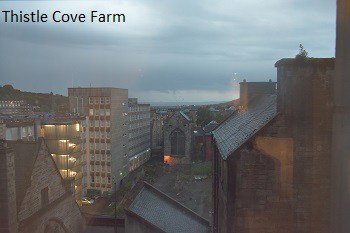 The view straight out my window, looking out toward the North Sea. 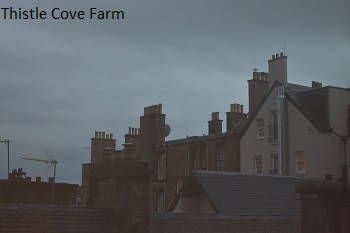 Chimney pots, looking toward right out of my window. Where the cranes are, lower left, is where we’ll be when we see the movie Tolkien tomorrow night! But I’m getting ahead of myself… 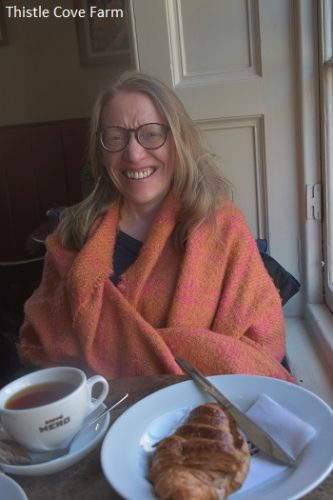 Mags, of Belfast, Ireland and Fraise Lachrymose blog arrived at 0:dark thirty early Saturday morning after Friday work and after visiting upon Edinburgh arrival, her blogger friend (I want to think her name is Pam) of In This Life. Pam blogged about Mags’ visit here.  I’ve been blessed thrice to meet and visit blog friends…two separate bloggers in Budapest, Hungry and Mags and her men in Belfast.

Anyway, breakfast was at Caffe Nero, a favorite spot of Mags and her men (husband and two boys) and it was delicious! Although, I have to admit eating at someplace called Caffe Nero gave me the willies (sure hope that doesn’t mean something naughty outside the USA). 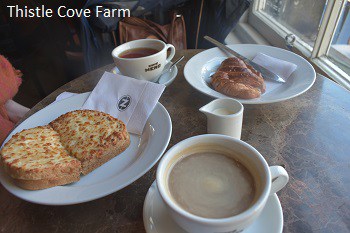 A hot breakfast…ham and cheese with American (as it’s called over there) coffee (meaning the way I drink coffee…coffee with lots of cream) and something hot (can’t remember) for Mags with black tea. Prior to eating, I said grace/blessed the food and, as I finished, a German (I think he was German) gentleman came to the table and said (paraphrased), “I noticed you blessed your food. It did me good to see you do that, thank you.” Well! Thank You, Sir! I always say grace/bless the food; it’s how I was raised and it’s how I live. I have nothing save those gifts coming from God. 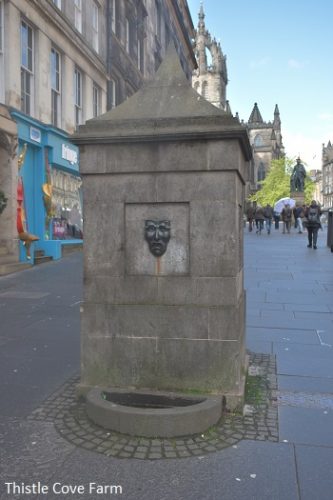 Edinburgh, at one time, was served with public water fountains; this is one on High Street, near Caffe Nero. 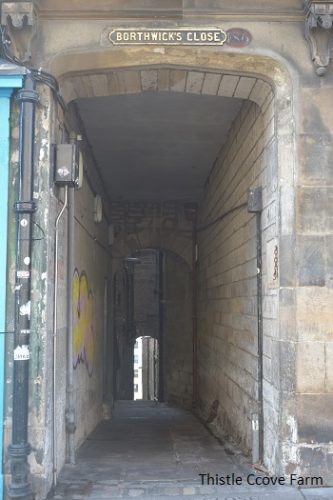 Alleys are called “close”; this is Borthwick’s Close off High Street. 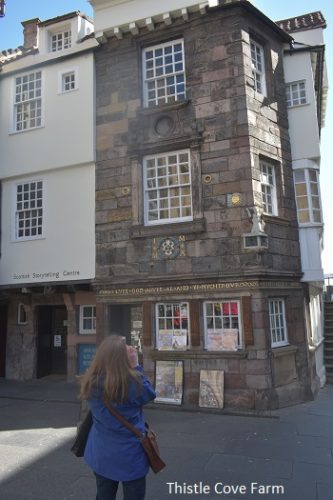 John Knox, born near Edinburgh in 1505, was a Scottish Reformer who was educated at University in St Andrews, later minister there, and key in ending Roman Catholicism in Scotland. His house in on High Street and I’m sure his heart would be broken knowing it now houses coven meetings; I know it broke my heart. Read Knox’s story here. 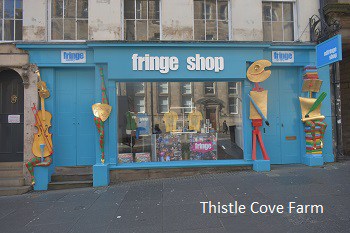 Charity shops of various names, or thrift stores, abound and I’ve found many treasures at some of them. In a later post, I’ll show you a watercolor I purchased, carefully brought home and had framed. 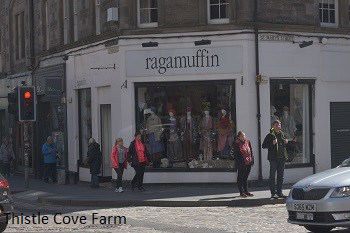 Ragamuffin is not a charity shop but it does have lovely, beautiful natural fiber clothing, etc. Mags and I did some damage there…in that we bought lovely, beautiful clothes. They also have a shop in the Isle of Skye which, hopefully, one day I’ll visit. 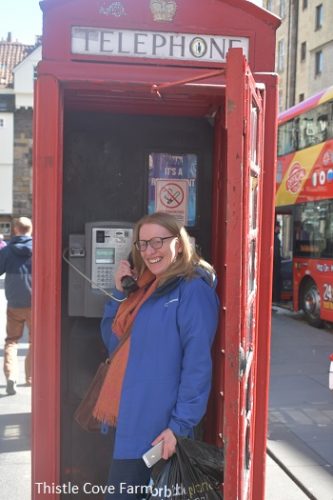 Ending with Mags phoning me to say, “Come back…come baaaaaaccccckkkkk!”

Thanks for visiting Thistle Cove Farm; apologies (again) for lateness…my 90+ year old Dad had hip replacement earlier this week and is now in rehab. Between the 90 minute, one way, daily drive and my computer crashing, it’s been a week. Weather has been beautiful…70’s and no humidity…thank you Jesus!

Please sign up to receive updates; there are about ten more days of photos, blogging, etc. Your e-mail will never be abused.