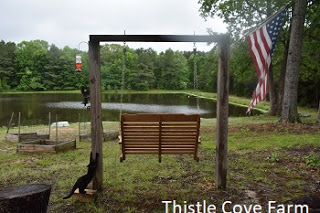 The previous owners left lots of goodies (and, yes, I have written them a thank you note!
Back to the swing…there are cushions but only to be used when sun is shining, although Tori and I did a test sit in that heavy downpour. Nearby Powhatan County has had more than nine inches of rain my brother in Amelia County has had 8 and I’m not sure of the amount I’ve had but know more is expected for the next week, at least.
Above, Inky, he of Pixie and the Inkspots, is seen stretching on the left side of the swing posts. The three raised beds have yet to be filled with either dirt, horse manure or vegetables/fruits. Last month was my introduction to Medicare and it seems it takes more and more time as well as more and more me to get everything done. I’ve yet to fish that pond or take the kayak or john boat for a ride but that’s due more to safety than anything else. My rule is if you’re in the boat or kayak, you must have on a life jacket and if I’m here with no other humans, I stay on terra firma. 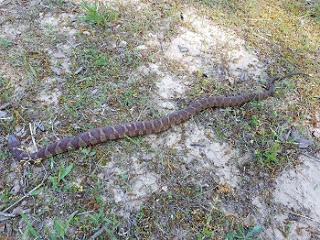 In our haste, that rule was broken a few days ago when Ronnie (doing some tractor and other farm work) saw movement on the pond. He knew a condition of fishing and hunting here was to kill muskrats, and when he saw the water break, he thought it was a muskrat and pumped that sucker full of 410 shot, got into the john boat (without a life jacket…neither of us was thinking clearly!) and I pushed him into the pond. He rowed to the spot, I ran for the camera and when I got back, Ronnie had this nasty brute stretched out on the ground. It’s a 2.5 foot copperhead that was still opening/closing his mouth so, using a square blade shovel, Ronnie cut off his head and threw it into the pond where fishes or turtles would eat it and the body thrown away. 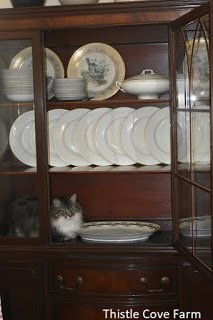 The dining room furniture was delivered…WOOHOO…and it looks fabulous! More photos later but wanted you to know even Gypsy approves as she found her spot on the lower shelf before the rest of the china was added. At least, the rest of it that’s unpacked; there are still a few dozen boxes of “stuff” in the basement and I’m hoping to find kitchen knives, rest of dishes and Lord only knows what else. John Robertson, owner East Coast Primitives, did a fabulous job and it’s nice to have available dishes, tea sets and other things that hold so many memories. (When he first arrived, John exclaimed, “You sure do like your solitude, don’t you?!” My response, “Yes, I like people in small numbers and from a great distance.” which is not surprising considering I am INTJ. (Dave was also INTJ and was in process of applying to MENSA, while I’m hard pressed to pass algebra. LOL) 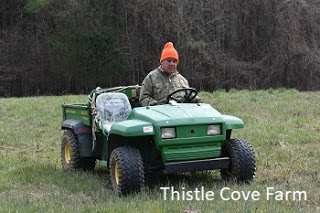 A while back, Daddy and I went for a Gator ride; he wanted to show daffodils that were blooming at the site of an old homestead. Hard to believe that man will be 90 this year; still going strong and has almost finished planting his more than one acre garden! The other morning, while I was doing barn chores, he left a message, “I can’t seem to find my start button this morning. Have you seen it?” I had to laugh; it was almost 10:00 and I was just going to the barn for my morning chores; some days the start button stay hidden better than other days! I tend to rise early but devotions take a good portion of my morning. 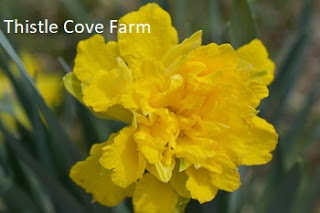 Oh…the “chigger” portion of the title…if you aren’t familiar with chiggers, count your BLESSINGS! As the ole feller said, “Chiggers done near et me up!” Trombiculidae are in the mite family (I know, gag…right!?) Even worse (oh wait…it gets worse?!!!), these obnoxious pests are classified as arachnids…yes, the spider and tick family! (I think I liked being ignorant better!) If you’re truly interested in more information, a search will give you lots and lots more info, including how to ease the pain from bites. Any time of anti-itch cream helps but my old standby is plain bleach because I don’t want to ease the pain, I want those suckers d.e.a.d. and bleach will do that job rather nicely. Bleach isn’t all that good for human skin so I wet a paper towel and take a swipe over the bites. A friend uses a Q-tip which takes entirely too long to suit me but to each their own.

This part of Virginia is also bad for ticks and I’ve grown accustomed to doing a body search on a nightly basis. When I forget, I certainly depend on the incessant itching produced when such a critter has found a (temporary) home.

Truth be told, I’d grown rather indifferent to snakes, chiggers and ticks because the mountains have no chiggers, few ticks and the snakes didn’t venture into the valley. Much. At the last farm, folks would ask, “Why do you have so many barn cats?” (Frankly, I didn’t think eight or ten cats were too many at the barn.) and I’d reply, “I can cats or I can have rats and I’d rather have cats.” I still feel the same way and am hoping the snakes stay at the upper end of the pond, I’m mowing all the tall grass and fallen leaves and expecting “wild life” to keep their distance. (Please God, answer my prayer!) 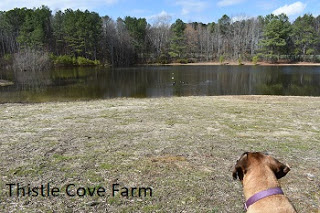 We’re all enjoying our new location and doing our part…the studio has a new shop vac to suck up the saw dust and dirt, all furniture has now been delivered and put into place, mowing and harrowing of fields is taking place, gathering yet more clothes and household furnishings to giveaway, flowers are ready to go into pots, a few herbs wait for their turn, etc. All is well.

There’s time for other fun as well and Rose Patch Creations owner, Kimberly, has started a Featherweight Sewing Club. Jan, my cousin, has a shop in West VA and sold a Featherweight machine to me and the upstairs study (where the television is also located) will hold a small sewing table, chair and other sewing accommodations. First on my list is a quilt for Maxine who is now home and making progress. She’s in desperate need of prayer while she gains strength to begin chemo and radiation for the same malady as has John McCain. On the good news front, Mom is doing much better and a noticeable improvement has been made since she’s been in the nursing/rehab center. She’s now able to go to the lavatory without assistance, has PT twice a day, five days a week and is expected to do more in the way of skills this coming week.

Almost daily, a rehab person will give her quizzes such as “Name a president who was assassinated.” Most would name Kennedy but Mom, being a history buff, named Lincoln, then Garfield. The rehab person was surprised; apparently, she’d forgotten about Lincoln and didn’t know about Garfield. I told Mom if the rehab person said, “Name two days of the week”, Mom should reply, a la Forrest Grump, “Today and tomorrow.” Mom said, “No, I don’t want to give any “smart” answers; they might want to keep me and I’m ready to GO HOME!” She’s been a trooper and we hope for her release by month’s end.

That’s not all the news but it’s taken me three hours to update so will say thank you for reading, for your prayers, your good wishes, your kindness to me. All greatly appreciated. God speed, be safe.

Ponder this ~ “Simplicity is the highest goal, achievable when you have overcome all difficulties.” ~ Chopin ~