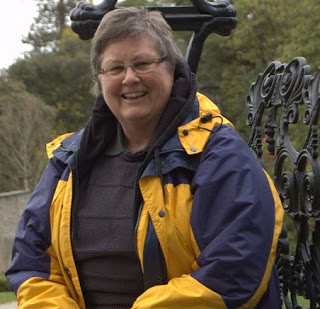 Sharon D. died last week. We’ve known each other for nigh on thirty years and while our friendship wasn’t deep it was abiding and based on a mutual faith in and love for Jesus. Her celebration home going and memorial service was this week and the band of family and friends gathered were bonded through a mutual love of Jesus and Sharon. She was a Christian, a Godly woman of strong faith who lived her faith in small ways and large, both quietly and strongly. If she said she was praying for you, you could consider it fait accompli.

As I sat in the small chapel I thought over the years and was startled to realize Sharon and I mostly knew each other through our leaving. One or the other of us would leave central Virginia for Texas or South Carolina or Southwest Virginia. These leavings were always preceded by Bible study and prayer.  One of the very few times in my life God spoke to me using another person, He used Sharon. I was in a dither, trying to be at peace with a decision to uproot and move to S.C. Sharon quietly opened her Bible and said, “God is impressing upon me to read this verse” and she did. That same verse was one I’d read earlier in the week and a few days later was quoted by my Mom. To this day, other than me (and, of course, God) no one knows the connection or the verse.

God still speaks but we must daily be in His Word to perceive His whisper.

Later, I told Sharon how God had used her to help me, both of us knowing it was another of His mysterious ways of dealing with His daughters.

Years later I met Dave and after a six year courtship we decided to move and marry on the front lawn of Thistle Cove Farm. Sharon was there in spirit and prayer then visited later with her best friend, Marti.

Sharon and I weren’t intimates. We didn’t delve into each other’s lives and plumb the depths. We were women who held the other in high esteem and prayer, celebrating Jesus, secure in the knowledge we’d end our earthly days “absent in the body, present with the Lord“.

Sharon was five days younger than I and has a daughter, Cat, who has a fiance, Will. The three of them had one last wonderful adventure when they traveled to Europe this Autumn. The photo montage shows extreme happiness on those three faces as they traipsed across alpines and villages. I think watching that video again and again will help with the grief process but as I told Cat, “Grief takes as long as it takes. It can’t be rushed or ignored else it show up later in ways you don’t want or need to deal with.” As C. S. Lewis said, “Sorrow is not a state but a process.” Dave’s been dead six plus years and the grief still catches me unaware. I’m not in a puddle on a daily, or even weekly, basis but the grief is as real as it ever was with the gaping emptiness just as huge. (And please don’t e-mail me with the advice to “get over it” but if you want to give words of encouragement, edification and love, those are gladly accepted!).

Grief is a foreign country with an unknown language and there’s no guide book. Most of us don’t want to visit but if we live long enough, we’ll get to to that land. God alone knows how long we’ll reside there but He is with us (me) each and every moment. Had He not been, I would have followed Dave.

Sharon, don’t rest in peace. You’re free from pain, suffering and all the ties that bound you to earth. No doubt you heard, “Well done thou good and faithful servant” and have joined that great celebration choir. Who knows the plans God has for us and for His glory but, for those who love Him and are called, those plans include Heaven for all eternity. He has work yet for each of us; I know, beyond a shadow of doubt, you’ll work joyfully as you gaze upon Jesus’ face. Just as you’ve done.

The last time we saw each other we held hands and I whispered a quiet prayer into your ear. I also wanted you to tell Dave, if allowed, I’m doing okay but as my greedy brain cast about for the right way and words to pray, I forgot my question.  People tell me Dave is watching over me and hears me should I talk to him but I’m not comfortable with that notion and can’t find anything Biblical to support it. I am comfortable knowing God watches over me and gives His angels watch care as well. In ways large and small God lets us (me) know He cares. When I arrived at the chapel, the greeter handed me a yellow rose. Yellow roses were the number two choice Dave always gave me and in being handed that yellow rose, God let me know He knows and He cares. I hope He was as loving toward the others in that room.

Sharon, once again our friendship is based on leaving. I was born first and you’re leaving first. Now, as does Gabriel, and with that great cloud of witnesses gone before, you’re standing in the presence of Almighty God! That makes me shout and dims the grief; Praise God!

Ponder this ~ “Jesus said to her, “I am the resurrection and the life. The one who believes in me will live even though they die and whoever lives by believing in me will never die. Do you believe this?”

And Sharon answered Him saying, “Lord, I believe.”