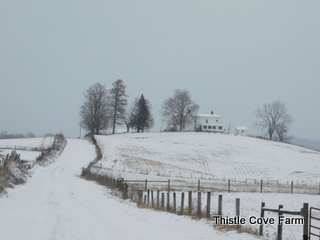 Food, shelter, clothing are, or should be, everyone’s concerns and once those three needs have been met, we’re ready to move to wants. Lately, my concerns have revolved solely around needs; specifically around water…even more specifically, frozen water. Last month, the horse trough froze (several times) and this month, the heating pipes froze, burst, thawed and the resulting mess is epic…I’m sorry to say.

As the insurance adjuster and I are standing in my bedroom, he said, “I just don’t see how the pipes could have frozen. Did you have the heat on?” It’s a fair question and although the dogs and I sleep together, I still require need heat. My answer was, “Yes, but when the temps are below freezing (-5 degrees F) with a wind chill taking temps into minus double digits…and when the wind is coming from the west, clashing against the west corner of the house (my bedroom), Mother Nature will have her way with mere wood and copper”. 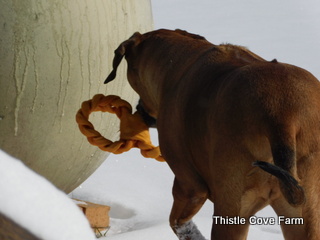 ~ Sadie, carries her chew treat to keep it from Sam
eventually, Sam returns the favor ~

When we first moved here, we were told the coldest recorded temperature in this county was on the hill to the northeast; a distance of a few hundred feet. In January 1996, Dave and I saw the back porch thermostat at 35 below zero but with no wind chill, thank God! 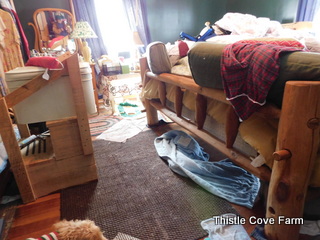 The bedroom, where the damage originated, had two or three inches of standing water. I began throwing down blankets, towels, washcloths…I managed to retain a modicum of sense and not throw down my red flannel nightgown…lol. As I was able, I threw things on top the bed, atop the stairs the dogs use to get into bed…Lord only knows what all I did…I can’t remember.

To return to the beginning but making this a quick post…Sunday temps and weather were horrible for a lot of the country, including Thistle Cove Farm. The day began normally but as it wore, I noticed it began to get cooler in my bedroom. I raised the thermostat setting but cool became cold and the pipes eventually froze so using a heat gun and hair dryers, I attempted to thaw the pipes but it was a losing battle. 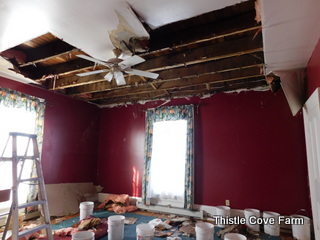 Due to my now complete and utter exhaustion, memory fades and confusion reigns but a vivid memory is of a crashing sound that turned out to be dry wall falling from the ceiling into the dining room. The frozen bedroom pipes had thawed and boiling water was being spewed forth like a geyzer and, yes, it did hurt burn when, using bath towels, I tried to stem the flow. 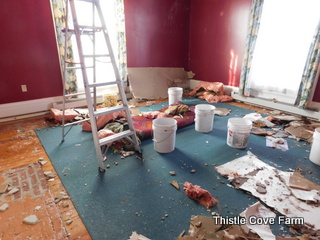 Immediately, I began running into the dining room, gathering up sewing/quilting supplies, machines, spinning wheels and taking them to safety. The winter after Dave died, I began using the dining room as a place to quilt, spin, weave, etc. as it was safer than going outside to the small building behind the house.

Twice, as I retrieved “something” and turned to run, the ceiling crashed down where I’d been standing perhaps two seconds before. Needless to say, there are no photos of events as they happened, only after the fact. As the ceiling crashed, in order to retrieve belongings, I had to take time to haul wet sheet rock and insulation to the porch…not a pretty mess, eh? 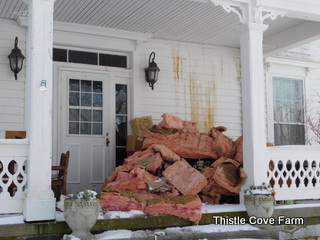 When it all began to overwhelm me, I grabbed the phone, dialed Mary and cradled the phone against my shoulder as I kept hauling stuff out of the room. When she answered, I’m rather sure I wasn’t all that coherent but managed to say, “This is the worst it’s been since Dave died; I can’t cope. I’m afraid I’m at the point where I’ll do something stupid.” We both knew what that meant. She said, “I’ll get Eddie and we’ll be there as soon as we can.”

Now this is the point where it needs be said what that entailed. Mary (and her son Dustin) had to leave their home in Burkes Garden, drive across a rather treacherous mountain, to Bluefield, WV, pick up Eddie, then drive to my home. That’s a distance of about fifty miles…and in the night time low temps, snow and ice and it took them about two and a half hours when normally, it would have taken an hour, thereabouts. 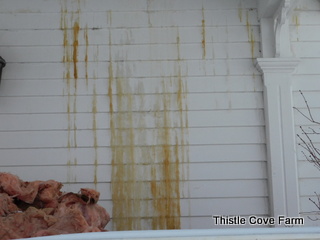 The outside wall is a sheet of brown ice, colored by the floor stain and, yes, the wall will need to be painted in the spring. This process will take the house, and me, months to recover.

As soon as they got here, Eddie took over and Mary took me aside saying, “You need to stop, stand still and let’s pray” and that’s exactly what we did. Mary and I are both Bible reading, Bible believing Christians and, in the name of Jesus, she prayed for any and all evil (Satan) to leave this house immediately. She prayed for the peace and grace of Jesus to prevail, for any doubts in my mind to be gone.

You may know what the Bible says…”where two or three are gathered together” and for Mary praying I am eternally grateful. Actually, we’ll probably never know, until we get to heaven, the full impact of her prayer.

When we couldn’t get the water stopped, I called Daniel Miller who came and used rubber inner tube to slow the flow of boiling water. Both Daniel and Eddie are handier than pockets on a shirt and what they’ve forgotten isn’t worth knowing!

Sunday wore on into Monday before things were to the point we could collapse and I’m pretty sure I may have passed out before folks were down the driveway. Even so, that didn’t happen until the wee hours. 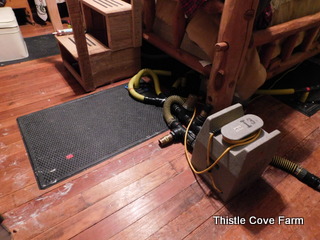 I would have thought exhaustion would cause me to pass out, and it did but only for a few hours. I woke early, sent an e-mail to my insurance company to get things going and, as soon as it was “working hours”, I called ServPro and Jeff and Taylor came that afternoon. In the meantime, Mary, her children and Eddie returned and clean up began in ernest. By that I mean, Eddie started tearing down remaining wet sheet rock, moving furniture, etc. 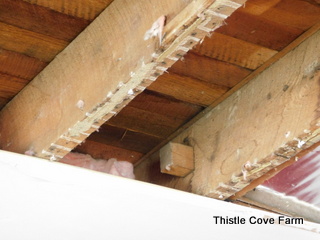 So, what’s the good news? Well, God is faithful and this is part of His plan. Other good news…once again, I can see how beautifully and well made is this old house. In the above photo, the mortise and tenon brace is evident and this is only one in the room, there are others along with knee braces and supports. In the attic, the joists are numbered in the Roman Numeral style...the way things were done by Master Builder Thomas Hawkins back in the 1800-1900’s. I’ve always said living on this farm has been the best one-third of my life and nothing that’s happened changes my mind. Bless the name of God, I am bowed but not broken.

How am I doing? As Dave would say, “C, C-” for a variety of reasons: I’m not sleeping well due to keeping the house so warm hot to dry out the plus 100 year old wood. I’ve moved to a spare bedroom and will live there for the foreseeable future but last night it was 85 degrees. The dogs pant and sleep restlessly and I sweat and sleep restlessly; I’ve been up since 2:30 and it’s now after 6 a.m. I’m not eating well…takes energy I simply don’t have and am busy talking to contractors (Gillespie Construction), plumbers (Daniel Jones), insurance adjuster, ServPro…on and on the list goes. Also, the machines being used to dry and de-humidify are LOUD…relentlessly LOUD and I’ve a constant headache. Plus, I can’t use the coffee pot, microwave, convection oven or stove oven because the machines are pulling all the electricity and causes circuit breakers to flip off.

Last night, Brandon H. and his crew, delivered two loads of firewood…black locust, cherry and red oak (hurrah!!), I’ll have to order more oil and propane and it feels like I’m burning though money that would give Bill Gates pause. Bless God, today the temps are already in the 50’s so the dogs and I will be able to get outside for a nice long gambol after I’ve returned from town errands. 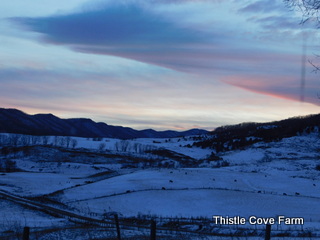 For your prayers, I am ever grateful and, with God’s help, I’ll get through this as well (but, sorry to say, I’m sure to be even more negligent in responding to comments). In an effort to be “normal” (whatever that means…) yesterday, Eddie and I began clearing/cleaning the living room which is where the brunt of belongings were stashed while I was frantically rescuing things from the dining room. He then set up my laptop computer on the desk and linked it to my scanner/printer. It’s my intent, when clean up, construction, etc. becomes overwhelming, to begin work on the story of the best one-third of my life. The working title is The Thistle Cove Farm Epistles ~ God Has a Plan.

“God has not promised skies always blue
flower strewn pathways all our lives through
God has not promised sun without rain
Joy without sorrow, peace without pain
But God has promised strength for the day
Rest for the labor, light for the way
Grace for the trials, help from above
Unfailing sympathy, undying love.
God hath not promised we shall not know
Toil and temptation, trouble and woe;
He hath not told us we shall not bear
Many a burden many a care
God hath not promised smooth roads and wide
Swift, easy travel, needing no guide
Never a mountain, rocky and steep
Never a river, turbid and deep.”    (here)
Share
Pin
Email
« Sabbath Keeping
Sabbath Keeping »