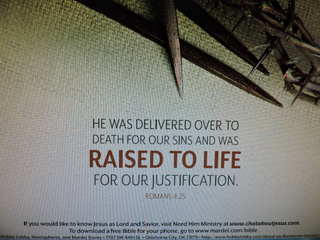 “He was despised and rejected by men, a man of sorrows, and familiar with suffering. like one from whom men hide their faces he was despised, and we esteemed him not. Surely he took up our infirmities and carried our sorrows, yet we considered him stricken by God, smitten by him, and afflicted. But he was pierced for our transgressions, he was crushed for our iniquities; the punishment that brought us peace was upon him, and by his wounds we are healed. We all, like sheep, have gone astray, each of us has turned to his own way; and the LORD has laid on him the iniquity of us all. He was oppressed and afflicted, yet he did not open his mouth; he was led like a lamb to the slaughter, and as a sheep before her shearers is silent, so he did not open his mouth.”
~ Isaiah 53:3-7 ~
“Do not abandon yourselves to despair.
We are the Easter people
and hallelujah is our song.”
~ Pope John Paul II ~

“And now brothers, I will ask you a terrible question, and God knows I ask it also of myself. Is the truth beyond all truths, beyond the stars, just this: that to live without Him is the real death, that to die with Him the only life?” ~ Frederick Buechner ~

“If man had his way, the plan of redemption would be an endless and bloody conflict. In reality, salvation was bought not by Jesus’ fist, but by His nail-pierced hands; not by muscle but by love; not by vengeance but by forgiveness; not by force but by sacrifice. Jesus Christ our Lord surrendered in order that he might win; He destroyed His enemies by dying for them and conquered death by allowing death to conquer Him.” ~ A. W. Tozer ~

“Our Lord has written the promise of resurrection,
not in books alone,
but in every leaf in springtime.”
~ Martin Luther ~

“The resurrection of Jesus changes the face of death for all His people. Death is no longer a prison, but a passage into God’s presence. Easter says you can put truth in a grave, but it won’t stay there.” ~ Clarence W. Hall ~

“I no longer have to be afraid of looking foolish, or wonder what people might think about me, as long as I please the One who conquered death.” ~ Sarah Holman ~

“We live and die;
Christ died and lived!”
~ John Stott ~
“Our old history ends with the cross;
our new history begins with the resurrection.”
~ Watchman Nee ~
“He was delivered over to death for our sins
and was raised to life for our justification.”
~ Romans 4:25 ~