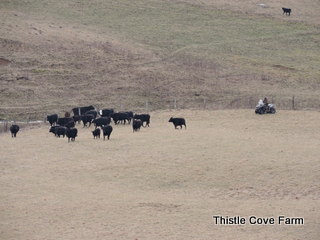 Only yesterday I awoke to a passel of cows and calves in my lower field. They’d broken through the fence because my field is, primarily, a hay field while their field is grazing and hay. My field hasn’t anyone eating it down so was lush to their way of thinking. 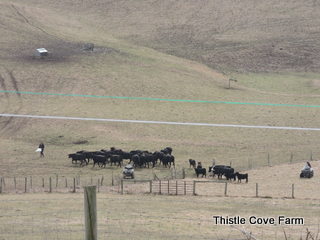 These men are neighboring farm workers and I don’t believe are afraid of anything! A few months ago, I told one feller his rooster had flown the coop and was living in my barn. He said, “I’ll be up after work and get it” which was better than fine with me. That blasted cock had talons that looked like eagle talons and every time I went into the barn, he gave me the stink eye. It was only a matter of time, or so I believed, that bird would attack me and then, as they say, the fight would be on! He might get a meal but I have the upper hand…due to thumbs, don’cha know…and don’t hesitate to shoot anything that throws the first punch. You’ve been warned, I told the bird, but he acted not at all impressed and again with the stink eye.

Anyway, by the time I left the house and got to the barn, Ty walked out of the barn, cradling that bird and petting him like a kitten. For a fast moment or two I was embarrassed but then took a look at those talons and felt better about it all.

So, back to the above photo…one man is riding a four wheeler while the other man is leading the cows through the fence. The most amazing thing is, the man walking is carrying a feed sack full of grain. I don’t know about you but there is absolutely NO WAY I’d walk in front of a bunch of pregnant cows rattling a feed sack! I mean, anything pregnant is always hungry…right? B.R.A.V.E. 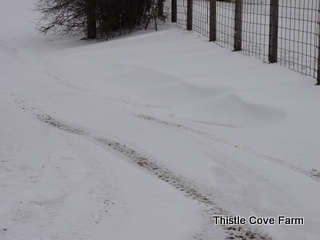 Today, it’s a foot of snow on the ground with drifts of two feet and another foot of snow expected by Thursday because it hasn’t stopped snowing since it started. So much for the “1 to 3 inches” we were told. 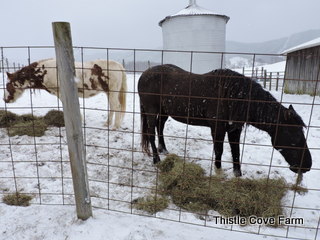 The dogs and I sweater up and go to the barn twice a day to throw out hay for the American Curly horses. They could do without because they have a round hay bale in the pastures, but it makes me feel better taking such good care of them. Miss T, the black mare, has ice hanging off her coat but due to the extra layer of fat and the hollow core fiber coat, she’s in good stead. All Curly horses have hollow core fiber, extra layer of fat and used to be range horses out west. Miss T was an abused horse that Dave gave me for my birthday when I begged like a toddler. Finally, he gave in and let me go get her and bring her home but his words were, “You mean we have to BUY a rescued horse?” Well, yes, but she’s been a good ‘un and I’ve never regretted the decision. All the horses have run-in shelter but they rarely stay in the barn which is all right with me; I figure they know how to be a horse better than I. 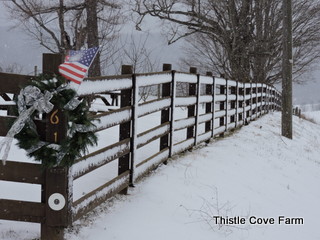 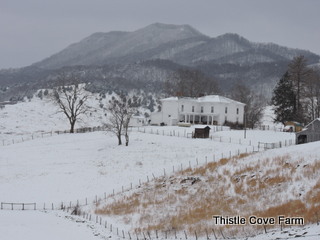 while the view from the main road shows home with Short Mountain in the background. Short Mountain is part of the Clinch Mountain Range and the Clinch Mountain Wildlife Management Area is the second largest, but most biologically diverse, in the Department’s management area system. There are vast differences in elevation and the 25,477 acres are spread over four counties…Tazewell, Russell, Smith and Washington.

So blogger buddies…I’m a bit chuffed at you. Yes, that’s right YOU. Not a single one of you sent me a note to remind me of my terrible memory! Or….don’t you remember? LOL Last month I had a giveaway for the Downton Abbey cookbook and #4 Martha won. She’s been notified she has until 6 tomorrow night to claim it or I’ll have to have another name. My apologies, all, for my memory.