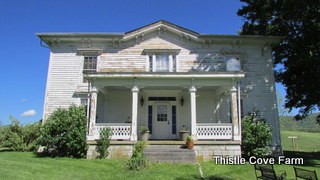 It’s been said when the first Anglo settler’s arrived on the shores of the New World, a squirrel could run from tree top to tree top from the Atlantic to the Pacific. Old growth, virgin forests provided the fodder for the cabins Anglo settler’s needed from protection from the elements and to provide a home for the family.


Some time prior to the Revolutionary War, King George gave a land grant of several thousand acres to those first Anglo settlers. The Bowen’s and the Ward’s were the first Anglo families in the valley but I’m unsure to whom this farm was given in a land grant by King George. I’ve not yet researched back that far but hope to sometime this summer.


The War Between the States brought discord, death and destruction; brother against brother, father against son, families against families. Down the valley, Melindy was a part of the Bowen clan, Dave’s Mothers’ clan, who freed her when she was a young girl. Today, so many people don’t understand why a young black woman would stay with those who had owned her but where was an uneducated, poor black girl going? Her skills were survival and homemaking; during the War, she’d dress in men’s clothing and march around the house, silhouetted against the light. She was trying to make the Yankee’s think there were men on the premises when there was naught but woman and children. 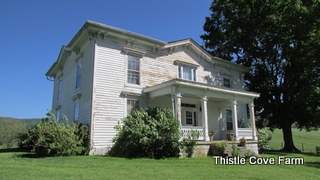 So the story goes, Aunt Melindy, as she came to be known, despised the Yankee’s because when they finally came to the house, they made her kill her chickens and cook for them. She felt a strong kinship with her white family and they with her and she stayed with them until Dave’s Grandfather bought her a small house in town. She moved to that small house but continued to return to her employer’s as daily housekeeper.


Our farm, nameless until Dave and I named it, was sold with several thousand acres to either Shadrach or Meshach or Abednego White for $300 in back taxes around 1870-1885. The White family lived here until 1948 when a Gillespie, a relative of Dave’s Mother bought it and owned it until we bought it in 1995. Yes, Dave and I are the third buyers since the late 1800’s.

When Dave and I moved to the Cove, our house was rather pathetic. Hay, several old, broken toilets and other debris were stored on the second floor and that first January winter of 1996, I had to shovel snow from the inside of the house to the outside of the house. Dave and I lived in three rooms with our bed set up about three feet from the soapstone stove we used to heat our few rooms. Each morning I’d walk through the house, kitchen pot and wooden spoon in hand, banging and making noise to run away the animals who’d sought shelter during the night.


We’d stripped the house bare, removed the plaster walls and ceilings down to the studs and put up R-19 insulation that would pop out of the walls during violent winds. We finally realized we had no hope of walls before spring so we decided to put up 6 mm plastic to hold the insulation in the walls. It might surprise you the house became discernible warmer with such a small addition. If Dave and I could get the inside temperature up to 50 degrees F, we’d sit around in shirt sleeves and celebrate. Mostly, we wore three or four layers in order to keep warm and the coffee pot was never empty nor cold. 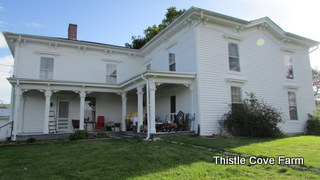 The weighted windows didn’t work, the sky could been seen through sections of the roof, some chimneys had broken off at the roof and bricks tumbled into the fireplaces. It was colder than a witch’s tit in a brass bra, as the saying goes. That same January of ’96, on Monday the 22th at 7 a.m. the back porch thermometer read 35 degrees below Fahrenheit; thank God, there was no wind chill that night. Even so, Dave and I slept in 2 hour shifts in order to feed the stove so we wouldn’t freeze to death. During the wee hours, Dave stuffed our two cats under the electric blanket but I’m not sure if that was to keep the cats or our feet warm smile. 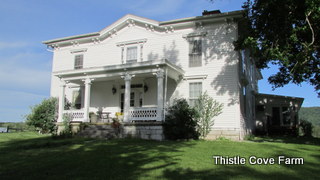 I kept a journal of those first 18 months and it provides excellent reading now. It also reminds me how strong and brave we were to take on such a huge job. Dave and I were newlyweds, having dated for six years before deciding it was time to make a change. We put our Richmond homes on the market and Dave moved to the farm in May 1995. In late June, I moved to the farm and on July 22 we were married on the front lawn. It was a small wedding with a few family members, a few friends, a neighbor or two and a picnic lunch with a country ham and a sheet cake that said “Congratulations Sandra and Dave”. Sandra, my beloved best friend, stuffed Mason jars with thistles, Queen Anne’s lace and ditch lilies to sit around the tables. The day was, in a word, perfect!


Last week, Jude Sherlock and his crew, spray washed then spray painted the old farmhouse. After they spray washed, the poor old house reminded me of the first time Dave and I saw it. Paint was peeling, stripped to the wood and sadness was the crown. On Saturday afternoon, after being painted brilliant white, the Grand Olde Dame looked marvelous! Now, the house absolutely glows in both the morning and afternoon sun and it pleases me so much to have it painted. Everyone who has seen it comments on how beautiful it is now.


We’ve come so far…this old house, Dave and I. Lives were formed and changed here, love was tasted and tested and proved worthy; our lives were filled with grace and peace and joy and, to be truthful, some arguing and disagreements. That’s a good thing though because it means we were listening and talking with and to each other, always growing toward each other and not away. It was a good great life, filled with sweetness and I’m reminded of the verse “taste and see that the Lord is good“.

Share
Pin
Email
« Thank You for Serving
Our 1914 Acorn stove »