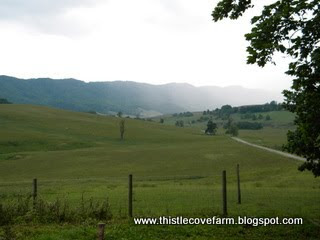 ~ rainstorm coming from the head of the Cove ~
Be sure to look at my side bar for KC Willis’ workshop: I Send You Wings.

I hear the rolling thunder so there’s a chance another storm is on the way. We’ve had storms almost daily this week and looks like we’re going to end the week with another one. We’ve hay in the field that needs cutting, raking, kicking and baling but it’s not going to happen any time soon; storms are predicted for the next few days.

In the photo above, you can see the sheet of rain coming down the valley; it’s coming from the head of the Cove. I’ve stood in the yard, arms outstretched while the rain covers me, first one outstretched arm and fingertips, crosses over my torso and then on to the other arm and finger tips. It’s a very delicious feeling!

This week has been full, very full of house repair, re-doing the farm office bathroom and smaller office, spring cleaning and tidying the studio, housecleaning, crocheting rag rugs and helping mend horses. I’ve two mares, mother and daughter, who are both foundered. They need to lose about 100 pounds each, maybe a tad more and they aren’t, even a little bit, happy about it. Just about as happy as I’d be if I had to lose weight and someone put me in a locked room with nothing but crackers and water.  Their feet were trimmed last week by a man who has been trimming horse feet for quite some time but not as long as my regular farrier who has been working for thirty years. He’s a hoof specialist and has, just about, seen it all in his career. The first man did a really good job but he didn’t take off as much as, perhaps, he could have. He didn’t want to make their feet any more tender than already in evidence which I greatly appreciated.

The farrier came yesterday, at my behest, because I was concerned both mares still had tender feet. I’ve only had horses about 14 years and am a, relative, newcomer to horses; sheep too, for that matter. Most of what I’ve learned has been taught to me by the farrier, vets and OJT – on the job training. I’m still timid though, when it comes to trusting my gut. The farrier told me yesterday, “You know more than you think you know…trust your gut and, yes, they are both foundered!”

He trimmed another inch, perhaps a bit more, off the front feet of both mares and they were extremely tender footed for most of the rest of the day. Lightly, the daughter, and Peach, the mother, are put up in a “short lot” where they are totally dependent upon me for food. They have free choice water and shelter but the food is slim pickings.

When we returned from grocery shopping, Lightly was feeling better. I could tell because she was playing in the water trough; splashing herself and anyone else who was close enough to get wet. She had a grand time! 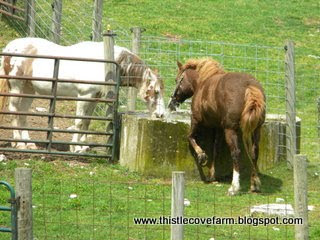 ~ Lightly and her half brother, Dandy Man ~ 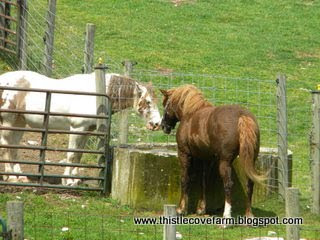 They are separated by a gate and fence because Dandy isn’t on a diet. He’s still unhappy though, because he’s a Momma’s Boy and loves being with the girls. 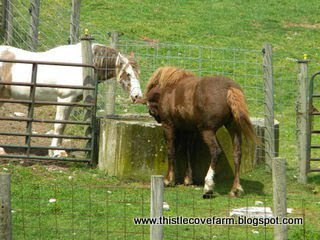 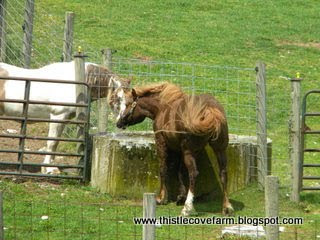 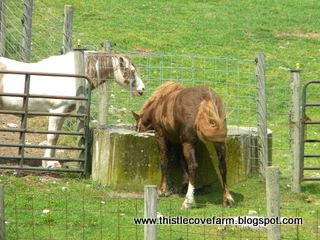 ~ up to her eyeballs in water ~ 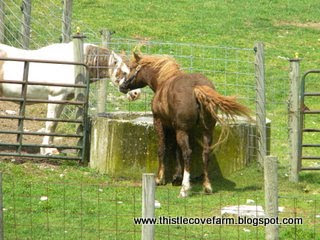 ~ just about finished ~
Lightly and Peach need to be tended to twice a day. I clean their feet, clean the barn and the lot and, usually, give them a small handful of hay just to let them know they are loved. Today I also picked a lot of the rocks out of the lot so they would have, mostly, grass to walk upon. Some of the rocks can’t be moved…like the one in the right of the photos. That’s the placement of the waterline, going from this trough to another trough and needs to stay in place. I also gave them de-wormer today; when they are on a short lot , I like to keep them as healthy as I possible can.

We have exceptional pasture in our region; one of the top two or three in the world, and it’s very rich. American Curly horses are extremely easy keepers and it’s a juggling act keeping them from gaining weight. So, for the next three months, I’ll keep them on short rations and, slowly, very slowly, re-introduce them back into the pastures. But there’s a stretch of time between then and now; in the meantime, they pout -grin-.

Wash needs to be gathered off the line, studio needs to be closed, barns need to be locked and then there’s porch furniture to be held down. I’ll show you the rag rugs later and explain how I crocheted them. It’s been a learning experience and the second one looks better than the first but they both look good. I’ve already got the colors picked out for the third one which will go in the farm office bathroom. One of the rugs I’ll send to my sister for her deck; that should keep her feet toasty when it turns cooler weather. Speaking of, please forgive me for whining about the cold this past winter; today was in the 80’s and it’s supposed to be in the mid 90’s on Sunday. We’re in the Appalachian Mountains, it’s not supposed to be that HOT this SOON!