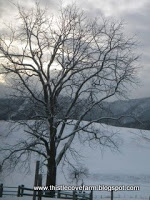 Perhaps you can tell from my header photo, we live in a, fairly, remote area of Virginia. There are other areas of Virginia that are far more remote but we’re “out there” by almost anyone’s definition. Just ask the folks who manage to make it here for Sheep Shearing Day -smile-. Invariably, the first timers get out of their car, stagger up the driveway and say, “I thought we’d never find you!” I’ve had one or two say, “You need better signage!” That’s when I pull an Alice in Wonderland on them.

“How,” I asked, “could I have better signage when I have no signage at all? The website directions, however, are excellent!” They stare at me blankly. I told one gentleman, arriving by following only the website directions, it was a little like being a Christian. “It’s all about faith; you’ve either got it…and you must because here you stand in front of me…or you don’t.” Then there was the …man…no gentle in front for good reason! who called and left an abusive message on my answering machine. He cursed, called God’s name in vain and then lit into me because he was lost. I kept hoping he’d find us so I could pray for him, loudly and publicly, but he never showed. Just as well, I’m sure -smile-.

We live about thirteen miles from town and, generally, can make the trip in twenty to twenty-five minutes. Yesterday, we went to town at 10:00 a.m., planning to do a few errands and be well on our way home…if not home…by 2 p.m. The eye doctor has released me, saying my eye has now totally healed -Thank YOU, God!- and I’m able to return to exercise. It’s been so long since I’ve taken exercise that I’m having to begin, virtually, all over again so all I did yesterday was walk a mile plus on the treadmill. Then to the library to stock up on reading material, the feed store to have a couple of ham biscuits for lunch -customer appreciation day so they were serving ham biscuits, cookies and coffee, YUM!, the post office -to mail a box to my nephew serving his second tour in Afghanistan and send Christmas cards- and then home. We were about six miles from home, driving in a now beginning to look serious snowstorm, when I told Dave, “we’re down to about a quarter tank gas”. After a hasty consultation, we decided to turn around, head back to town and fill the tank. Going down Plum Creek there were signs this might not have been such a great idea but we were in it and there wasn’t a place to turn around, at least, not until the bottom. 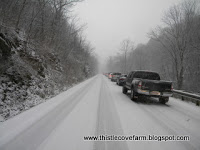 Bad Signs: one man’s car was in the ditch, up against the mountain rock, on the way UP while another man’s truck was seriously pushing the guard rail on the way DOWN and, not quite to the bottom, the school bus was pulled over and the driver was putting on chains. Just beyond, a woman in a compact car was sitting in the middle of her lane, headed up, and it looked like she was frightened stiff. The dozen or so vehicles behind her just looked annoyed but, generally, speaking, everyone was polite.  Dave and I went to town, filled the tank with gas and headed back thinking Plum Creek would be clear. It was clear until the second curve and then it looked rough, really rough. The same people we saw while headed to town were the same people we now saw…no one had moved, not an inch.

As I looked to our rear, we saw a driver trying to turn around in the middle of the road. Unfortunately, she had only a compact car, no four-wheel drive, and was in Trouble. 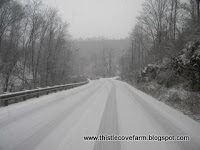 She didn’t pull up far enough on the road, probably too slick, and when she tried to gain purchase, there was none to be found. The little car started slipping but she managed to get it stopped before it either landed against the guard rail or, God forbid, went over the guard rail and into Plum Creek. William, our neighbor six miles up the road, tried to help her but there was nothing to be done. She was stuck, in the middle of the road and could only wait until a tow truck came to rescue her. We loaned her our cell phone so she could call home and let them know she and the child were all right but held up for a while. I felt sorry for her but glad she, nor anyone else, was injured. 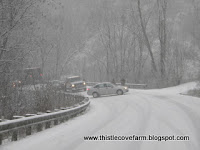 Dave and I travel with audio books so we turned on the speakers and prepared to wait. About forty-five minutes later I decided to walk up the mountain and see what was happening. There was nothing happening, nothing at all. We were all sitting there, behind that one little woman who still looked terrified. Someone was there, trying to be of help to her but she simply looked dazed and panicked. As to other drivers, no one had gone around her, no one had tried, not even the folks with four wheel drive. A sheriff’s deputy was headed down the mountain so I stopped him and asked if we could go up. He shook his head “no”; it was terrible, nothing but snow covering ice with sleet mixed with more snow pouring from the sky. He was having trouble and a few yards later, his four-wheel drive vehicle slipped into the ditch. He was able to gun the engine and, in a few yards, pull out of the ditch but first he frightened me half to death. I heard him start the slide and when I turned around, he was headed straight at me. I yelped, although truth be told, it was more of a little big girl scream, and scrambled to the guard rail, thinking I could run behind another vehicle. Well, that was dumb. If the deputy had hit the car between him and me, it would have thrown me either into the guard rail or over the guard rail and down the mountain into the creek.
I came back to our car and told Dave, “I’m turning around and we’re headed down the four-lane” as Rt. 460 is known around here.
That’s what we did. We turned around, went back down the mountain then to Rt 460 west. All told, from the time we left town the second time, just before 2:00, until the time we, finally, arrived home, was two and a half hours. I called William, our neighbor, to see if he’d made it home and he hadn’t. I left a message and he called at 6:05 and said he’d just walked in the door. Those folks sat on Plum Creek Mountain from a little after 1:00 until after dark! The sheriff stopped all the non four-wheel drive vehicles from attempting the climb and only allowed engaged low four-wheel drive vehicles up the mountain.
The snow storm gave us about eighteen inches of snow but drifts of more than three feet. This is the sun room porch. 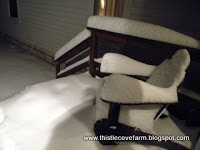 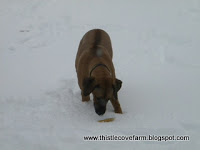 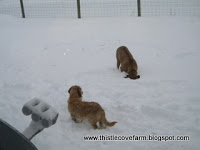 ~ Sadie, head buried, as she stuffs her chew into snow ~
Sam, especially, loves the snow. He goes outside, alone, to romp, play, roll, bark at “whatever” and have the time of his little life! Sadie loves the snow but only if Sam is outside with her. Sadie loves to roll Sam, run Sam, torment Sam and Sam? He loves it too! 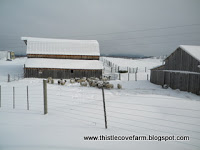 Isn’t this a beautiful photo? Even though the snow is deeper than my boots, even though I have to break a path for myself and Abbie, it’s beautiful! The sheep were waiting for their hay and didn’t seem the worse for wear. They actually love the snow and colder weather but aren’t as crazy about trying to break paths. I’d rather they stay close to the barn and house anyway. I’ve got a blue electric bucket, filled with water, at the horse trough and I broke a path so the sheep can get to their warm drink. 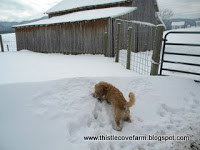 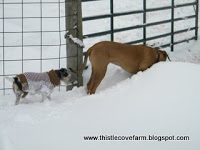 ~ If I’m not available to break a path for Abbie, she’ll settle for Sadie’s help ~ 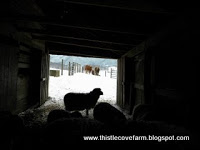 ~ Sheep in their barn, horses beyond ~
All the animals have free choice shelter and warmed water to drink. 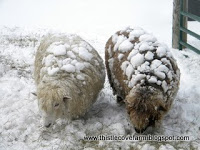 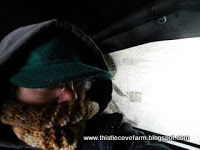 I wear plenty of warm clothing, so much that I’m usually too warm, especially if the wind isn’t blowing.  Over the years, I’ve found layers the best way to keep warm and the best way to accomplish chores. When wearing too many bulky clothes, it’s difficult to move and, if I fall down…like today…more difficult to get back on my feet. Today I wore tights, sweat pants, wool socks, long sleeved tee-shirt, light weight jacket, light weight hooded sweat shirt and, finally, a heavy sweat shirt jacket but no gloves. The temp was about 26 but no wind so chores were easy today. The Ranger has a wonderful heater and that’s a huge help; especially for Abbie. At some point during chore time, she’ll get into the Ranger and the only way she’ll come out is if I carry her back to the house. She’s an old girl and I don’t mind; we’ve been BFF a good many years now.

We’re expecting more snow, church has already been canceled tomorrow as has the Christmas play tomorrow night. Another storm means cloud coverage and that means no internet. I’m prepared though, this entry will, hopefully, go up in a few minutes and there are a half dozen library books waiting. The  corn bread goes into the oven in a few minutes to be eaten with the bean, kilbasa, turnip green soup and, wonder of wonders, we still have electrical power. Life is ummm ummm good!