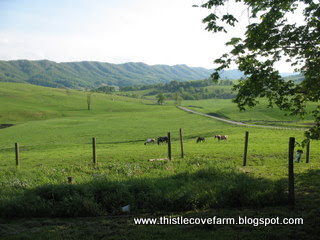 I never, ever tire of looking down the valley, towards the head of the Cove; in late afternoon and early evening the light is breathtaking. On maps,the Cove is called Ward’s Cove because the Ward family first settled the head of the valley. They weren’t the first white settlers here, that title belongs to the Bowen’s, my husbands’ clan. They arrived from Wales and, eventually, made their way to the Cove in the mid 1700’s. Maiden Spring, the largest body of water flowing out of the Cove was named by Rees Bowen. It’s said he was on a hunting expedition and asleep by the spring when he awoke and saw a maiden deer; thus the name.

It’s Blackberry Winter in the Cove and right on schedule. Always, around 10 May we get cold, wet, rainy weather; sometimes we even have snow. What ever the weather is Spring Equinox, that’s what we’ll get around 10 May. I don’t think I’ve ever know it to be bright, sunny, warm but always a last reminder of winter just to keep us in shape.

In the Cove, we’ve had frost every month save August…or was it July? I can’t remember but it was one or the other. It, almost, feels like we should have frost this week. The temps have been quite chilly and great for sleeping.

A young woman, age 40, passed away in the community and her wake and burial was today. I attend the wake, but not the funeral, and it was good to see how many people were able to be there to support the family. Death is always hard but when it’s a younger person, it’s especially difficult.

On the way home, I drove down Cove Road, into the head of the Cove just to listen to bird song and enjoy God’s creation. This moss covered rock is so beautiful and everything is so lush and green due to the great amounts of rain we’ve had. We’ve had rain for 15 or 16 days now and the Earth is just blossoming! 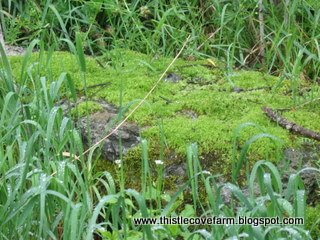 These beautiful flowers…can’t remember the name so, please, help if you know…are going to be dug up and brought to the house and re-planted. There were several patches where I found these but I’ll only dig up a small patch to be re-located. There’s no need to be hoggish. 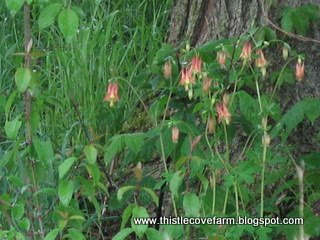 Neighbor Bill has a pasture behind us that also stretches down the valley. Normally, he keeps cattle on this pasture and it’s always a beautiful site watching the cattle as they graze. During winter and colder months, watching the fellers feed out hay is interesting and, during calving, it’s always fun to watch as they chase down calves for tagging. Calves are crafty creatures and even when a day old are able to, quickly outrun a man. I’ve watched as the men would chase down a calf only to be tossed aside or, if the cow is able to intervene, the man has to abandon the job and run for his life. Farming is a Very Dangerous Business so, if you eat a meal today, Thank a Farmer. Oh, and if you’re reading this…Thank a Coal Miner. You and I are indebted to both. 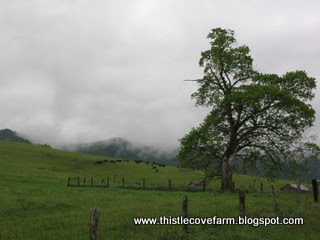 My horses are grazing in the pasture next to the sun room and the walnut tree is lovely as it’s just leafing out. Dandy Man, on the far right, turns to watch as I take photos. He’s my “in my pocket horse” and he watches to see where I am and what I’m doing and, I believe, he loves me as much as he loves his own mother. 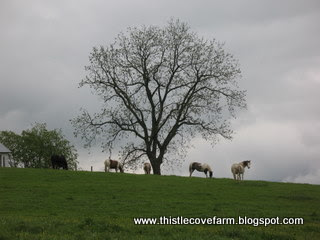 The skies tell the story – cold, rainy, windy. We may have warmer, sunnier weather later this week but for today, it’s Blackberry Winter.