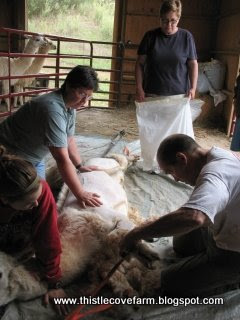 Today was alpaca shearing day Mary Martin’s. As you may recall, Mary helped at Thistle Cove Farm on sheep shearing day back in early April and, when I found out she was shearing alpacas, she graciously allowed me to visit and take photos.

In the photo above, Mike, carefully, shears while his daughter…whose name I neglected to write down and apologize to her for my error… at the head and Alice, on his body, help steady the alpaca while Joyce stands ready to capture the fleece. In the left background, two other alpacas watch the proceedings and wonder how they can manage to escape such a dreadful, embarrassing ordeal.

It was a great day but, then, any day spent in the company of like-minded people, with animals…and fiber animals at that!…is a great day. At times the skies spit a little rain but the alpacas were perfect gentlemen and the worst behavior we saw all day was a whole lot of crying, moaning and groaning going on. You see, the gents were SO unhappy at the undignified manor in which they were sheared…feet tied at either end and then stretched, somewhat reminiscent of long ago days and the medieval practice of putting folks on the rack. Truly, it wasn’t as bad as it looked but the way the boys were carrying on, one would have thought they were being tortured.

Miss Innie, at 97 the oldest person watching, said, “just like a man, can’t stand much of anything!” We all laughed, partly because it was funny and partly because it’s a bit true. Miss Innie still drives, does yard work, cooks and all those other things that keep one going strong. She fully expects to make 100 and there’s no doubt she will and be as much an inspiration then as she is now! 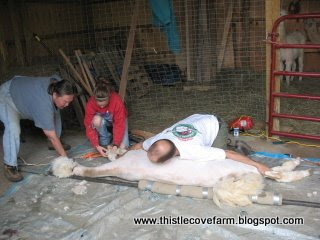 Mike, stretched full the length of the alpaca, steadies the animal while Mary prepares to release the leg ties. 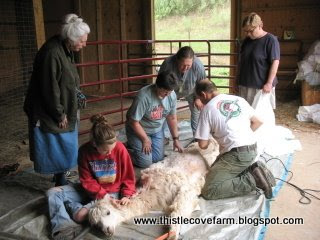 There are two types of alpacas, Huacaya and Suri. and both are members of the camilid family and Mary has both types. More than eighty percent of alpacas are huacaya with full, beautiful fleeces. Suri alpacas have the lustrous, pencil type fiber hanging in dreadlocks, making them similar to each other yet still different. Both are incredibly beautiful with lovely fleeces that hand spinners adore. 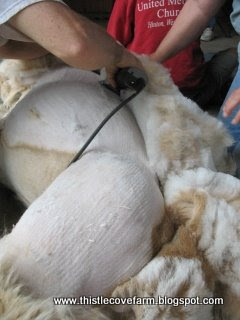 This photo shows how well Mike is shearing the “blanket”, the most desirable portion of the fleece. It also shows how delicate, yet well muscled and tiny, is the alpaca. 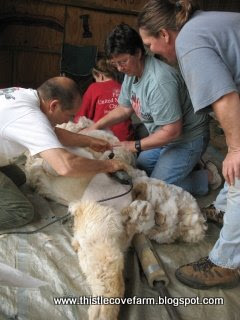 Mike, shearing, while Mary watches as Alice steadies the animal and daughter gently holds the head and neck. 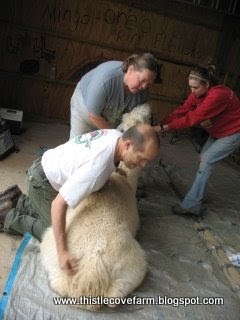 Mike, Mary and daughter turning the animal so it can be sheared on the other side. 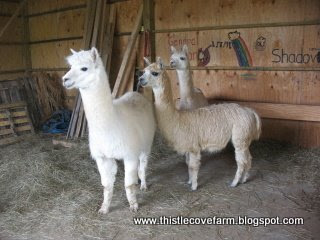 Oh dear. One alpaca has been sheared, another is on the shearing floor and these three fellows watch in trepiditation. They must be commended, however, as no spitting was seen, at all, during the day. No humming was heard either but plenty of moaning, groaning and general wringing of hands, so to speak, as mentioned earlier. 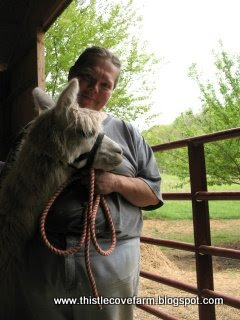 Mary, and one of her beloved boys. If you want to know the character of a person, watch them around animals. If the animals are calm, gentle, serene you know it’s, generally, due to the calm, gentle, serene treatment given by their human. Although the gents were distressed at such “terrible treatment”, they bore it well and, throughout the day, were steadfastly calm, gentle and serene. 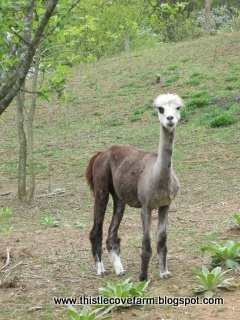 This little beauty reminds me of a 1950’s sci-fi movie made somewhere in New Mexico. Like sheep, alpacas do better, much better, when they are kept in excellent health. Keeping them in excellent health includes shearing, appropriate meds and vaccinations and pedicures. It’s much easier and less costly to keep them healthy as opposed to getting them well. It’s also much easier on the human as the wear, tear and stress can be overwhelming, on both, during an illness.

It was a beautiful day, filled with laughter, fun, teachers and students, in the company of like-minded people who enjoyed themselves and each other. It was one of those days we’ll talk about for a long, long time.