The most recent months s have been fraught with problems. I refuse to use the word “issue” as it always makes me think of the New Testament woman with the “issue of blood” who touched the hem of Jesus’ robe.

First the Honda’s complete and total exhaust system needed to be replaced. Yes, that’s correct, from stem to stern the entire thing had to be replaced…muffler, catalytic converter and whatever else goes with an exhaust system. At the same time, the Polaris Ranger stopped working so for a few days, I was hauling hay in a wheel barrow from barn to hay hut so the beautiful beasties could have their groceries. In time, the parts came in for the Honda and Rick’s Auto (hurrah!) got it up and running and returned just in time for it to be used as a Hay Wagon. (Poor ole Dave would be rolling in his grave if he knew!) For two weeks the Honda Hay Wagon was in use with four bales of hay stacked in back, carefully, giving Honey a bit of room to squeeze in front of the hay. Bella, being smaller, jumped into the car as shotgun. 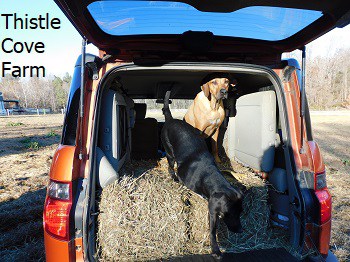 So, for a couple of weeks, square bales were put out using either the wheelbarrow or, usually, the Honda and it was Happy Days when the Ranger returned. 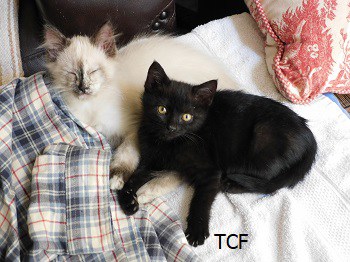 On the homefront, Tuppence and Smudge Moonbeam are besties and Smudge is beginning to use her damaged right leg and paw a bit more. The damage is consistent with being thrown from a moving vehicle and my mind boggles! When I took her to the vet to be examined, the vet (whom I’d never seen before) wanted to do a lot of what I call “upsell”. She wanted to do tests for this and that and I said, “No, examine her leg and paw, give her a rabies vaccination and we’ll be back in a few months so she can be spayed.” I don’t do a lot of extras; with a total of 23 mouths to feed, twice daily, the cats get basic care…spay or neuter, rabies vaccination, food, water, shelter, a lot of love and that’s all. The vet wasn’t happy but unless she wanted to do some pro bono work, we were at an impasse. I’ve since found out Tuppence and Smudge, both foundlings, may be spayed at the expense of Southside SPCA. Hurrah! Tuppence was spayed today, costing $38 because I also paid for a pain controlling injection. I don’t believe pain meds are usually an option but that’s a trifle barbaric, I do believe. The other thing the vet said, after squeezing Smudge’s paw in a grip that saw vet fingers go white, and me saying, “HEY NOW, that’s enough!” was, “She’ll probably have to have her leg amputated.”
OH NO! None of that talk because IT AIN’T HAPPENING. I’m no vet but have had cats longer than the vet has drawn breath and I know, beyond shadow of doubt, if Smudge’s leg is amputated, she’ll never have a chance of recovery. With her leg intact, there’s always hope and with hope, prayer.
Now, a few weeks later, just today, the day after Boxing Day, I noticed Smudge is beginning to use her paw as it should be used…weight flat on the foot pads. Until now, she’s been sliding along the outside edge because the leg wasn’t strong enough to hold her weight. With prayer, good food and the rough and tumble with Tuppence, I am Very hopeful she’ll heal correctly and totally. As I’m typing this, she’s playing alongside me, sometimes on me and her mojo motor is purring mightily!
Tuppence is on my bed, curled in fuzzy blankets where she’ll stay until the dogs and I go to bed then she’ll be put in the cat carrier to finish sleeping. She was spayed at a different vet clinic and they put Tuppence in a onesie to keep her warm and protect her stitches. I was told the stitches are dissolvable but I could bring her back so they could remove them but what I’ll do is remove them myself. I have Dave’s Army field  medical kit and this won’t be the first stitches I’ve removed (and that includes removing them from my own body). By the way, Tuppence has since removed the onesie and it’s not yet been found. 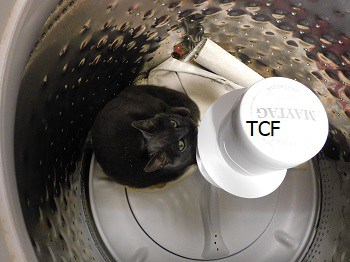 My household is chaotic, cozy and full of adventure and it pays to go slow and be extra vigilant in all things. Yes, that is Grandma Bones who was napping in the washing machine. I’d thrown a few hand towels inside, gone to retrieve other laundry and Grandma decided a nap was in order.
There was sadness because Summer, my Belgian mare, died and that assisted in my spiral into depression. Autumn is difficult; so many people and animals have died in Autumn and no matter how I struggle, the grief depression is simply overwhelming and exhausting. It came to me this year, when depression comes, I go to ground for as long as it takes. Meaning, I hide on the farm and try to see no one, go anywhere, do anything other than tending to the animals. Then, when depression lifts and I return to the Land of Outside, I make some excuse without actually saying, “I’ve been depressed”. This is the year I’ve stopped making excuses and have simply said, “I’ve been battling depression and the way I fight it is to stay home, dig deep into God’s Word and tend to myself.” Mouths have dropped while some have understood, others have not and the lifting of the burden has been marvelous.
October end found family and friends celebrating parent’s 70th Wedding Anniversary! and Mom’s birthday. The black and white photo on the table is a copy I made many decades ago in a VA Commonwealth University darkroom and is their original wedding photograph.

Thanksgiving, Christmas and Boxing Day have come and gone in weather more like summer than winter. The first two were very pleasant and Boxing Day was spent in church services in the morning and an afternoon nap. Most of last week, two teenage boys were here working in exchange for fishing and riding privileges. I felt honor bound to keep up with them and was going to bed at 7 p.m. in an attempt to keep going. A lot of work was accomplished and I’m hoping to keep up part of the momentum this week. Then again, I should probably fixate on the house chores, finishing up end of year paperwork and helping parents with their paperwork.
December also saw Sam Mobley come with his Mini-Skid Steer and clean driveway and all fence lines of brush overgrowth. He keeps telling me, “Now you can mow behind the fence lines” and I keep replying, “Actually, you can come back next year and do it all over again. I’ve got enough actual work and don’t  need more as long as you’re available.” For now, we’re at an impasse but when summer arrives… 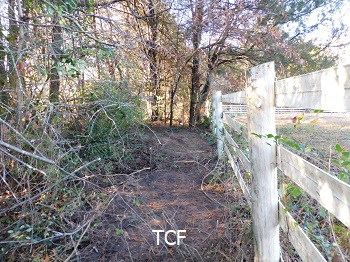 There’s not a lot of Christmas un-decorating to be done because I don’t decorate much. The horse wreath Gina made is on the front door, fairy lights twinkling merrily and the Christmas tree Daniel made stands sentinel on the front porch. I always have such large plans for decorating then decide if I get the place vacuumed that must count for something, eh? Besides, with KITTENS, decorating is rather a losing battle and I’m to the point when I hear a crash, I no longer flinch. I’m used to seeing Tuppence climb up the lampshade so she can batt the lightbulb or Smudge knock over a deep pile of books. 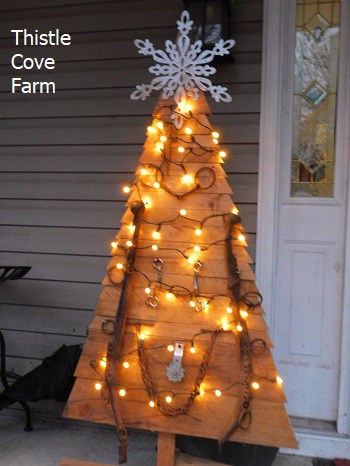 The tree is made of oak and the decorations are old horse and draft horse tack with a fence do-lolly thrown in for good measure. The fairy lights both twinkle and are solid glow and on a timer so I can go to bed with good cheer lighting up the porch. I’ve got a photo of the horse wreath but can’t find it and need to ready myself for bed so will show it later…it’s dandy though…a silver ribbon, faux greenery in the shape of a horse head and fairy lights. I’m really taken with fairy lights and have more to add to the studio, maybe the back porch…maybe my bedroom.
or not.
The following is how I beat depression; I Pray, read God’s Holy word, Love on my animals and pile on the Goodness. Happy Christmas to you and yours and if you ever want to talk, I’m a good listener.
XOXO,
Enjoy some wonderful [Christmas] goodies…
My English Country Cottage, here
The Woman That Farms, here
My favorite carol, In the Bleak Midwinter, here
Fellowship for Performing Arts, here
Handel’s Messiah, here
The Duchess of Cambridge playing For Those Who Can’t Be Here, alongside Tom Walker, here
Share
Pin
Email
« Sabbath Keeping – loneliness
Yes, aren’t we all? »