Dewena, at Dewena’s Window, is a huge fan of Faith Baldwin whom I’ve never read. FB was a friend of Gladys Taber who is one of my favorites and today, on Miss Baldwin’s 128th birthday, Dewena posted a poem.

“I have come back to quiet ways; to

To primrose dawns and lamplit,

To mending bag, to laughter, and old books,

To loud-voiced clock and table laid for tea

And that brown urchin of a dog who looks

From sandwich plate to mistress,

In still simplicity of gentle days,

This house, the love within, lean to bless

And hold our feet upon the homely ways.”

In a place deep within me, this resonates; does it with you, as well?

My younger days were filled with madness, born of uncertainty and insecurity, living in an attempt to fill a void waiting to be filled by God…only I didn’t realize it. Thankfully, God waited and, in His time, He brought me home again and in due time, God used me to lead Dave home. You’ve heard that story…how Dave made his peace with God on Monday morning at 10:00 and on Saturday morning at 10:00 he dropped dead, literally, of a heart attack. As Scripture says, “Today is the day of salvation” and I say, “Please, don’t put it off!” (For some reason, I felt compelled to read this post, my eulogy for Maxine, my dearest friend.)

For more than the past three decades I’ve been a homebody and the happiest of those years were with Dave. I’m still content to be a homebody, to tend to the needs of animals, family, friends and self; to keep myself to myself. My bookshelves are full of well loved tomes, the knitting basket always contains a shawl or scarf or wrap or hat (which are almost always given away). Well before dark, nightly, the outside chores are done and we’ve (some cats, both dogs and myself) are settled for the evening, content to allow the world to turn in orbit. We live by the seasons, in turn, and relish them all. Well, maybe not summer as much as the others; summer is just so dang hot and humid!

As she cowered by the road side, Tuppence cried piteously. She was cold, shivering and frightened with absolutely no idea how she’d arrived at such a place. The last thing she remembered was being cozy and warm, nestled against soft fur. She was too young and unprotected to be here, and if her mind had been developed enough to not only suss it all out but to wonder, “What next?” she would have sussed. As it was, she cowered; shivering, cold, hungry, alone.

Things were whishing by. Big things. Huge things and, suddenly, one stopped. Tuppence began crying harder, in fear, in hunger, in cold. She was picked up and her few ounces hardly registered as she was nestled in a piece of soft cloth and soft murmuring began. She didn’t understand the words but they comforted her and, suddenly, she felt a teensy, tiny bit of fear leave. But not the hunger. Oh no, not the hunger. When had she last eaten? She wasn’t sure and couldn’t remember but if she didn’t eat soon… She was growing weaker as the empty place grew larger beside the fear, cold and uncertainty. 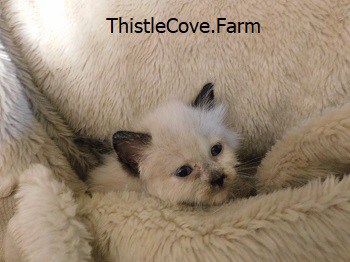 After a long while, a very long while it seemed! Tuppence felt something hard pressed against her mouth. She began to squirm and mewl in earnest but was too small and weak to fight. All of a sudden, liquid warmth began to trickle into her mouth. Her mouth opened as wide as her eyes as she gulped eagerly while the kitten milk replacer dribbled into her mouth and down her chin. It didn’t take long before her insides were full and warm and she began to refuse the syringe full of milk. Her round, seriously blue eyes began to close and her body became limp as she surrendered to sleep. The woman placed her gently onto a towel inside the wire cage at the shelter.

This would continue for three more days until another woman came to the shelter to do something called “foster”. Tuppence began mewling as soon as she saw this new woman. It was easy for the woman to believe Tuppence was saying, “Hello! Please take me home and care for me. Please love me!” In reality, the four week old kitten was saying, “I’m cold, I’m lonely, I’m hungry.”

The woman did what she’d been doing for more than fifty years. She nestled yet another kitten in a bit of soft flannel cloth, stuffed the bundle in her shirt and went home. At home, a cat carrier was prepared with soft towels and placed on top of a heating pad turned on low. The back and middle of the carrier was on top of the heating pad but the front was not. This was so the kitten could have both warm and not warm places to sleep. A rug was placed over the carrier to keep in warmth but, at the front, Tuppence could see the household and they could see her. Bella and Honey, Very Large dogs were interested, as were some of the cats, but Tuppence was never left alone outside the carrier.

Her mornings began with syringes of warm milk but soon was needed a larger syringe. She would drink two or three five mls of milk, rest a short while, then demand more. Throughout the day, about every three hours, she was fed and twice during the night. She was also given small dabs of Viralys (it seems the woman keeps a number of things on hand in case of emergencies) to help develop a healthful immune system and she enjoyed this as much as milk.

After each feeding, she was rubbed with a very warm, wet cloth to both clean her and help her void her bladder and bowels. This is what her mother would have done by licking but the woman drew a line in the sand at that!

All of this took place with Bella and Honey giving rapt attention. The other felines having either seen it all before or having gone through the process, ignored everyone. After all, a cat believes if it’s not someone tending to their personal needs, it’s not worth notice.

A week later the woman, bleary eyed and stumbling from interrupted sleep, bought very expensive cat food in tiny portions in the hope Tuppence was ready. From past experience, the woman knew if she bought normal sized cans a portion would be wasted or fed to the dogs. The woman would worry later about weaning Tuppence off wet food to dry kibble.

A small metal dish with sides was found for the wet food and a small baking pan purchased at the thrift store for a litter box. If Tuppence was ready for wet food, she was ready for a littler box. The woman hoped. A black marker was used to write LITTER BOX on the pan so it would never, mistakenly, be used otherwise. shudder! 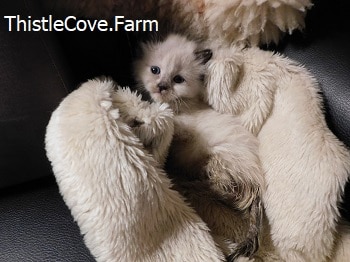 All was ready for Tuppence to move to the Big House, otherwise known as a large, wire dog crate. The litter box was placed at the rear, next was placed the food dish filled with wet food, then a very soft, fuzzy blanket, then Tuppence. Filled with righteous indignation she let her displeasure be known at being put inside the crate but then her little nose picked up the scent of food!

She wobbled to the dish, took a deep breath and stuck her face into the food. Success! Tuppence was ready for wet food and began eating with great enthusiasm. When the food was mostly gone, she sat back and began washing her face. More success! She stretched, looked around and noticed the litter box. Cautiously, she investigated, one tiny paw pushing the litter around in the box then instinct took over. She clambered over the side, took up position and eliminated. Hurrah! Total success and all very good signs Tuppence would grow into a very pleasing cat.

The woman was extremely grateful indeed! Now, she could sleep the night with only one potty break for the dogs. Well, okay. For herself as well but at least she wouldn’t have to heat formula in the middle of the night. She could fill the kitten’s food dish, say good-night and warble off to bed.

Which really isn’t the end. It’s a new beginning. 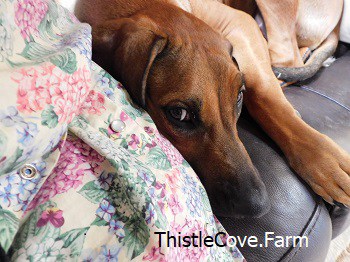 May the good Lord keep our spirits all. Amen.