After I post this, I’ll begin answering your kind comments left lo! these many months. As you read, you’ll begin to understand. Also, there’s some glitch with adding photos so those will be added later. Hopefully. If you’d like to catch up March, April, May, June, July, and now August be sure to sign up with your best e-address so you may either commiserate or laugh at my exploits. (haha) Finally, if you’ve noticed my sporadic absence on fauxbook, it’s because I’ve been identified as a granny age woman who might be instrumental in the rebellion so they’ve put me in fauxbook jail five times since the year began. Seriously. With all the stuff happening in the world, I’m deemed a threat. As someone told me, “You’re absolutely a threat because you’re a truth bringer and “they” don’t like truth bringers.” Welp. I’ll take that as a compliment, ta very much!

It’s been so long and much is the thought I’ve put into how to jump back into posting. There’s no good way except to just begin and to begin is to tell of more hardship. A few short days  (two) after Sadie died, “Black Winter” hit my part of southside Virginia and the storms were fierce! At the other TCF location, we had plenty of bad weather and the first January (1996) Dave and I saw 35 Degrees F below zero (around minus 37  C) brrrrrrrrr on the back porch. This was when we had no walls but, planning ahead, we’d put in R19 insulation covered with 6 ml plastic. It may not sound like much but when those frigid winds blew down the valley, hitting our house at the top of a knoll, it was enough to keep the candles from blowing out. Usually. The wood and coal stoves were kept hot twenty-four hours, seven days a week and we learned to be happy when the inside temps got to 50 Degrees F above zero because our milk and coffee didn’t freeze in their vessels.

Because I was grieving over the deaths of Sam P. Spade Secret Agent Angel, Hattie Cat and Sadie Beau Hunkous I wasn’t as prepared for the storm as I might have been. Certainly not as I should have been. Fortunately, this house has propane gas logs and kept the house warm enough. Not hot, mind you, but warm enough. In the bedroom, I piled on wool blankets (thank you very much my sheep!), slept in flannel nightgowns, camisoles, cashmere socks and a hat on my head. Have you seen those old drawings of Ma and Pa both wearing something similar to stocking hats on their head? Those hats keep body heat in and the cold out and who cares what they look like! There were no dogs to share my bed so the cats fitted in around me and we were all thankful for each other’s body heat.

Little did I know the next nine days were going to be spent keeping bodies and souls together the best way I could. Oh, and almost forgot…a neighbor delivered their horse to my farm because they had yet to build a fence for him at their new places a couple of miles down the road. Levi, said horse, was delivered Thursday afternoon, just as the first of ill weather was setting in. A brittle wind with lashings of icy rain, more ice than rain, was his welcome and, while my two horses were interested, the nasty weather kept everyone from fighting. (Note to self…remember Dave’s admonition, “No good deed goes unpunished.”)

As the storm’s strength increased, the cracking of trees and branches could be heard. I knew the Bradford pears lining the driveway wouldn’t do well as they have a lifespan of about twenty years and were already at twenty-one years. For the four years I’ve lived here, each winter…heck, each hard wind…saw more branches breaking away from the tree body until some of them were pathetic looking. I’ve done my best to keep them trimmed, prior to the storm, but this storm was sure to finish them off.

There is a house generator but it didn’t come on automatically, as it should have done, so I manually flipped the on switch and the sweet noise of that big beast rent the air. That conundrum  of why it wasn’t automatically working had to wait because I needed to tend to animals and myself, should any energy be left over. I gathered my old camping gear – Coleman camp stove, Coleman lanterns and bottles of water, put together a bedside potty chair (to be used during daylight hours outside or in the barn), wipes, made sure flashlights had batteries, put a five gallon bucket under the barn roof to catch run-off water (to “flush” inside toilet when used during the night) and would sit in my car to charge my mobile phone battery. OH! Didn’t I mention? The landline went out at the first hint of ice and stayed out for ten days. The well, fueled by electricity, wasn’t working so I put five and three gallon buckets into the Ranger bed, drove to the pond and dipped water to carry to the horses. A horse can drink thirty gallons of water each day and I was feeding and watering three horses. (Yeah, it would have been lovely had Levi’s owners volunteered to help, eh?)

All the aforementioned happened Thursday, Friday, Saturday and Sunday morning the generator went off again. This time there was no resuscitation so I went in search of a neighbor who could possibly suss the problem. I found Brandon, in my driveway, using his chainsaw to cut up the fallen trees so I could drive off the farm and I am still humbled by his kindness. He finished cutting, I helped clear and eventually we went to the generator but were both stymied. I called JW, my electrician nephew, for his input and he suggested checking the oil (which tells you just how exhausted I was as checking oil never entertained my brain cells!). We finally found the dip stick (why does it have to be hidden?) and it was bone dry which made no sense at all. I just spent a lot of money on servicing and it’s out of oil??? So, we added a gallon of oil, flipped the switch and, again, the sweet noise of massive machinery spilt into the air.

Throughout all these days, cats and horses are being fed and watered while I’m surviving on protein bars and water and glad to have both! The generator worked, for a couple more days, and JW sent a text and photo “portable generator on sale Thursday morning, only have 12, open at 8”. Needless to say, Thursday morning I was in town where they had power (!!!) so I slavishly enjoyed a Hardees country fried steak biscuit (hey! no judging!) with large HOT coffee and was sitting outside the store at 7:30. I saw someone going in so I called; yep, they’re open so come on in. I can’t remember but might have had my credit card in hand as I approached the counter. “I’m here to purchase one of the portable generators.” The man grinned and said, “You’re the first one” and picked up the ringing telephone. His side of the conversation was, “Yeah, we’ve got 12″ and I’m waving my credit card…”NO, you’ve only got ELEVEN!” He grinned at me and corrected, “Yeah, we’ve got 11 and they’ll be in at 2:00. No, we won’t hold one unless you give us a credit card number now.” Again, I’m waving my credit card…take my money, PLEASE TAKE MY MONEY!

He, grinned, took my money and said, “I had you covered, no worries (little did HE know!) so come back at 2:00; that’s when they’ll be delivered.” I went home to do chores and waited, somewhat anxiously, for 2:00. I drove the truck so the generator could be loaded in the bed and while driving home, Ronnie called. “Mrs. B., did you get the generator? Great! I’ll be over in a few minutes to hook it up.” He almost beat me home and while I gathered extension cords, Ronnie unloaded, unboxed and filled the generator with gasoline. While he hooked up extension cords, I retrieved the small microwave from the studio…a HOT meal was in my near future! Who cares if it’s a packaged pot pie?! 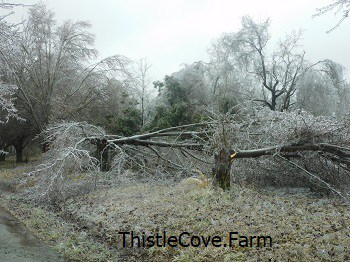 The generator, on a full tank, runs for 13 hours…BLISS! meaning I can top it off before bed then sleep all night! Thank you God! The first time it needed refueling was not a treat. I’d love to smack upside the head the elected government EMPLOYEE deciding the old five gallon fuel spouts were “dangerous”. IDIOT! What’s dangerous is trying to balance the five gallon fuel container while navigating the intricacies of the “new, ” spouts. NOT POSSIBLE! I poured gasoline over my shoes, my pants and I’m pretty sure my jacket and I know for sure all over the generator AND on the concrete apron (NOT good!). Somewhere around day 7 (but don’t really know because February is, , a blur) I went to visit Mom and Daddy. They only lost power for an hour or two (God’s blessing AND gift!) and had no idea the hardships I’d been enduring. I saw no need to tell anyone…why complain and I figured everyone else had their own battles. Anyway, Mom told me about a battery operated fuel dispenser she’d bought my sister and when I asked Stephanie about it, she gave it to me. 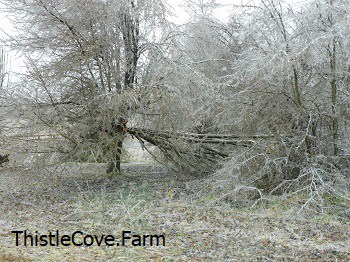 WORTH ITS WEIGHT IN GOLD is that battery operated fuel dispenser! One end goes into the five gallon container of gasoline, the other end goes in the generator fuel container, push a button and swish the fuel flows! MY OH MY! Where has this been all my farming life?

The saga is now up to Wednesday, a week after the ice storm began, and I’m living the high life. During the day, huddled next to the propane gas logs, heating food, coffee and hot chocolate in the microwave and sleeping under wool blankets at night. Thursday and Friday, more of the same and Saturday morning I called Max, another electrician, to come to my rescue. Max came and determined the house generator was not worth scrap and needed to be replaced. Of course, there was excitement when he turned the thing on and it back generated (my words, not his) to the house and, had we not been able to turn it off quickly enough, might have blown the house sky high. Max figured out why the HVAC system wasn’t working, was able to fix that problem giving me HEAT! The landline wouldn’t be fixed for a while…Century Link isn’t good about fixing spur lines…they, like all corporations, work on keeping the most people happy and a couple of dozen folks on this road doesn’t represent the majority.

Pretty much, this is the first two weeks of February and I’m happy February is a distant memory. How was your February and don’t forget to sign up for more Thistle Cove Farm adventures as they seem to be non-stop. (wry smile)