Over the last quarter century, when I’ve ventured off the farm it’s usually to the grocery store, the feed store, the post office, the library, the gas station or church. Now that I’ve moved closer to family, include family as well as a yearly vacation. My routine varies in that I may not go to each place each time I leave the farm but it’s still much the same. I’ve been listening to people talk about self distancing due to the virus and, have to admit, it’s often amusing. The same people who said, “I’d love to stay home and ______” are now moaning and groaning about their routine being disrupted. 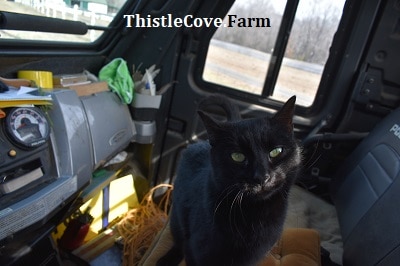 While I’m doing chores, Inky likes to ride in the Ranger. He comes when called, jumps into the vehicle, says hello, then paws on the dash, looks over his kingdom.

My routine is the exact same about 300 days out of the year; feed the cats and dogs, feed myself (coffee), read the Bible, dress then go to barn to tend to barn animals, come to the house and eat breakfast then get started on the to-do list. My hay stash is being depleted but I should have enough for not only this year but headed into the coming winter. This is a good thing because my hay man uses the same Mexican crew, and has done for years, but who knows what’ll happen. It’s the same with the human food supply; so much of our food is grown overseas…South America, Central America, China, etc. and I think it’s time we, as a country, got back to feeding ourselves. I support the local farmers’ market and earlier this week bought a mess of greens. Those will be fixed tomorrow with sauteed onions, bacon, balsamic vinegar, s&p and garlic…a fine, fine meal!

I readily admit I’m a simple soul and these bring a smile every time I see them. It’s a very inexpensive tin bucket filled with fake flowers. They aren’t even silk, simply cheap, fake flowers stuck in a tin bucket on the barn door. 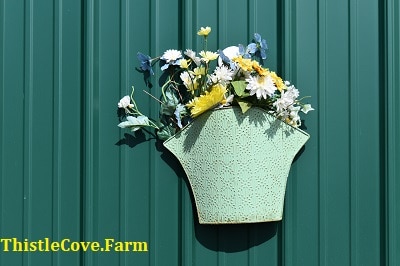 My hay supply is now stacked in the barn but so high, it’s sorta dangerous. I started out using the metal electrical pole but, as you can see, that wasn’t a good idea. The pole bent when I tried to stop a hay bale from falling on my head but, thank God, all I got out of the deal was a twisted muscle. 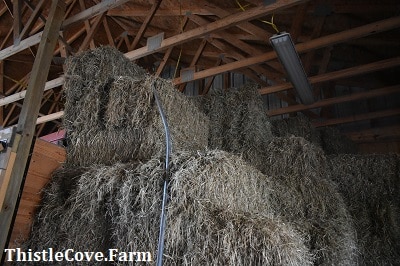 Yes, the bales are stacked to the rafters and, after bending the pole, now I just climb up there and throw them down. The barn cats like to walk the rafters and when I’m up there, they look at me like I’m invading their space. oops! Social distancing barn cat way, eh? 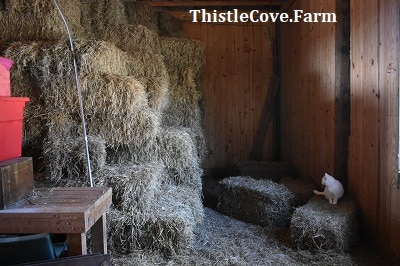 Mellow Blanco came to help so I stopped throwing down bales; no need to cause deliberate injury to woman or beast. 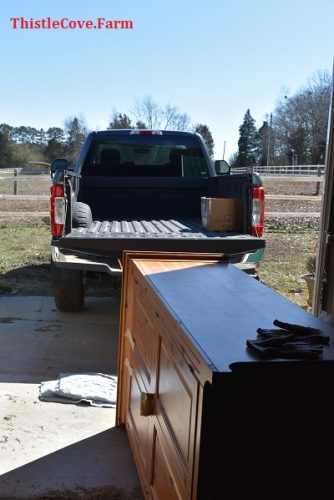 My nephew was going to take this armoire/media center to the thrift store but I asked if I could have it; it’s nice enough for the house but don’t need it in the house so to the tack room it goes. It stayed on the back of the truck for a couple of weeks before I unloaded it in the barn. It’s solid pine on three sides and was tricky to unload but, as the feller said, “I got ‘er done!” lol 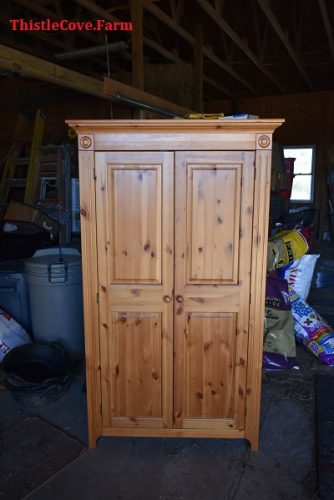 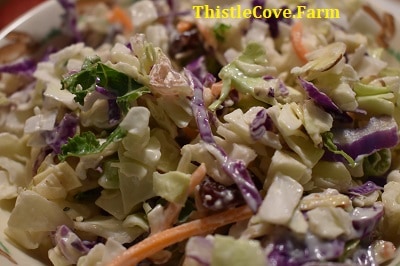 and hamburger stew with potatoes and a tot of sour cream. Actually, I had this for a couple of nights and the dogs enjoyed some of the gravy over their kibble. 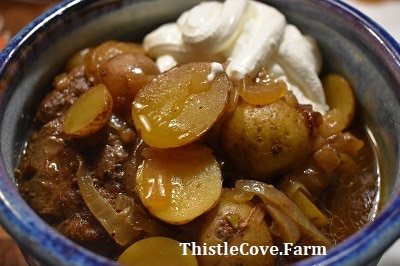 This morning I took neighbors a bag of mixed greens purchased from Fred, a neighbor on a different road. His garden is still going gangbusters so, weekly, I purchase whatever greens he has to offer. In return, my neighbors gave me some fresh brussel sprouts: 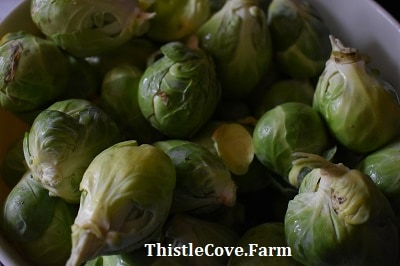 This afternoon I baked two apple cakes and brown soda bread; plan on giving one cake to my sister and will split the other cake between myself and neighbors. I’ve already given one quarter of the bread to a neighbor and slathered one quarter with butter and molasses as a treat for myself. 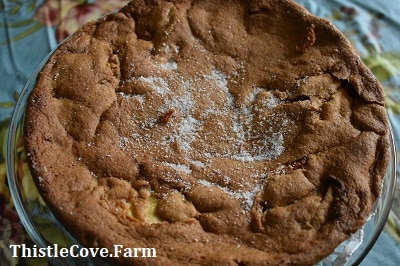 The apple cake; when I turned the cake out so I could flip it, I put a bit of white sugar on the dish so the cake wouldn’t stick. 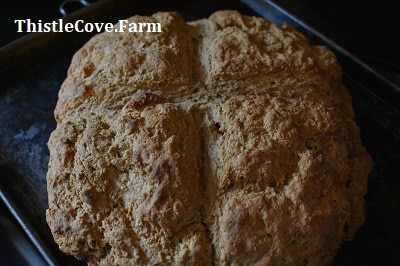 This is the brown soda bread made with molasses and buttermilk; it tastes rather good with butter and a bit of molasses or honey atop. 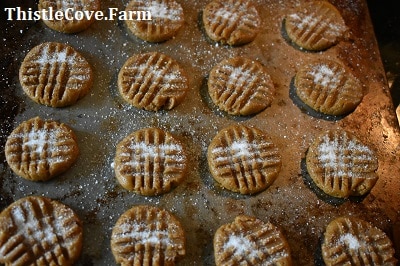 Earlier this week I made ginger cookies for my parents; their house is still topsy turvey and a mess while construction workers put it back together. My parents are troopers; living midst the construction, eating microwaved food on plates balanced on their laps. I bought them an electric kettle so they can, at the very least, have instant coffee in the mornings. The worst part is over…those LOUD LOUD drying machines, dehumidifiers, etc. I’ve been there, done that as some of you might recall and it was NO FUN. They were told things would be back to normal by end of March/first of April and I think that’s wishful thinking. My best guess is mid-April and wouldn’t surprise me to be a week longer. Not only did they lose 5 rooms but the basement ceiling fell and most of the walls had to be removed as well.

Are you beginning to see why this post is only full of same old same old? <g> Right now, it’s Katie bar the door, all hands on deck and do the best we can while not being more overwhelmed than possible.

If anyone is interested in any of my recipes, let me know and I can do a post but you should know…I consider recipes suggestions. Even baking recipes that “real” cooks say (in fake German accent), “You MUST follow exactly!” (think Colonel Klink). Ummm, not so much but it could be I’ve been cooking and baking for so long I can, pretty much, know what the ingredients will do once put together. I submitted recipes to Harrowsmith magazine, they were accepted and published not only in their magazine but also in their book. Dave laughed and said, “Did you actually make those recipes before you submitted them?”

Well, not exactly, but, their kitchen staff tested all the recipes submitted so they had to work. Right? lol A recipe I did make (7 Grain Cereal Muffins) was accepted by, I think Good Housekeeping, and they paid $250.00. I must be doing something right, you think? lol

By the way, Harrowsmith was re-released this month and it’s as fine a magazine as you’d need for the homestead and highly recommended!

That’s about it and time for bed for another busy day tomorrow. I hope you’re weathering the current storm with grace, dignity and caring kindness. The world has rather gone mad, more so than usual, and staying home has never been more welcome. Make the most of it. 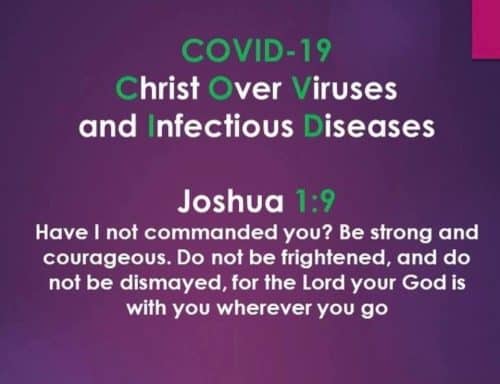