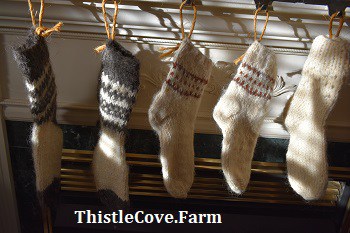 To be sure, at some point in time, store bought stockings were hung at Thistle Cove Farm, but not lately. Lately it’s more the hand knit variety, purchased from far flung places such as Romania, Hungary, Ukraine to be used as “stockings were hung by the chimney with care”.  There have been added a child’s pair of socks, red with green stripes, and they are discordant against the muted cream, brown, gray of the adult socks. No matter. 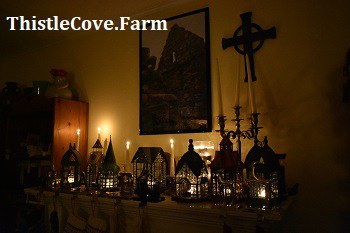 The small mantle village, gone dark, waits with anticipation, all Creation groaning with it, absolutely panting, hearing a song faintly sung (to my ear) but heard as the clanging of bells, the crashing of cymbals, the brilliance of stars, the lowing of cattle, bleating of sheep, neighing of horses, purring of kittens, snore snuffles of dogs. As we wait. 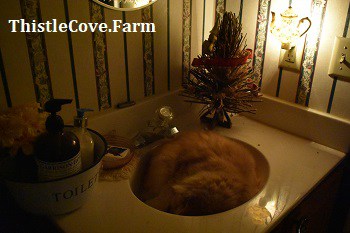 Mr. Molly prefers waiting in the sink; it’s nice and cool, the night light giving a modicum of light and said sink fits his fat body perfectly. When I finish using the loo, I go somewhere else to wash my hands. We aim to please. 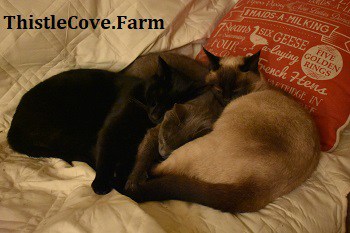 Granma Bones, already old and gray when she walked up the driveway years hence, snuggles between Inky, one of her sons, (but not sure if he’s Inky 1 or Inky 2 or Inky 3) and their sister, Pixie. Pixie is lead in her merry little band, Pixie and the Inkspots, and they play havoc, leading the rest of us in a lively chase. Inky, but not sure if Inky 1 or Inky 2 or Inky 3, has taken to meeting us in the pasture when it’s time to give hay to the horses. He comes when called, jumps into the Ranger and rides around until I deposit him at the barn where his meal, breakfast or supper, is waiting. He’s a pleasant little fellow, ready and willing to help when able but, lacking thumbs, he gifts us with his presence. 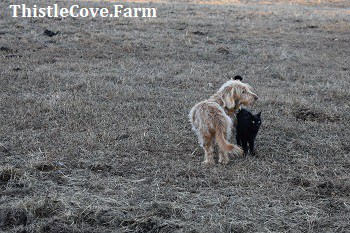 Inky, but not sure if Inky 1 or Inky 2 or Inky 3, sidles up to long suffering Sam P. Spade, Secret Agent, but only because Sam doesn’t want it known he has allowed a thrown away, then rescued, kitten nurse. That kitten is now cat and called Kit Carson who is difficult to photograph. Perhaps one day. Sometimes Sam is called Sam P. Spade, Secret Angel, and most of the kittens and cats love on him which he finds highly embarrassing, especially in public, yet he rarely growls. He truly is long suffering. 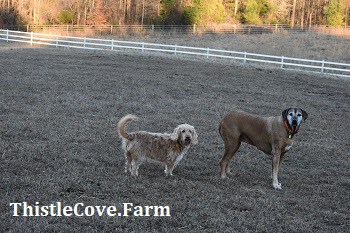 We are a quiet, gentle, genteel household. Except when we’re not but, most of the time, when sickness happens, the animals will give notice and ask to be let outside. Except when they don’t.  The house was made for us and not us for the house. Earlier this evening Sadie attacked Daisy, the small ancient Beagle belonging a mile up the road, not because Daisy is a threat but because she has a pitiful little cry that sounds like a wounded animal. Sadie, being a hunter breed, goes on the alert and for some reason Daisy was somehow rolled up in the corner of a rug with Sadie poking her long nose into the fray and all the while, Daisy crying piteously. Daisy is stiff with arthritis, and I give her a baby aspirin once or twice a week, because her human doesn’t care, nor tend, to her. Daisy daily goes for a walk with my next door neighbor who walks for exercise. This morning it was 33 and there they were…he in shorts with Daisy gamely leading the way. (They’re both nuts!)  But, to finish the Daisy and Sadie tale, I called Sadie off but she was deep in hunter mode so I grabbed a wooden yardstick and flayed her half dozen strokes. That broke her intent,  got her attention but poor Daisy was blind with panic and it took a while to calm her. After supper and treats, she’s fine now. 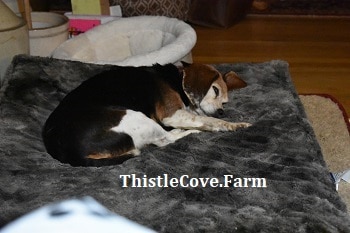 Early days Daisy learned the human at Thistle Cove Farm is a soft touch. (There’s always been an unseen unicorn flying over the farm, no matter the location and seen only to those needing food, shelter, sanctuary. A unicorn is the ‘patron saint’ of lost, wayward, foundling, rescues and Dave and I always gave sanctuary. In winter, people living down the road, knew if they broke down or the snow too deep for them to get home, they could come to the house and borrow a vehicle or be given sanctuary. The animals saw the unicorn.) The first winter here, Daisy began showing up at supper time and, after eating, settled in for a snooze. The human may be a soft touch but she’s got a few brain cells to rub together and brought in a sizable dog kennel crate so I could spend the night in comfort knowing she wouldn’t relieve herself in the house. Supper, treats, a snoozing place in front of the fire and a kennel to pass the night. A lot of people should have it so good. 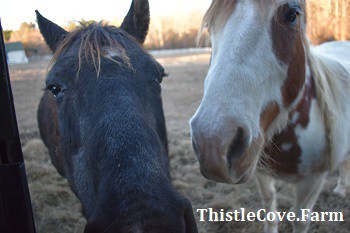 The large beasties, Tumbles, Dandy and HayJ get grain in the form of 12% sweet feed (I prefer 10% because Curly horses are such easy keepers but the 12% was on sale) then I put my skates on and hustle to unlock the pasture gate, get inside and toss hay into the hay hut. When I’m slow…I have to put up with them sticking their noses into the Ranger bed, pulling out hay and, generally, making a nuisance of themselves. They are gentle but still BIG, especially HayJ who is half Curly half Percheron. 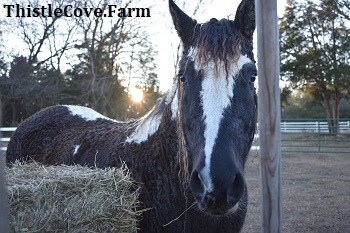 His feet are the size of platters and he’s figured out exactly how short I am and uses it to his total advantage. When he raises his head, there’s no way I come close to touching his ears, heck, I cannot even touch his chin! Thank God, I’ve never been seriously injured and only twice had owie’s; one of those times was today. Tumbles and I crashed heads together but I’m rather sure she didn’t feel anything and I am totally sure I felt everything! (Note to self…check for a lump or bruise.) 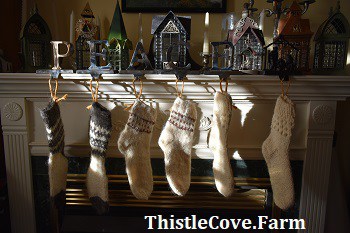 The stockings are hung underneath the village which rests underneath the photograph of the ruins of the Nunnery on the Isle of Iona. Earlier this year I visited the Isle of Iona, the home of an ancient Nunnery and Abbey. The story is fascinating and, if you’re familiar with the Book of Kells, well worth the time to read, here. 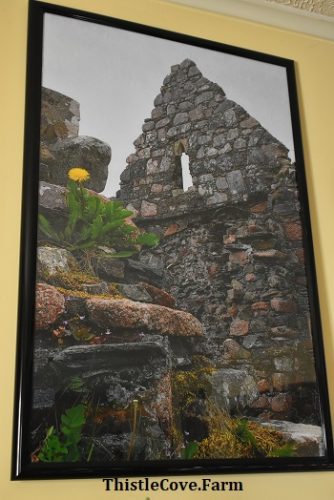 Today, the shortest day of the year, God gives us Winter. “Winter is the time for comfort, for good food and warmth, for the touch of a friendly hand, and for a talk beside the fire: it is the time for home.” ~ Edith Sitwell ~

During this Holy Season, this Holy Day, this holiday, I wish you comfort and good food and warmth; the touch of a friend’s hand, a listening hEARt, a nourishing talk and pleasing music, promises kept. I wish you time for yourself, for space to heal and to hear God’s divine and loving whisper. I wish you halycon days and star lit nights, peace and calm to find your center again. I wish you love. I wish you well.

All will be well.