The title sung to “It’s crying time again, I’m gonna miss you…”; does anyone remember that old tune? Most of the time I stay on the farm but during canning season, I rarely go anywhere. I’m tied (and tired) to the kitchen, happily so, and in winter will enjoy the work of my hands and heart.

When I was 13 years old, I found some wild fox grapes and brought a shirt tail full home to show Mom. She looked at them, asked how many more were there and then said, “Would you like to know how to make grape jelly?” That put in place a kitchen adventure that’s lasted more than half a century!

A local orchard sells pick your own or buy picked fruit – strawberries, blueberries, peaches, and blackberries. These peaches are beautiful, lush, ripe but not cling free yellow peaches so are harder to prep for canning. A peck was $20 in case you want to compare with where you live.

~ prep for next batch of peach preserves ~

Most of my canning supplies are glass as I find it easier to see as well as keep clean and lemon juice was added to keep the fruit from foaming when pectin was added. The wee bit in the glass jar was pulled aside for testing and MYOMY is it GUUUUD. Can you just imagine this peachy goodness on home made cat head biscuits with home churned butter? (By the way, I’m churning this week and am going to try and video the process. I use my Great-Grandmother’s churn and yes, I do know one can use an electric churn or a Kitchen Aid mixer but…BUT…I  have my Great- Grandmother’s churn and no one can say that but me! lol)

I didn’t use the entire peck and am going back for another peck but, to date, I’ve got about 11 pints. Or I would have 11 pints if I hadn’t started giving it away (Mandy, insert guilt trip here. LOL)

Same goes for the 14 pints of lime pickles and I believe about 12 quarts, 4 pints of tomatoes. My brother called, said his tomatoes were almost ready for picking and I could have some later this week. I’ll hope to pick a 5 gallon bucket full and can some for Mom/Daddy and me.

I frequent the farmers’ market for both food and fellowship. Some little friends, 5, 7 and 9, have a truck garden and sell watermelons, cantaloupes, tomatoes and other veggies while other adults sell produce. This haul above, plus 1 good size watermelon, set me back $8.50 which I think it excellent. The tomatoes were roasted with EVOO, S&P and fresh rosemary then put into a glass jar in the fridge to be used on pasta or bread but after having some olives, pine nuts, cheese and more EVOO mixed in. The little red onions were used in chicken salad, potatoes eaten smashed with butter, S&P and rosemary, cantaloupe chilled and haven’t fixed the beets. 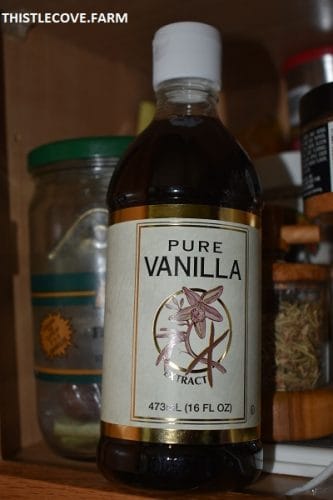 Recently, Mom and I went to a warehouse store where we each purchased what we needed. As I was getting ready to leave, I realized the employees had missed this jar of vanilla in the bottom of the cart. I returned to the register, ask the employee to double check me and he said, “Yep, you’re right” and proceeded to ring up the vanilla. He looked at me and said, “$30” (plus tax but I was too gobsmacked by the $30 to remember something as trifling as tax). I said, “I beg your pardon?” He repeated himself. I’m afraid my mouth dropped open; “$30 for sixteen ounces of vanilla?” He started to chuckle; “Yeah, it’s really gone up in price.” That’s an understatement! and my nose tells me this jar of vanilla is Mexican, not Madagascar. 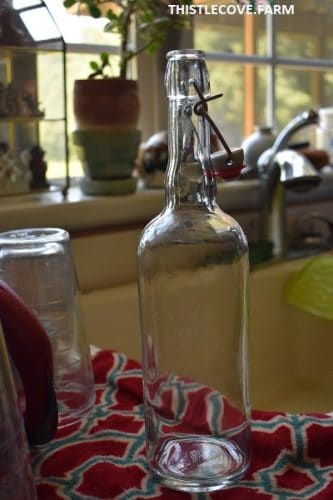 I was aware some years ago, in the 1980’s, some 80,000 Madagascar farmers weren’t receiving decent money (not even a living wage) for their vanilla beans so most decided to rip them all out and plant something else. Madagascar Bourbon vanilla beans are the best in the world; the entire world, mind you. Mexican vanilla beans are good but aren’t even a distant second to Madagascar beans in flavor, fragrance and intensity. The vines take 2 to 4 years to grow, bloom one day a year and must be pollinated, by hand, on that very same day! Then the pods must be cured for close to a year before maturing then cured for several more weeks before being sold. It’s all extremely labor intensive.

Madagascar farmers produce 80% of the world’s vanilla, receive about $1.00 per bean and vanilla bean farming can be as dangerous as the illegal drug trade. Thieves abound, both in the fields, middleman and in the market and some farmers pick early, before ripe, which means lower quality. In about 2012, the cost per kilo of vanilla beans was around $20; last year, 2018 the cost was more than $500 a kilo but that’s come down from the 2017 price of $600 a kilo. The reason…in 2017 two cyclones destroyed a lot of the vanilla bean crop.

The Livelihood Funds for Family Farming, here, has been established to help vanilla bean farmers, the corporations that use vanilla beans and to go around the middleman which will increase profits for farmers. As an aside, did you know Madagascar vanilla is a cornerstone of Shalimar perfume?

For those who use (shudder, shudder) imitation vanilla flavoring, you should know it’s made from petroleum and, quite possibly, horrible for your innards. 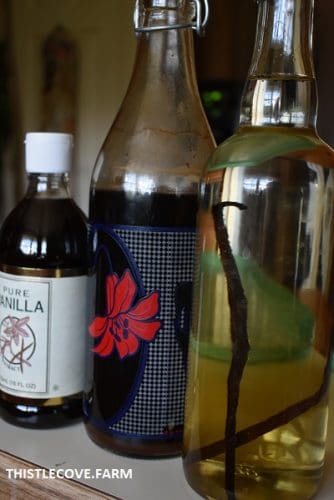 Daddy is always telling me, “If you haven’t needed it in 2 years, you don’t need it now.” Ahem. Daddy is wrong, I’m sorry to say. I’m still unpacking boxes, still packing boxes to take to Bliss, still giving stuff away (gave away a chair yesterday…bye-bye!) and to say the overwhelm is great, is an understatement. After coming home with my precious plastic (ugh) bottle of Mexican vanilla, I unpacked another box in which…TA DA! there was a bottle of my very own home made vanilla! Let me tell you, this stuff smells like heaven on earth!

I admit: I’m a plain, simple woman and I like vanilla. It’s my favorite ice cream because if vanilla ice cream can be made as it should be made, then all the rest of the flavors should be all right as well. I like sea salt caramel, double dark chocolate, butter pecan and most of the rest (except that flavor with marshmallows…marshmallows? That is insane!) but vanilla done well is perfection.

Homemade vanilla is simplicity itself.

Start with a clean bottle with lid that can be sealed.

Fill with good, not great and certainly not flavored, vodka.

Let sit for a few months or, in my case, a couple of years. 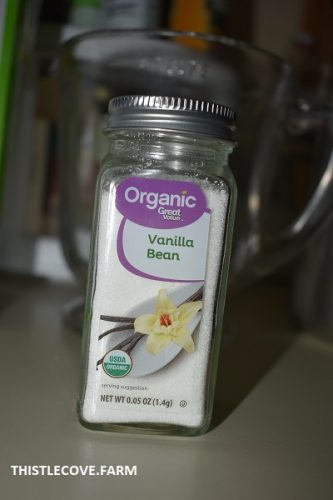 This small jar contained 1 vanilla bean and it was a little less than $12.00 from a big box store. I could have ordered vanilla beans but I had a case of hurryupitis and wanted another vanilla bean to share with the one I had on my shelf. After using the bean in the vodka, I poured sugar into the empty jar to be used to dust homemade cookies or shortbread.

For those who don’t believe in God, don’t read this bit but for those who do, let me tell you: God has a HUGE sense of humor. In another box I found…TA DA…another jar of home made vanilla! I’m laughing while dancing around the kitchen!