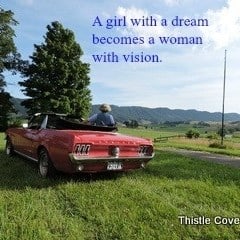 The beginning is good but that was such a long time ago so I’ll just jump in now and play a game of catch-up. For some time, I’ve been working on a new look for my blog and hired Gretchen Louise to both migrate blogspot (which was begun in May 2005) to WordPress (September 2018) and put in a new theme (Restored 316) with Genesis as the parent. (If the terminology is incorrect, it’s due to my ignorance.) Gina, a former neighbor in Tazewell County, did the logo with tweaking input from Anita (Did You Bring Your Camera blog but I can’t remember the address…note to self: ask Gretchen where my “Cozy Visits” list is hiding) and Gretchen.

I attended two conferences: She Speaks (writer’s conference) in July and Activate (bloggers conference) in September; both were outstanding and hugely instrumental in pushing me forward. I’ve mentioned before I wanted to change blog direction and it’s important to me to delve into that decision a tad more.

It’s been said when an old person dies, a library is lost and that’s true. I remember some of what I learned from Aunt Bonnie, Uncle Ray, Aunt Esther, Uncle Clarence, my parents, grandparents and so many others but it’s a drop in the bucket to what I’ve forgotten and what they never got around to telling. Uncle Ray took me ramp hunting and  taught me how to find the earliest ramps, teasing through the early spring growth, stretching for the warmth of the sun. We’d bring them home where Aunt Bonnie would fry them with sausage and potatoes and, sometimes, throw in a spring green onion or three (after all, if a thing is good, why not make it great?) They would drink sweet ice tea or hot coffee while I’d have a glass of cold milk, fresh from Belle, the Jersey cow just milked that morning. 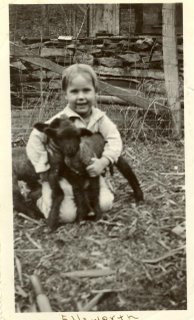 Uncle Clarence started Daddy in beekeeping when Dad was only twelve; last month, Daddy turned 90 so he’s been at it for a while. Aunt Esther taught me how to make short turns of apple butter in a crock pot and how to hunt morel mushrooms. At age 13, Mom started me canning when I found a vine of Fox Grapes and brought them home. That white grape jelly tasted so good when, as Aunt Rena used to say, the snowballs flew. 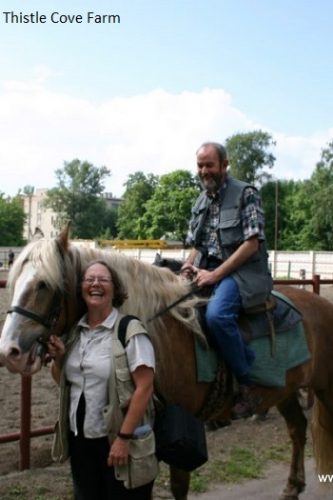 Dave and I in Russia, 2004  (“The room was always too crowded until you walked in, love as strong as death.”)

If you want to read the real beginning, how Dave and I met in Richmond, VA, click here. Fast (haha) forward six years when Dave and I bought the Appy Mtn farm in May 1995; he moved there in June, I followed in July, we married July 22 and hit the floor running. We slaughtered hogs (mercy! what a l.o.n.g. day that was!), processed them for the table but the first two “livestock” we actually bought were two Pygora (Pygmy and Angora crosses) goats for my first birthday on the farm then I moved to American Curly horses, Shetland, Romney, Merino sheep with some crosses there as well. Those sheep were used strictly as pets and for wool production, no one had to worry about ending up on the supper table (except for one ill humored ram who couldn’t get it through his thick skull that butting was totally UNacceptable!). After Dave died, I tried raising Black Angus beeves and four rescued alpacas also found their way to the farm. 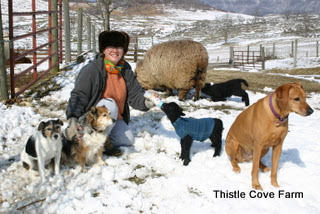 (with my pals, Abigail, Grace, Shadow and my Romney ewe and her lambs)

During those couple of decades I was richly blessed so I tried to be a blessing. We hosted The Appalachian Heritage Festival in the Cove and thousands came to see life on an Appy Mtn farm and watch as various artisans made things the old fashioned way, one at a time, with their hands. We opened the farm for Sheep Shearing Day (here, here, here) and farm tours for school children, seniors, special needs and anyone who wanted to visit a working farm. Click here for a short history of Thistle Cove Farm and what Dave and I were up to, although, truth be told, it was more me as he usually watched from the warm/cool side of the window. When we bought the farm he said, “You can do anything you want, just don’t lose too much money.” He was as surprised as I when I began making money! 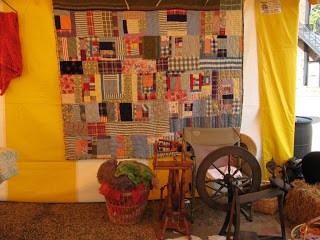 My booth at the 2007 Richmond Virginia Folk Festival when I was part of the Virginia Folklife Program. The quilt is circa 1800’s, the batting is wool.

The Lost Arts Guild was started to showcase those heritage arts of a by-gone day when folks made their own baskets, their own music, their own clothing, brooms, spun yarn, churned butter, blacksmiths had a shop, men worked in wood and so many more. “LOST ARTS GUILD Mission Statement ~ “To provide a nurturing atmosphere in which crafts-people and artists, using natural and/or organic materials may expand their areas of expertise and have a market-place to sell their wares. Further, to educate others by teaching our arts and crafts.”

Concord University allowed  me to become Adjunct Professor and actually asked, “What do you want to teach?”  I said, “How to Increase farm and Small Business Income with Agri-Tourism” and they said, “Okay. You start in fall semester.” WHOA! I scurried home, developed a syllabus and am working with a publisher to turn that course into a book for homesteaders, farmers, small businesses, etc.  My students learned how to make money by partnering and networking together to bring low impact tourism dollars into an area and increase profits for all involved. It was around that time, I was asked to go to Russia and teach the same…fabulous, fabulous trip!

This blog, predated by an actual typewritten (note: not computer generated but typed) newsletter entitled Thistle Cove Farm Epistles was started in Summer/Autumn 1995 and morphed into this blog in May 2005. (What a long, strange trip it’s been!) 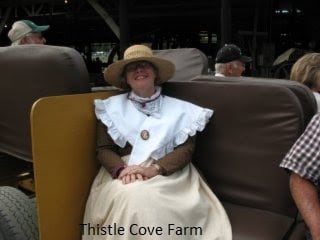 me, at Field Day of the Past

Now, it’s a different time, a different season and another change is by necessity and choice. Some of you may remember how I’ve written Dave was going to do a “brain dump” into my three-ring notebook which was our way of preparing for what we’d been told were his “remaining days, perhaps as much as eighteen months”. Those eighteen months turned out to be only weeks and I was thrown into trial by fire, learning so much about finances, wills, living trusts, stocks, how to prepare (albeit as best you can) and so very much more. I’ve bought and sold several properties, traveled to far off places solo and with others. I’ve made life changes I never contemplated nor expected but have survived it all and now, in this new season of life, want to continue to be a blessing but lately, prior to this blog post, I’ve felt, “Why bother? What could I possibly have to say that would be of any interest to anyone?” Then I look back on the last almost quarter century and think, “Not everyone is interested in all of it but some might be interested in some of it”, so, toward that end, my new blog direction will be focused on Money (how to make, save, spend, finances); Encouragement (quotes, stories…because it’s all about the stories!); farm (Thistle Cove Farm Epistles beginning to now with arts/crafts, animal husbandry, garden,); Sabbath Keeping (because who would turn down a mini-vacation every six days?); Home (wonderful eats, the sound of a chiming clock, laundry and everything else that goes into home) and what all else comes to  mind. 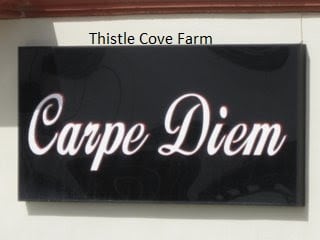 This year, it’s been my pleasure to meet some incredibly interesting people. People like Rebekah Brown of My Town Events Calendar; Kimberly Barfuss of Bearfoot Mama  (a great focus on Cesarean sections) Esther Ribbey of The Jubilee Homestead (homestead and homeschool) Sarah Titus (an incredible homeless to beautiful home story); Ruth Soukup of Elite Blog Academy, Living Well Spending Less (another incredible story of debt to such a successful business her husband quit his job to become a stay at home Dad)  Tanya of Run to Radiance (a fun quiz); Wendy at My Words For Him and so many more lovely women. And a few men (smile). 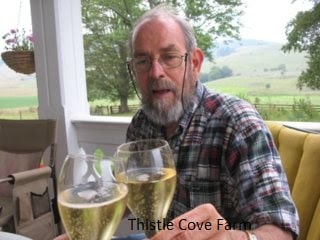 It’s been a great life but it’s now time for a new direction with new information and, just for fun, a new giveaway. Each month, beginning in November, I’m giving away “something”…it could be a piece of McCoy or Halls pottery, a tea pot, journal or book, a mug rug, something made by me, hand made bar of soap or something totally silly. A name from my e-mail list will be drawn randomly and I’ll send an e-mail to the winner. Should you choose to not receive that month’s gift, that’s fine; your name will go back in the pot but you can only do this once in a twelve month time frame. Subscribe to Thistle Cove Farm by signing up for e-mail.

Hopefully, something, or some things, are of interest. Just yesterday I spoke with a young woman who didn’t realize how desperately she and her husband need a will. She thought, “We’re young, children are little, we don’t have much.” She didn’t know should she and her husband died in a car crash, without a will, their children could, by law, be taken into custody by social services and put into foster care. It is imperative plans be put into place for your wishes to be made directives in the event you’re not here to implement them.

But. I digress (what’s new, eh? -smile-). I hope you’re still with me; I hope something is of interest. Mostly I hope you find Thistle Cove Farm to be a place of cozy hospitality where you may find sanctuary if only for a while.

“Hospitality is not to change people, but to offer them space where change can take place.” ~ Henri Nouwen ~