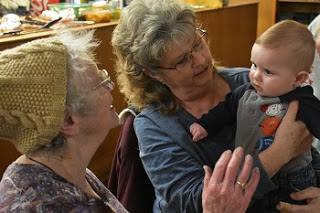 ~ Great Grandmother, Grandmother, Grandson ~
“David said to the Philistine (Goliath),
“You come against me with sword and spear and javelin,
but I come against you in the name of the Lord Almighty,
the God of the armies of Israel, whom you have defied.
This day the Lord will deliver you into my hands,and I’ll strike
you down and cut off your head. This very day I will give the carcasses of the
Philistine army to the birds and the wild animals, and the whole world will know
that there is a God in Israel.
All those gathered here will know that it is not by
sword or spear that the Lord saves;
for the battle is the Lord’s,
and He will give all of you into our hands.”
“As the Philistine moved closer to attack him, David ran quickly toward
the battle line  to meet him.
Reaching into his bag and taking out a stone, he slung it and struck the
Philistine on the forehead. The stone sank into his forehead,
and he fell face down on the ground.
So David triumphed over the Philistine with a sling and a stone;
without a sword in his hand he struck down the Philistine and killed him.
David ran and stood over him. He took hold of the Philistine’s sword and drew it from
the sheath. After he killed him, he cut off his head with the sword.
When the Philistines saw that their hero was dead, they turned and ran.”
~ 1 Samuel 17:45-51 ~
“Celebrities make a big splash
Hero’s make a big difference.”
~ Rick Warren ~

Today, at Blackstone Baptist Church, Pastor Mat spoke on John 15:12-13, more specifically, he spoke about hero’s. The world lost a hero this week when Billy Graham died. He would have been 100 years old come November and was predeceased by his wife, Ruth, when she went Home in 2007.

“A hero is someone who understands the responsibility
that comes with his freedom.”
~ Bob Dylan ~

Many years ago, in another place and time, the Sunday School teacher said, “We don’t have hero’s anymore; I believe they are passe.” I disagreed then and now and what I said was, “Are you serious? You don’t have any hero’s? How can you expect your children to have hero’s if you don’t?” (Ah, Jeremiah,” I can hear Dave saying to me. “You’ve never realized it’s all a game, you think it’s real.” Well, yeah, Dave. I did and I do. It’s as real as heaven and hell and I remain grateful you made your peace with God only 5 days before you died.) The teacher asked me, “Are you saying you do have hero’s?”

Since you asked (haha), my hero’s are Roy Rogers and Dale Evans, Billy and Ruth Graham, Jim and Gladys Bennett (yep! My parents.).

“A hero is somebody who is selfless,
who is generous in spirit,
who just tries to give back as much as possible and help people.
A hero to me is someone who saves people
and who really deeply cares.”
~ Debi Mazar ~

It wasn’t Roy and Dale’s great singing …by the way, did you know Dale wrote their theme song Happy Trails To You and she introduced Roy to the Lord…nor their great movies. It was their staying power, their choice to stay true to Jesus during the tough times life throws while we’re busy living. The shalom of God was needed when tragedy struck when their daughter, Deborah Lee, and seven others were killed in a bus accident. The shalom of God was needed when Robin, their Down Syndrome child was born and doctors advised, “Put her away”. The loving parents decided to disregard that advice, took Robin home and that beautiful, heart wrenching story is told in Angel Unaware. Roy Rogers and Dale Evans were hero’s not only to their children, families, friends and co-workers but to an entire generation who remember them with great fondness and, yes, call them hero’s.

“A hero is one who kindles a great light in the world,
who sets up blazing torches in the dark streets of life
for men to see by.”
~ Felix Adler ~

Billy and Ruth Graham are also my hero’s. Mrs. Graham’s book, Footprints of a Pilgrim, is a favorite and one I read and re-read for the wisdom and depth found therein. In April 1953, Billy Graham gave a crusade in Richmond, VA; I was three years old and Mom took me to see and hear Rev. Graham. It’s one of a handful of cherished memories I have from that era.

Rev. Graham was a truly humble man who touched millions, including every POTUS from Truman to Trump. There was never a hint of scandal attached to him, in part because he never allowed himself to be alone with a woman other than his wife or family member. (As an aside, Ruth Graham McIntyre, the middle child named for her mother, gave an incredible testimony at her Daddy’s funeral when she shared her messy life and the God who restored the years the locus had eaten.)

Jim and Gladys Bennett are also my hero’s. I’ve seen them at their best and at their worst and the memory that’s fondest and stands the test of life and time is the memory I have of them kneeling in prayer at the sofa or their bed as they called upon God for one of their children, each other, a missionary they supported and a long list of folks. Growing up, we had family devotions; we didn’t have them all the time but they were memorable when we did have them. Before every trip we would gather in the living room ~ Daddy, Mom, Stephanie, Steve and I ~ and we would pray for God’s mercy and blessings on our adventure. When we would leave Granddaddy and Grandmother’s West Virginia house, a prayer would be said and, as a summer time treat, I was allowed to go with my other Granddaddy as he ministered and preached to folks in little country churches. Every Christmas Eve my family would gather in the living room and listen to Mom read Luke 2, the Christmas story, then we would pray. Mom and Daddy didn’t just send us to church, they took us to church…BIG difference. They led, still do, by example and my life is richer, deeper and my relationship with Jesus more real due to their influence and prayer.

In their own spheres of influence, all of these people have staying power, they all serve God, they all have stood the tests of both time and God and they are all either in heaven or bound for heaven. Mom and Daddy might blush at being called hero’s but in a far more real application, day in and day out for close to 66 years, they are hero’s and their Christian testimony has touched thousands and more.

At the end of his sermon and for the coming week, Pastor Mat asked us to pray:

~ Dear God, how can I live out being a hero in Your Kingdom? ~

Please, won’t you join us?

All hero’s have super powers: kindness, compassion, loyalty, love, patience, does the right thing, listens, sacrifices for others, is gracious, shows mercy, is teachable and teaches, is respectful and so much more.

Sometimes being a hero simply means you show up.
“My belt holds my pants up
but the belt loops hold my belt up.
I don’t really know what’s happening down there.
Who is the real hero?”
~ Mitch Hedberg ~
Who is your hero?
“This is how we know what love is:
Jesus Christ laid down His life for us.”
~ 1 John 3:16 ~

My apologies for being absent. EMS took Mom to hospital a week ago Monday and my time has been spent with medicos and family. Mom is doing, as they say, “some better” but your prayers are requested and appreciated. (This all makes my whine about furniture, people not showing up, etc. seem rather trifling in comparison, eh? /smile/)

GO.
Be someone’s hero.
Make a difference in someone’s life.
Grace, love, mercy and peace be multiplied to you.
Share
Pin
Email
« Previous Post
Sabbath Keeping – I bless you »