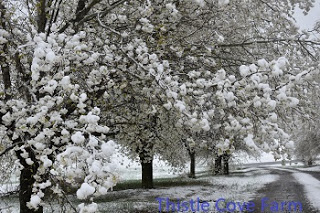 Every morning, after tending to cats and dogs then having devotions, I sit and think. I ponder the day, consider the weather and decide what needs attention on my to-do list. There are times I simply rush into the day and put out the fire that’s needing the most attention but as that’s not such a judicious use of my time, I usually sit and think.

Lists are my best friend as are notebooks and this morning my to-do list got a good deal of attention. By 9:30 I was at the barn (not such a big deal considering I was up at 5:30), feeding cats and horses. The to-do list was left in the house so I took a gander and decided to ride up the driveway. I like to take a quick ride every morning, check out the pond, shed, land, etc. and make sure things are good and nothing needs immediate attention. I noticed a few tree branches that needed lopping then rode to the shed and noticed some branches behind the shed were rubbing the shed. It’s easier to take care of problems before they get worse so I returned to the barn for my Fiskars 24 inch Titanium Anvil Ratchet Lopper. 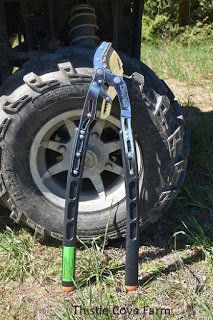 When I saw these in the store, I had to talk myself into buying them; at almost $50 (not including tax) these babies aren’t inexpensive (not to my way of thinking anyway). Now that I’ve used them for a while…I’d gladly hand over $50! The packaging says it’ll handle branches of 2 inches but I know for a fact it’ll do better than 2 inches! It has a ratchet, meaning once the titanium blade bites into the branch, I open the blade, let it back up until it clicks (yeah, you’ve loving this tech talk, aincha?! 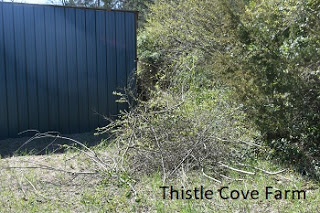 This is about half the brush I cut and it’ll stay here until I can get help; I don’t like to burn by myself, too dangerous. While cutting brush, I discovered a 14′ galvanized gate someone had pushed to the side; it still has the hinges attached and brand new costs more than $300! I mention prices because it absolutely amazes me someone would leave $300 on the ground; essentially, that’s what they did by not putting this gate under shelter, taking care of it. Fortunately, galvanized steel is strong and lasts; this gate is going to be put to use at the shed where it’ll keep tractor and equipment (blade, bucket, mower deck, hay spear, pallet forks) behind lock. 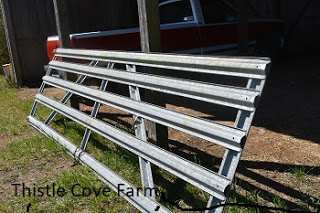 While I had the tractor out, I decided to move the plastic pallets from behind the barn to the shed. I eyeballed the HayHut and noticed the horses were finished their hay bale so moving hay was the next chore. Perhaps I’ve mentioned the HayHut before, but if not and you have horses, this thing is a gem! The HayHut covers an entire round role, preventing rot from weather and giving the horses some measure of protection while they’re chomping down. 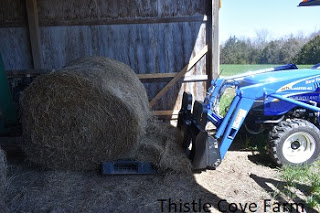 Nothing is ever easy, is it? This 800 pound hay bale is mostly off the pallet so….I had to get in front and push that sucker onto the pallet. Fortunately, round is easy to push…lol. 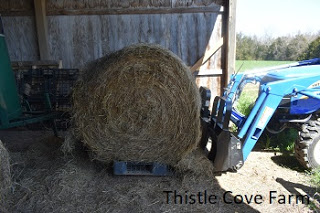 Some days I take a lot of photos…in case there’s an accident, I want to be as much help as possible in assisting the law in figuring out what happened. (gallows humor) 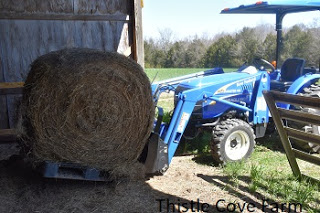 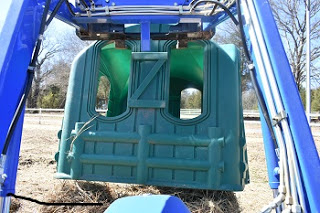 Using the pallet forks, I lift the HayHut off the old bales and move it to the new bale. (The black line, lower left, is some dumb thing I managed to do…please ignore.) 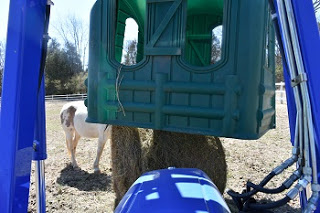 Please note the terrified beast standing left of the HayHut as it’s being lowered over the new bale. Dandy Man decided he HAD to begin eating and was severely put out the HayHut made him move. No Fear Farm is our new name. 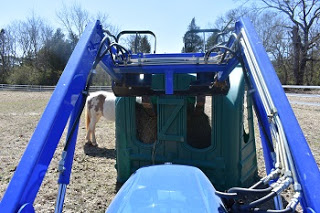 HayHut positioned over bale as pallet forks are lowered so I can back away. Dandy Man is still totally unconcerned with entire process. Later, I misplaced (lost…haha!) some keys and searched for them in this pasture. Dandy Man decided we hadn’t had much lovin’ so he followed me so he could rest his head on my shoulder while I whispered sweet nothings in his ear. The keys were, eventually, found near the shed in the exact last place I searched.

The rest of the afternoon was spent searching for Pixie and Inky who decided to go walkabout but were both found, crying like lost orphans. Animals aren’t encouraged to wander from the house and barn but when they do wander, I look for them until they’re found. 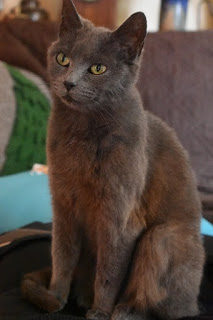 This is Ole Bones, Pixie and the Inkspot’s mother. About two years ago, Bones wandered up the driveway, malnourished, thin as a whisper and said, “Please take care of me.” It took about six months of constant TLC, de-worming, food full of calories, fat and protein (the other cats were jealous!) before she started looking any where near fit. I asked Dr. Anne, “Do you think she’s healthy enough to be spayed?” Dr. Anne said, “For 120 years old, she’s in pretty good shape!” Now, we all know Bones isn’t 120 years but she is ancient; however, ten weeks later she delivered four kittens…three black males and one Siamese female. Those four are Pixie and the Inkspots, aka Inky One, Inky Two and Inky Three because there is NO difference between them! 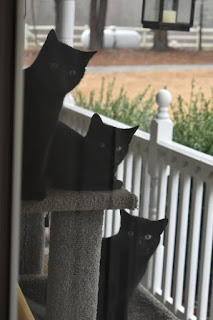 You know you run a lax household when you find a potato on the floor…apparently, one of the kittens pushed it out of the bowl and was playing with it like it was a ball! 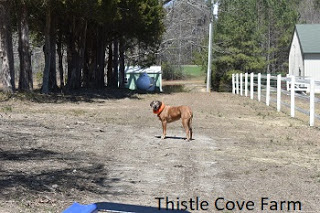 Someone mentioned from a distance, Sadie looks like a fawn. I immediately put this hand knitted blaze orange scarf around her neck. Just before going to the barn, she comes to me, looks up and waits for her scarf to be placed around her neck. 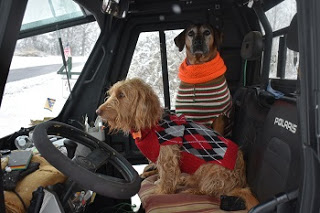 Sam doesn’t have a scarf, yet, but both wear sweaters when it’s nasty cold. Like it’s been this “spring”. Ahem. As you can see, Sadie wears both scarf and sweater like to the manner born.

I mentioned my raised beds…Quin at Comptonia is having a seed giveaway. (psssttt…Quinn did the beautiful watercolors on the seed packets!) My plans include ordering apples from Tom Brown in NC from Apple Search. Tom is a lovely man, truly dedicated to finding and saving heritage apples and buying from him aids in saving those apple varieties. Big Horse Creek Farm, in Ashe County, NC, also saves old apple varieties. If you do visit them, be sure and visit Ashe County Cheese for some of the best butter and cheese you’ll ever eat!

In Virginia, the Vintage Virginia Apples at Albemarle Cider Works is the place to buy apples and drink cider. I adore cider and, years gone by, my family has gathered to press apples for cider. Remember Johnny Appleseed? He planted spitter’s, so called because they were so tart when you bit into one, you’d immediately spit it out. But those spitter’s make the BEST cider, ever!

Spring sprung with a (hopefully last) blast from Ole Man Winter. We had three inches of snow, schools and churches were cancelled and I stayed home. 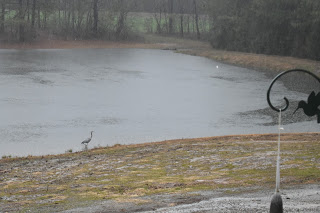 The day after the snow, this heron wandered the pond bank, walking all the way ’round to the upper side. He’s a frequent visitor, along with the Canada Geese. 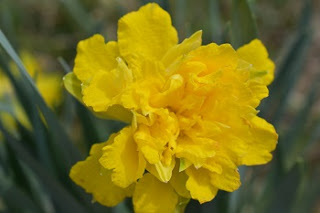 Daffodils are showing their beauty everywhere; spring must be close!

Ponder this ~ “No winter lasts forever. No spring skips its turn.” ~ Hal Borland ~


P. S. Not ONE solitary thing on my to-do list was marked off today. NOT ONE! Note to self…next time, stuff list in pocket.