Every now and again the flat top (as Daddy calls the lap top) computer likes to sleep in. Yesterday was such a day; for whatever reason, it wouldn’t start and that’s the reason there’s no Sabbath Keeping post. That sort of threw my entire day off kilter and, after church, I spent the day inside except for tending to horses before dark. I was so off kilter I completely forgot about the new Bible study starting at 5 p.m. and only remembered twelve hours later when I was having morning devotions at 5 a.m. 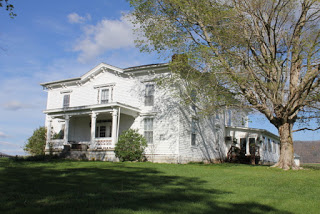 Folks have sent e-mails asking for more of the story as well as photos; here ’tis:

Above, the place Dave and I married and built a life together was built around 1870 (click here for photos) and we were the third family to live there. That farm, with many, many acres for sold for $300.00 in back taxes to Abindigo White; this would have been around the time of the Late Great Unpleasantness. Dave’s mother was dandled on her Grandfather’s knee, he being wounded during that War and claimed he was unfit for labor thereafter. Somehow he managed to sire more than two handful’s of children, a fact Dave and I found enormously humorous. Dave’s mother didn’t see that same humor and was sorely put out with us.
During Christmas holidays, 1900, the original brick house caught fire (some say it started in the kitchen) and burned to the ground. When a farm hand rode a quarter mile to Joe White’s Store, where Mr. White was playing poker, to tell Mr. White his house was burning, it’s reported Mr. White said, “Let ‘er burn. I’ll just build me a bigger and better one!”  Mr. White was known for his fondness for poker and after Mr. Thomas Hawkins, Master Carpenter, finished the job, Mr. White proposed they sit down to a game of poker. The stakes? If Mr. White won, he didn’t pay Mr. Hawkins and if Mr. Hawkins won, he’d get double.
Mr. Hawkins walked away with the whiskey in his belly and went on to build many fine homes in southwest Virginia.
In 1948, Mr. White sold the farm, with many, many acres, to Mr. Gillespie, a relative of Dave’s through his mother, and in 1995 Dave and I purchased the broken down homestead, outbuildings and almost thirty acres of land from the original Mr. G’s grandson and Dave’s cousin.
It was here God gave me the reality of the dream He put into my six-year old heart. Both Mom and Daddy’s people were agrarian’s, both families being raised on hard scrabble farms in Appalachia. Daddy’s Mothers’ people were Scot’s (Scotch being the tape…ahem) Irish and Mom’s people, near as I can tell, were also from the United Kingdom. Dad’s oral history, from his oldest sister, my beloved Aunt Bonnie, says our people came across the English Channel via Brittany or Normandy but almost certainly before either were so called by their “newer” names (newer being a relative word).  It’s interesting, to me at least, I’m the fairest in the family and am easily identified as Celt, Scots or Irish. I’ve been blessed to live twice in a land I describe as a thin place; a holy space where God is close. Then again, that could be because I’ve walked the land and dedicated both farms for His use and glory. God’s glory cannot be contained in either a beautiful location or between two people; God’s glory, like God Himself, simply IS. 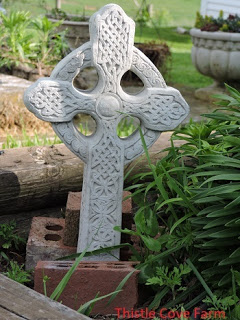 Christian Celts, or Celtic Christians if you prefer, believed there are places where God’s presence or spirit is more accessible than other places. A place where heaven and earth seem to touch, rather reminding me of the Sistine Chapel ceiling where God and man almost touch fingers and where the Holy meets human, reminiscent of the Garden, prior to the Fall. I believe it’s possible for two humans to experience, between them, such a thin place. A place where the Holy Spirit is at work in such a way as to pull back the Veil and a glimpse of Heaven disturbs the normal and make us Homesick if only for the briefest of moments. God’s grace is both mysterious and a gift and it makes some uncomfortable. If they can’t understand it, it must not be “real” Christianity or so say some modern preachers. In millennium gone by, mystics such as Julian of Norwich or Hildegard, were revered and I find it unfortunate modern day folks have to drag feminism into the fray. Just as the Twilight series dirties the blood of Christ, feminism dirties the purity of mystics.
How like us to decry that which we do not understand. As Shakespeare’s Hamlet said, “There are more things in heaven and earth, Horatio, than are dreamt of in your philosophy.” I say, “Let God out of His box; He’s more than capable of handling His affairs than are we!”
The Celts said, “Heaven and earth are only three feet apart but in thin places, closer than three feet.” Perhaps the most famous thin place is Iona, where Christianity in Scotland began and is on my “to-visit” list…soon.
Gosh! That was some tear, eh?
Someone help me down off this soapbox, please! 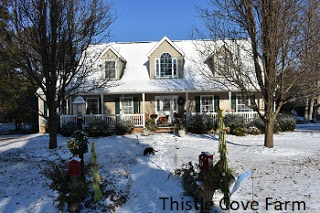 My new home is a manufactured home, meaning it was built in four sections in a factory, trucked to this location and fitted together. In its own way, it is as amazing as the first farm house. Inside walls are twelve inches thick, it has lovely insulation, propane fireplace, house generator and, thanks to my nephew it has a whole house surge protector! While it has three floors, everything I need is on the center floor…master bed and bath, living room, half bath, kitchen/dining room combination, sun room turned into office and a laundry room. From the laundry room is a deck which will, soon, have a roof and be screened in so I can have an outside room.  Upstairs has two bedrooms, full bath and a sitting room. with a marvelous view due to an entire bank full of windows overlooking the pond. (Other photos here and here.) I intend to have a small chapel, perhaps seating six people, placed on the other side of the pond…no heat, no a.c. but with lots of windows with screens and a small alter. to kneel in prayer. A place to sit and ponder God’s Word, His holiness; a place to sit, pray then meditate. Among the Holy Place a Holy Space to partake and witness the Thin Place thick with His love. 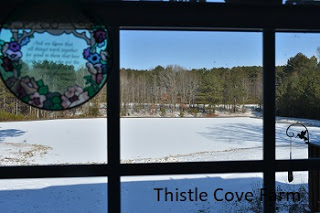 This view is while standing at the kitchen sink, over looking the pond and, into the distance, my far field. Current plans include a raised garden bed for veggies and cut flowers and a small orchard. Putting all between the back driveway and pond ensure water when summer’s heat threatens the life of the plants. 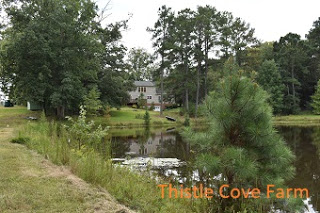 This was one of the first photos, taken from the pond’s dam, looking toward the house with that beautiful view blocked by lots and lots of trees. 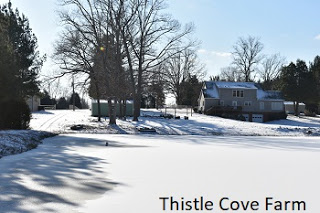 All the one hundred foot pine trees have been cut down and the other trees, both beside the pond and beside the studio (to the left of the house) have been trimmed. Pine trees have very shallow roots and I didn’t want to take one stormy night with my house caved in half. Yes, the pond is frozen but not totally over; it’s not safe to skate or walk across. 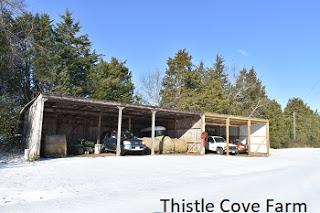 The original pole shed are the three bays on the left. The three bays on the right were added right after I moved in and already it seems the space is used in full. The tractor and equipment are hidden from view and when it’s warmer, I’ll re-arrange again. I like a tidy place, can you tell?

Yet again, God has blessed me with His grace, mercy, love, holding me in tender loving care. Once again God has brought me to a place where He not only cherishes me but lets me know I am cherished. None of us could count His myriad blessings. Oh, we could count the ones we know…breath in our body, food and drink, clothing, a Bible…but there are too many to count of His unknown blessings…safety when we didn’t know we were in danger, protection from the ill will of another and on and on and on…

I’ve downsized in home, about half, and increased in land, more than half again and am, again, caught in one of His thin places. Like Daddy says, “I’m ready to go but I’m not homesick” and will enjoy God’s peace, calm, joy, content to rest and work in Him until I go Home. Folks say, “Be blessed” and that’s all right but I say, “God bless you” because I want His blessings. I ask for His blessings and I also give His blessings away because God cannot fill an already full vessel.

We are blessed to be a blessing.

“Our Lord is great, and great His praise
From just this one small part of earth,
Then what of the image of His greatness
Which comes from the whole of His fine work?
…What of the greatness and pure loveliness,
Of God Himself?”